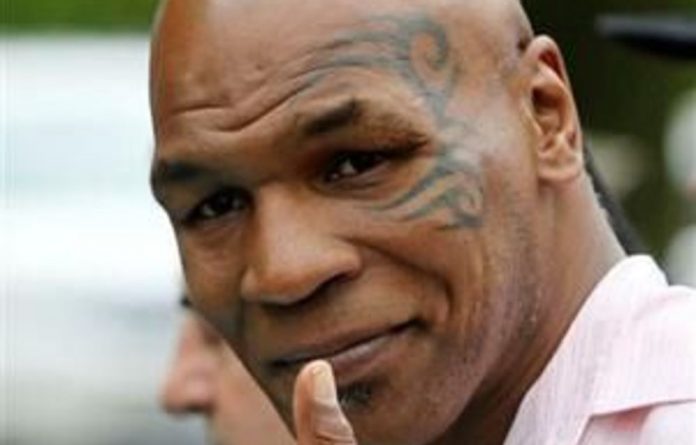 It took Mike Tyson many years to travel the road from Catskill to Canastota in New York. A betting person might have got good odds a few years back that any induction of Tyson into the International Boxing Hall of Fame would be of the posthumous variety.

But Tyson was very much alive on Sunday, his daughter on his lap as he smiled and waved at fans gathered for the boxing hall’s annual parade. The out-of-control character he once was is the only thing dead now, and Tyson tries to bury his former persona even deeper every time he opens his mouth.

The crooked smile and bizarre tattoo on his face are the only reminders of the day when the now slimmed-down vegetarian and budding movie star was indeed the baddest man on the planet. He doesn’t even look like a heavyweight anymore, much less one who would terrify opponents long before they entered the ring.

But they don’t induct bit players in Hollywood comedies into the Hall of Fame. You have to at least play a fighter to get in the boxing hall, which was how Sylvester Stallone also found his way there on this day.

The best fighter among the inductees wasn’t even Tyson. Julio Cesar Chavez, the Mexican who relentlessly beat down almost everybody put into the ring against him, was a much more accomplished boxer than Tyson and was as feared by smaller fighters as Tyson was by the heavyweights.

The best speaker was Stallone, who closed his talk with a famous line from the Rocky movies, telling the crowd in Canastota, “Yo, Adrian, I did it.” Tyson, meanwhile, was so overcome by emotion that he couldn’t even finish remarks that were meandering at best to begin with.

Yes, Iron Mike was crying. Crying unabashedly, as he tried to honour the memory of the late Cus D’Amato, who became a surrogate father to him growing up in nearby Catskill.

But if this was a way to finally close a career that no longer needs closure, consider it done.

The Mike Tyson who was honoured for his work in the ring is still a fan of the sport that made him rich and famous at an age where he had no idea how to handle either money or fame. He still appears at big fights in Las Vegas, where he is always greeted by fans with the biggest applause of anyone sitting ringside.

They remember the fighter who wore black trunks, no socks, and threw left hooks so powerful they knocked guys down even when they missed; the fighter who instead of celebrating was more likely to walk over to his vanquished opponent to make sure he was all right; the fighter who was so fascinating they couldn’t take their eyes off of him even as his life spun out of control.

One-trick pony
What they don’t remember is that Tyson was a one-trick pony, a fighter who relied on intimidation and brute power to make up for what he lacked in boxing skills. His corner men would call out numbers for punch combinations they wanted Tyson to throw, but by the time he became the youngest heavyweight champion ever at the age of 20 he was pretty much done listening to anybody about anything.

His career peaked with a string of knockouts in the late 1980s, including a 91-second KO of a petrified Michael Spinks in Atlantic City. But Buster Douglas stopped him in one of the biggest upsets ever in 1990 and things pretty much went downhill from there. While he looked ferocious again briefly after serving prison term for rape, he was unmasked by Evander Holyfield for good in 1996 and from there it was just a matter of chasing paydays.

Look at his record objectively, and there’s no way he goes down as one of the great heavyweights ever. But no one — especially those among us who were along for the ride in his brief prime — ever looked at Tyson objectively.

He’s Hall of Fame material just for being Mike Tyson. There was nothing more spectacular than a Tyson fight, nothing more electrifying than the wait just before the opening bell.

That he survived prison, drugs, street fights and the people who always had a hand in his pocket is remarkable enough. That he has reinvented himself in recent years as a lovable philosopher and student of life is way more remarkable.

“You reach a point in your life where you find out all you believed in life was a lie and you want to start life all over again,” Tyson told me a few months ago. “I want to be a good person, not just be known as a great person.”

He predicted before going to Canastota he would not make it through his speech before breaking down, and he was right. Memories of his beloved Cus were too close to the surface

But that was all right to the several thousand fans who cheered him with chants of “Come on Mike” as he struggled for words.

Seeing Tyson there alive and — and quite well — was more than reward enough. — Sapa-AP