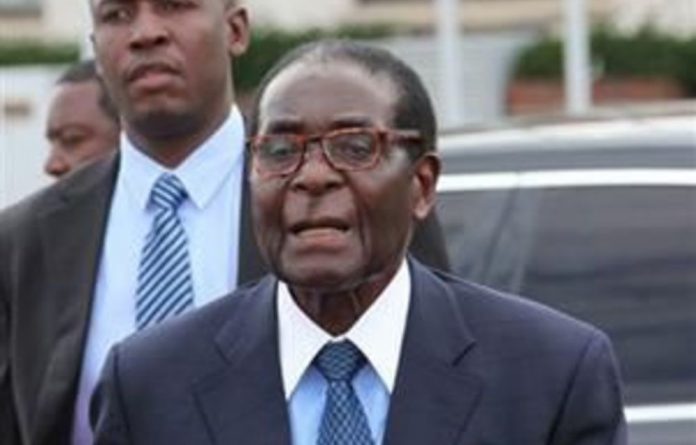 Leaders of the 15-nation Southern African Development Community had discussed Zimbabwe late on Saturday on the eve of a free trade summit. After failing to reach a decision, they resumed talks after Sunday’s trade meeting.

None of the leaders spoke as they entered the closed-door meeting.

The region’s security “Troika” body in March issued a unusually sharp rebuke to Mugabe, demanding an end to political violence and insisting that reforms promised in the so-called Global Political Agreement are implemented.

That agreement created the unity government between Mugabe and his rival Morgan Tsvangirai, now the prime minister, after failed elections in 2008 ended in spiral of deadly political unrest and economic collapse.

Together they were meant to oversee the drafting of a new constitution and hold elections, but the process is running a year behind schedule, a delay that the Troika blamed on Mugabe during the March meeting in Livingstone.

“In the past, it had a softly-softly approach to our situation. I think the last thing that SADC wants is to look toothless, not only to Zimbabweans, but to the international community, after their robust approach.”

Now the full summit is expected to sign off on a roadmap that will lay out a new timetable for the constitution and later elections.

Neighbouring nations had previously handled Mugabe with kid gloves, and the pointed statement in Livingstone drew a fierce reaction from the 87-year-old president and his party, which questioned the integrity of South African President Jacob Zuma.

Groundwork
That provoked a diplomatic spat with Zimbabwe’s powerful neighbour, and Mugabe’s Zanu-PF has since softened its tone, perhaps realising the risks of alienating its most important trade partner.

Christopher Mutsvangwa, part of the Zanu-PF delegation at the talks, said a three-hour meeting on Friday with Mugabe and Zuma had laid the groundwork for the summit.

“The matters discussed involve the requirements of the GPA that will pave the way for the new elections, like the drafting of the constitution,” he told Agence France-Presse.

“We also want to minimise external interference. We are glad that the issue of the country’s security forces which was being drawn into the mediation talks has been put aside,” he said.

The security forces remain firmly in Mugabe’s grip under the power-sharing arrangement, and Tsvangirai’s Movement for Democratic Change has voiced alarm over the recent tendency of military leaders to wade into politics.

Amnesty International has also accused the security forces of complicity in a wave of violence against MDC supporters this year.

Tsvangirai wants SADC to endorse polls for no earlier than 2012.

Election officials say the shambolic voters roll — an estimated one-third of the people on it are dead — will never be ready this year. The finance ministry says it has no money for elections.

Whatever SADC’s roadmap said, the question is how the region will ensure its decisions are implemented after the original timetable was so thoroughly ignored, said Amnesty’s Zimbabwe researcher Simeon Mawanza.

“Even when the roadmap is adopted, they have to put a very strong oversight mechanism,” he said. – AFP

SADC: How are we behaving?