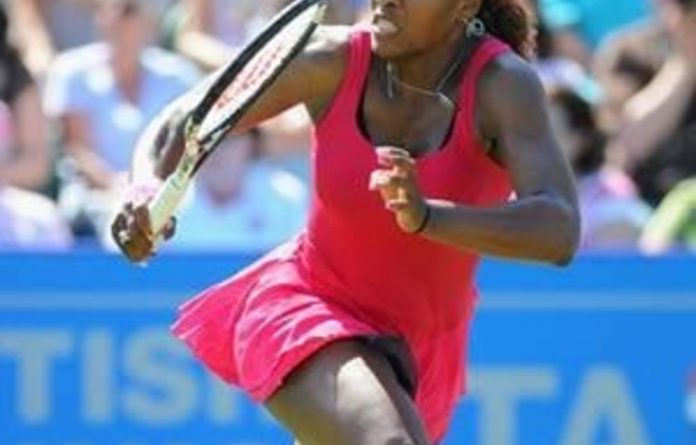 Serena Williams came back from a slow start on Tuesday to reach the second round at the Eastbourne grasscourt event after not playing for nearly year, posting a 1-6, 6-3, 6-4 defeat of Tsvetana Pironkova.

The 13-time grand slam champion American, who last played in a winning Wimbledon final in July, returned to the court at the grass warm-up tournament after battling a foot injury and blood clots in her lungs.

Despite her 0-5 start against her Bulgarian opponent, Williams won in just over two hours of battle with seven aces as she tries to whip a rusty game into shape. After one particularly long exchange, the former number one was warned for time-wasting as she tried to catch her breath.

Williams will get another test in the second round when she faces the winner from top seed Vera Zvonareva and British wild card Heather Watson.

The Williams win was the second success for the family this week after sister Venus advanced on Monday after not playing for almost five months due to an abdominal injury. Unseeded Ivanovic took a small step in the rehabilitation of her inconsistent recent game, with her victory over Goerges.

Good times
Ivanovic has been through several coaches and consultants in recent seasons as the number 18 fights to settle and finally start improving her ranking. Currently without a coach, she is sharing the time of Adidas’ Darren Cahill along with the rest of the marque’s top players including coach-less Andy Murray.

“It’s been good times and it’s been not so good times in the past year,” said the Serb. “I did play really well at the end of last season [to win a year-end event in Bali], also some bits and pieces this year.

“But in the last few weeks I’m starting to gain more confidence again. I have things that I have to work on and work on while the attitude during matches. It’s been a good last couple of weeks for me in that sense.”

Brit Elena Baltacha did the home crowd proud as she beat slumping Frenchwoman Aravane Rezai 6-2, 6-1 to next face third seed Victoria Azarenka. Number 61 Baltacha’s victory was her first on grass this season after a loss last week to start in Birmingham.

On the men’s side of the dual event, South African sixth seed Kevin Anderson started with a victory over a Brit qualifier as he defeated Alexander Slabinsky 7-5, 6-3.