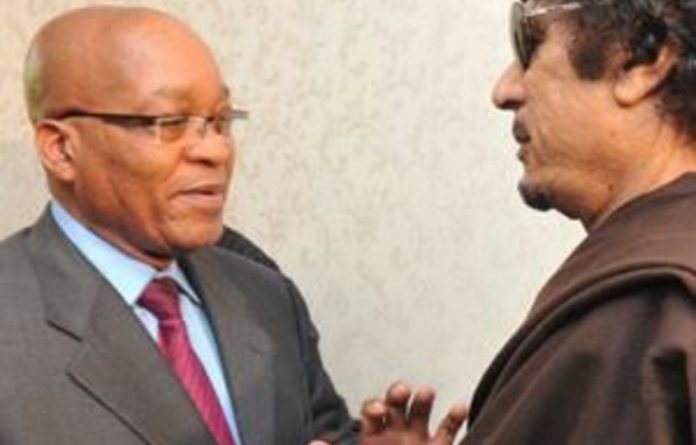 Nato is instead misusing the resolutions to drive regime change and “political assassinations” Zuma said on Tuesday.

“We have spoken out against the misuse of the good intentions in Resolution 1973, which was co-sponsored by the Arab League and supported by African countries in the UN Security Council.

“We strongly believe that the resolution is being abused for regime change, political assassinations and foreign military occupation,” Zuma said in a speech to Parliament.

Zuma held “lengthy discussions” with Muammar Gaddafi last month but failed to close the gap between the Libyan leader and rebels on a peace plan proposed by the African Union.

He said Nato’s actions undermined AU efforts in finding solutions, saying: “It also flies in the face of all efforts to promote the sanctity of international law.

He said he hoped a briefing by an AU committee on Libya to the UN Security Council on Wednesday would lead to common ground being found towards a lasting solution to the crisis.

South Africa has consistently slammed the air strikes against Gaddafi’s regime despite voting for the United Nations’ no-fly zone resolution that led to the Nato campaign.

But it has simultaneously condemned attacks on civilians as a “heinous violation of human rights against (Gaddafi’s) own people”.

On Monday, United States Secretary of State Hillary Clinton on Monday urged AU leaders to abandon Libya’s Muammar Gaddafi, saying it was time to live up to their pledges to promote democracy across the continent.

“It is true that Gaddafi has played a major role in providing financial support for many African nations and institutions, including the AU,” Clinton said in her speech at the AU’s headquarters in Addis Ababa.

“But it has become clear that we are long past the time when he can remain in power.” — AFP, Reuters