Malema: Why must we pay for our land? 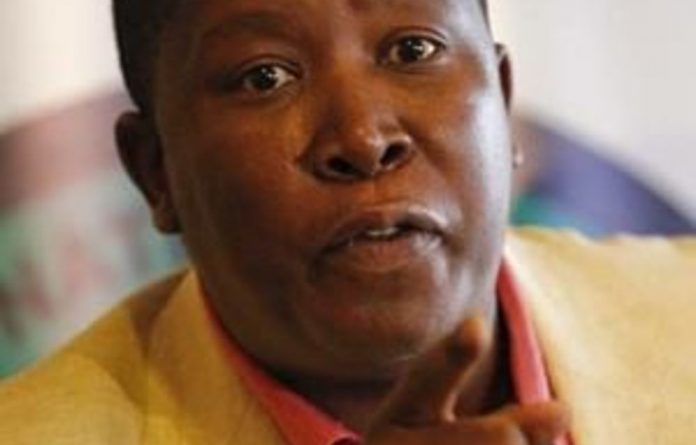 South Africans must take back the land that belongs to them without paying for it, African National Congress Youth League leader Julius Malema said in Cape Town on Tuesday.

“Willing-buyer, willing-seller is not an alternative… The alternative from the youth league is that we take the land without paying. That is what we are proposing,” he told the league’s provincial council at the University of the Western Cape.

While black South Africans had forgiven the previous regime for apartheid, he did not understand why they had to pay for what belonged to them.

“They never bought the land, they stole the land. They did not only steal the land, they converted the owners of the land into slaves … now we must pay for that with the willing-buyer, willing-seller.”

He was speaking ahead of the league’s 24th national congress, which would start in Midrand on Thursday. Delegates were expected to push for the nationalisation of the mines and land redistribution.

The country’s land reform programme is a sore point for government and little progress has been made in the 15 years since the end of apartheid.

The programme originally aimed to transfer 30% of land to black ownership by 2014. But last year Minister of Rural Development and Land Reform Minister Gugile Nkwinte said the government did not have enough money to carry out the programme and that no new target for land reform would be set as there was not enough information to set a realistic target.

South African President Jacob Zuma said at the African National Congress’s 99th anniversary celebration in January that the government would be looking at three forms of land holding — holding state land through leasehold, freehold with limited extent on private land, and allowing foreigners to lease but not own South African land.

He said: “If we as South Africa allow people to keep buying our land, we will end up with a country where other people own our land. This is why we need to be careful in how we handle foreigners who come to buy land.”

Fait accompli
Meanwhile, Malema contends that nationalisation is a fait accompli and the ANC is merely looking for the best way to implement it.

“The NGC [national general council] told us to go and look at the best model of nationalisation. We are no longer talking about whether nationalisation is going to happen or not, it’s going to happen,” Malema said in the documentary Mining for Change: A story of South African Mining, which is being screened at the Encounters Film Festival in Johannesburg and Cape Town.

The documentary was funded by junior miners Nonkqubela Mazwai and Nchakha Moloi, the chief executive and chairperson of Motjoli Resources. Both also feature prominently in it, expressing views about why nationalisation is needed. They are credited as executive producers. Eric Miyeni and Navan Chetty are directors.

But, according to ANC spokesperson Jackson Mthembu, Malema is jumping the gun. “At the NGC we didn’t adopt anything. We said we must look at what the pros and cons are of adopting this policy. We are still at the stage of investigating. You don’t adopt a policy without scientific research,” he told the Mail & Guardian this week.

Mthembu said ANC secretary general Gwede Mantashe had put together a team that would visit 13 countries to study the success of nationalisation in those countries. – Sapa and Staff reporter