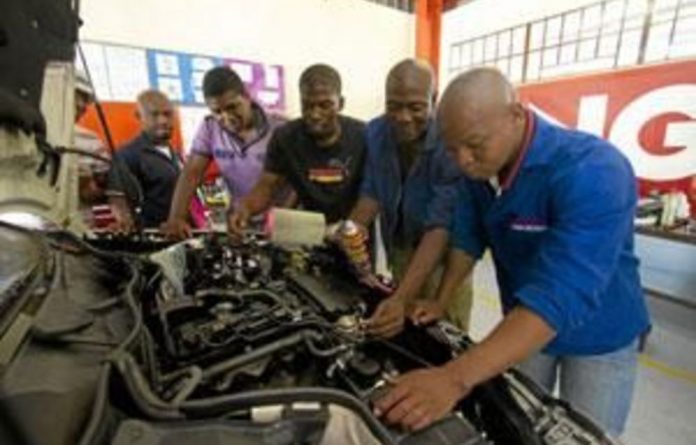 The acting director general of the department of higher education and training, Gwebs Qonde, is correct in assuming that employers in South Africa will want properly qualified people in the marketplace to fill vacancies (“A bridge across the skills gap“, Mail & Guardian, June 3).

Unfortunately that is the only correct assumption in his entire article. His attempt to discredit Suzanne Hattingh (“Making Setas his business“, M&G, May 27) shows his ignorance of the working of his own department’s systems. He seems to assume that there is some capitalist conspiracy to keep “exploited and turned into cheap labour” workers in their place.

Then he makes out a case against what he calls “informal improvement or crash courses”, a “flawed system of service-provider approval” and “short-term interventions to keep them [workers] as perpetual students” by teaching employees along “narrow sectoral interests”. He does not seem to understand that although foundation courses are important and a basic responsibility of the state (not employers), constant learning and updating are essential in the workplace, otherwise industry grinds to a halt.

Has he never heard of lifelong learning? The system that Qonde rails against is one that was agreed to by government, labour and employers alike and is prescribed by the South African Qualifications Authority and the Setas under the Skills Development Act. As a matter of fact, I was there when this system was conceptualised and the unions took a leading role.

Qonde can just ask Adrienne Bird, formerly deputy director general in the labour department and now in his own department. She will confirm this. Qonde makes no mention of learnerships, where most of the Seta work has been focused. Qonde uses disparaging phrases such as “crash courses”, “ad hoc interventions”, “skewing” of Seta resources and private “consultants” (he means private training providers, of course, but consultants have gained a bad odour) to discredit private providers of education and training.

He seems to assume that employers are reluctant to fill the shortage of 800 000 skilled workers, that they prefer short useless courses to keep back workers deliberately and that all private providers are corrupt. The reality is that the levy is for training existing employees (by common consent and at the insistence of the ANC and trade unions originally) and these employees need to be trained formally and informally in the workplace or as close as possible to the workplace in workshops and courses designed for that purpose.

It seems that Qonde thinks that further education and training (FET) colleges do have courses that prepare students for the workplace. Well, the reality is that the new National Certificate (Vocational) — NC(V) — courses were compiled with no input from the private sector and result in abysmal failure rates every year.

Now the old courses (the so-called Nated or N-courses) have been resurrected at FET colleges in high hopes of reviving the neglected artisan training system. However, because the merging of the colleges has been mismanaged, they have lost most of their competent and experienced engineering staff and, with a few notable exceptions, are as dysfunctional as most state schools.

In addition, most of their curricula are decades old — some still, for example, examine students in “office practice” on communications tools such as telex machines and telegrams in the age of email and Twitter. Then there is the example Qonde plucked from the air (with no context) of a 19-day course that cost R60 000 a learner. To me it sounds like a typical tenderpreneur scam, where someone at a Seta passed on a lucrative deal to one of his buddies.

Most one-year learnership programmes cost between R25 000 and R35 000. This compares very well with the government’s cost of teaching the NC(V) programmes. The current cost to the state of one year of NC(V) training a student is R37 212.

However, the failure rate of the first NC(V) intake of students was about 90%, which means it cost R334 908 a student for each year of NC(V) training (because nine out of 10 dropped out). This was just the first year; the failure rates in later years were not much better.

In fact, the department recommended that colleges select students who had already passed matric because no one else seemed able to pass. At the end of the NC(V) course, there is no certainty of landing any form of job; in fact, students just have an FET certificate, equivalent to grade 12 at school, and very little practical training.

So, let us look at some facts. Occupational skills training is delivered by education and training organisations (often small businesses), including FET colleges and some universities, accredited by Setas. These organisations need to advise employers on their training needs, deliver skills training and assess learners with a view to awarding credits toward qualifications.

Providers also need to have a track record, references and accreditation certificates to be contracted to do the training. Mostly they are appointed by the employers and need to compete in the open marketplace.

According to the Skills Development Levies Act of 1998, 80% of the Seta levy money is committed to the training of staff who are already in the workplace. Employers and unions agreed to pay 20% of the levy money into the National Skills Fund. This fund can be used for the training of youths, disabled people, disadvantaged women, among others, at the discretion of the National Skills Authority.

Employers, unions and government have an agreement to use the levy money for the education and training of the staff of levy-paying employers, based on the workplace skills plans submitted by employers. This is why employers and labour unions need to have a say in how the levy gets spent. If they have no say, the levy is after all just a tax, as so many cynics predicted when the ­system of levies was set up.

Their role in our democracy has been invaluable, and they will need our protection and support
National

The family of health department employee Babita Deokaran are devastated at her assassination, but proud of her role as a ‘hero’ in exposing corruption
Advertising