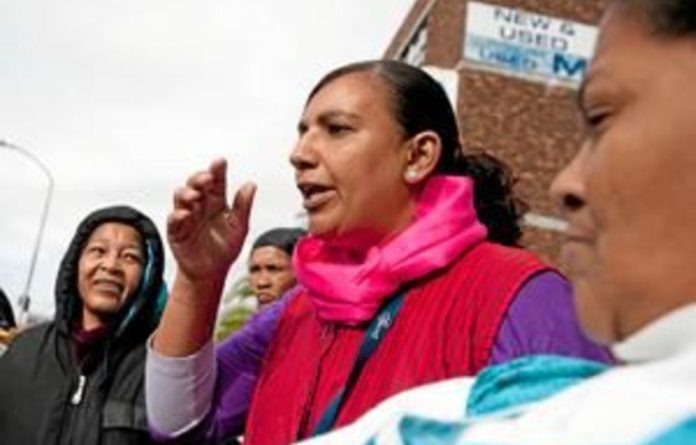 Sixty-year-old Patricia Sylvester, a cleaner at the Bibette Clothing factory in Cape Town, said she wakes up at night in a cold sweat.

“I’m planning to try to retire next year. God help me,” she said. “How can I do it if they’ve lost my pension money?”

Clothing workers who retire receive a lump sum provident fund payout. Sylvester is expecting to receive R50 000, which she plans to invest. But, like thousands of other clothing workers, she is increasingly alarmed by rumours that the provident fund money has been squandered.

South African Clothing and Textile Workers’ Union (Sactwu) officials say that about 20 000 workers are affected, but others claim many more workers stand to lose.

Workers complain that no one at the unions head office is answering their questions about whether their money can be recovered from the investments they have heard were made in Canyon Springs Investments 12 and Pinnacle Point.

“We’re so upset because we really don’t know what is going on,” said one worker interviewed outside the House of Monatic factory in Salt River. “We only know what we read in the papers. Nobody is keeping us informed and it’s our money.” The worker said that Cosatu’s Western Cape leader Tony Ehrenreich had visited the factory recently.

“The factory gave him a new suit but all we wanted to know was what has happened to our money and some of us eventually walked out of the meeting,” she said.

Clothing factory workers earn on average R700 a week and contribute about 6.5% of their salaries to the provident fund.

Workers rushed out during their lunch break to talk to the Mail & Guardian, describing their frustration at being kept in the dark, even by their shop stewards.

Machinist Selena Solomons (50) said she wanted to retire in five years’ time when she should receive a lump sum of R100 000. “I’m very worried. I’ve been working in this industry for 27 years. How can I see it go just like that?” she asked.

Maria Brander, a 49-year-old single mother, is a machinist and wants to retire at 55. She earns R700 a week and pays R50 to her provident fund.

“I’ve been almost 30 years in the industry. I’m very worried because I’m the only breadwinner,” she said. “They are keeping all the information away from us.”

Asked if there might not be a conflict between his two roles, Gamede denied any impropriety. “I resigned as a trustee and my appointment [at Pinnacle] happened long after,” he said. “But anyway, they are now saying I was not confirmed as a trustee of the Trilinear Empowerment Trust.”

Gamede was referring to court papers filed in the liquidation application of Canyon Springs this week, which revealed that he was not registered with the Master’s Office as a trustee of the trust.

In its application to interdict the liquidation of Canyon Springs, the Textile and Allied Workers’ Provident Fund said the financial statements of Trilinear “invited questioning”. Gamede was paid a trustee’s fee of R187 000 and acted as trustee for just over a year.

He is now trying to stave off an application for the liquidation of Pinnacle Point’s assets by Investec, which claims it is owed R85-million. The case has been postponed to August 18.

A German buyer is planning to buy Pinnacle Point Resorts in Mossel Bay, said Gamede, adding that it is hoped that a local interested buyer will snap up its Clarens Golf and Trout Estate.

Asked about the possible sale of the assets, Whelan said: “So we believe. This has been going on two-and-a-half years.”