‘Another night of murder in Tripoli caused by Nato’ 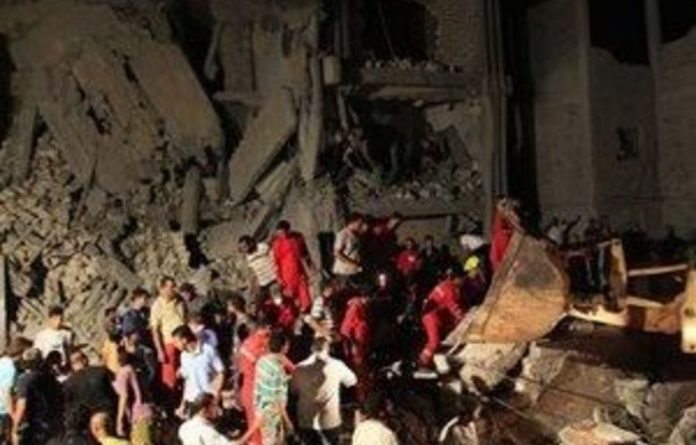 Libyan officials said about seven civilians were killed in a Nato air strike in eastern Tripoli in the early hours of Sunday morning.

Reporters were taken by Libyan government officials to a residential area in the Arada neighbourhood of Tripoli and saw a body pulled out of the rubble of a destroyed building.

“There was intentional and deliberate targeting of the civilian houses,” deputy Foreign Minister Khaled Kaim told reporters at the site. “This is another sign of the brutality of the West.”

There were heaps of rubble and chunks of shattered concrete at the scene, which a large crowd of what appeared to be local residents were helping to clear.

On previous occasions when reporters have been taken to see fresh air strikes, the ruins of shattered buildings would typically still be smoking so soon after being hit. There did not appear to be any smoke at the site the Libyan said was targeted by Nato on Sunday morning.

If confirmed, the incident would be a blow to Nato’s campaign which is aiding rebels fighting the government of Muammar Gaddafi at a time when the Western alliance is debating how to sustain its mission.

‘Another night of murder’
At a local hospital, reporters were shown three bodies, including a child, which government officials said were people killed in the air strike.

One of the bodies was covered with debris and dust. Reporters were also shown a wounded child.

“Basically, this is another night of murder, terror and horror in Tripoli caused by Nato,” government spokesperson Moussa Ibrahim told reporters at the hospital. Five families were living in the building which was hit, he said.

It could not be immediately verified whether the three bodies had come from the destroyed building in the Arada district. Arada is a neighbourhood in the Souq al-Juma district, which is known for anti-Gaddafi sentiment.

Two weeks ago, Libyan government officials were accused by a staff member at the same hospital in a note passed to journalists of falsely labelling a child hurt in a car crash as the victim of a Nato attack.

The incident occurred just over 24 hours after the Libyan government accused Nato of specifically targeting civilians.

After four months of civil war, rebels control much of the east of Libya, the area around the western port city of Misrata and much of the Western Mountain region stretching to the border with Tunisia. – Reuters