Malema turns on his masters 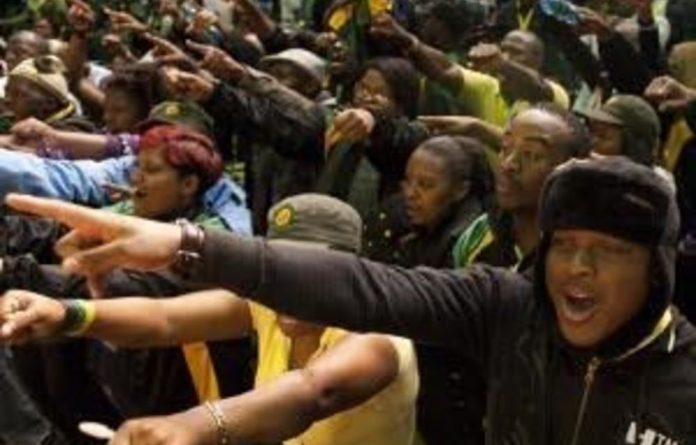 African National Congress Youth League president Julius Malema used his closing address on Sunday to launch a veiled attack on President Jacob Zuma and his close allies within the party’s national executive committee, in what appeared to be the clearest indication yet that the league was moving away from the ANC president and his lieutenants.

Towards a youth league revolution

ANC Youth League president Julius Malema’s message in his closing address at the league’s conference was clear — the time for economic transformation is here, and the league plans to take the necessary steps to make their mandate a reality.

For the first time — the youth league leader, who delivered a two-hour speech at Gallagher Estate in Midrand — Gauteng, spoke of how Zuma and other ANC leaders had tried to use the party’s disciplinary code to kick him out of the league.

The league has not formally pronounced on its preferred candidates, but it was an open secret that it wanted ANC secretary general Gwede Mantashe to be replaced by former league president and Sports and Recreation Minister Fikile Mbalula.

‘Youth are not an empty bucket’
Malema criticised the ANC leadership for undermining the intelligence of the country’s people by misleading them when seeking to use them for political gains.

The war for economic freedom

“The youth of South Africa are not an empty bucket that is waiting for you to fill it with lies. You want us to respect you when you destroy young people. You subscribe to the policy of ‘kill them young and destroy their future’,” said Malema.

Malema was forced to apologise to Zuma early last year after the ANC disciplinary committee found him guilty of bringing the party into disrepute by comparing Zuma to his predecessor Thabo Mbeki. This came after Malema said Mbeki would not reprimand the ANC youth league in public.

Malema told astonished delegates had it not been for ANC treasurer general Matthews Phosa, he wouldn’t be leading the youth league.

“I am a member of the youth league today because of comrade Matthews Phosa, who took a risk to defend me when he knew it could be career limiting. I know that after representing me, he is still facing problems [in the ANC’s top leadership].”

Malema also accused Mthethwa — who serves in both the party’s national executive committee and the national working committee — of withdrawing his state-provided police protection for political reasons.

Malema was granted state protection after it was revealed that his life could be in danger. He accused Mthethwa of withdrawing his bodyguards without informing him.

Mthethwa is among Zuma’s inner circle.

‘ANC said there was no plot’
Malema also lambasted the ANC leadership for applying selective disciplinary rules. He questioned the lack of action against NEC member Billy Masetlha, who publicly lent credence to allegations there was a group within the party who were plotting to oust Zuma and secretary general Gwede Mantashe.

“The ANC said there was no plot. A member of the NEC goes out to say there is a plot. Nothing happened to him. Can you imagine what could have happened if it was Floyd [Shivambu, youth league spokesperson]?”

He said the ANC leadership should treat party members equally.

“We are all members, there are no special members. We are all required to pay R12 [annual membership fee]. If you pay more than R12 then it’s voluntary,” said Malema.

He also accused some in the ANC executive of being opportunists in their public defence of Mantashe, while they knew they were gunning for his position.

Let’s be frank
Malema again mentioned the conference’s resolution to press the ANC leadership to allow open discussions on the succession debate.

“Discussing leadership should not be regarded as a plot. It’s instead a frank discussion about how members want to see the ANC being led. The refusal to allow us to discuss leadership undermines our capacity to strengthen the leadership, including making them aware of what is their weakness,” said Malema.

Malema said that just because the youth league was unhappy with some leaders, it did not mean the party would collapse.

“This thing that somebody should wait with a whistle to tell us when we should start talking about leadership is wrong. We must be able to debate leadership, it must be seen as self-assessment.

“Elective congresses are not about muscling each other out in a show of force but to strengthen the organisation,” Motlanthe said.

Said Madikizela-Mandela: “I came here as a parent to congratulate you and tell you how proud I am with you Julius and Lebogang Maile for proving prophets of doom wrong who predicted a repeat of Mangaung [the congress in 2008 that was disrupted ]”.

She however expressed disappointment that delegates had failed to attend the June 16 Youth Day celebrations with the nation at Orlando Stadium in Soweto.

“We owe the public an apology for the late arrival of president Zuma”.

Motlanthe urged the league to improve relations with the mother body by holding regular meetings. “It’s a disadvantage that the only time the leadership of the ANC and its youth league come together is when there are problems. When there are no issues we don’t meet”.

The congress ended on Sunday evening with a celebration party at Gallagher Estate.