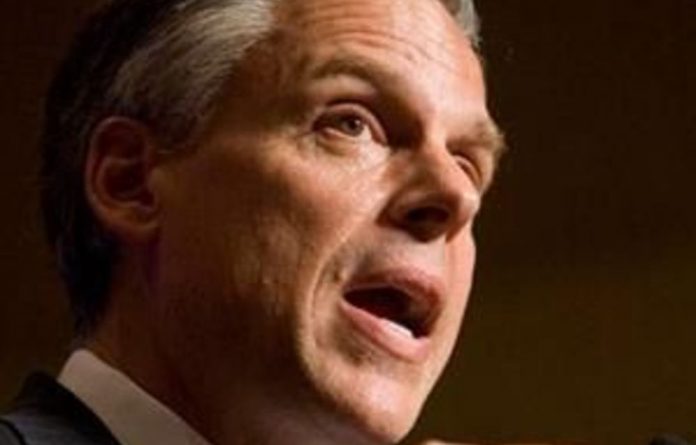 “I’m a candidate for the office of president of the United States of America,” Huntsman told supporters at Liberty State Park in New Jersey, with the Statue of Liberty in the background. The site is where former president Ronald Reagan launched his bid for the White House in 1980.

“For the first time in our history, we are passing down to the next generation a country that is less powerful, less compassionate, less competitive and less confident than the one we got,” Huntsman said. “This, ladies and gentlemen, is totally unacceptable and totally un-American.”

Huntsman (51) is one of the few Republican hopefuls who worries Obama’s re-election team. Fluent in Mandarin Chinese, he upset the White House in April by quitting his job as ambassador in Beijing, a post he held since 2009, to return to home to plan his election campaign.

If he picks up traction in opinion polls, Huntsman could be a rival to former Massachusetts Governor Mitt Romney for the role of the moderate Republican candidate.

‘This guy is different’
Huntsman called for “broad and bold” changes to US tax laws and regulations and said America should seek energy independence and boost job creation, but gave no specifics on his plans.

“We must make hard decisions that are necessary to avert disaster,” the former Utah governor said, painting a bleak picture of what it would mean for the country if it does not reduce its debt load.

“If we don’t, in less than a decade, every dollar of federal revenue will go to covering the costs of Medicare, Social Security and interest payments on our debt. Meanwhile, we’ll sink deeper into debt for everything else — from national security to disaster relief,” Huntsman said.

Congressional Republicans and Democrats are debating how to bring down the US deficit and reduce federal spending. But those talks have made investors worldwide jittery as it raises the spectre, however small, of a US debt default.

The Obama administration has warned it will run out of money to pay bills if Congress does not raise the $14.3-trillion debt limit by August 2 — a prospect that could push the country back into recession and upend financial markets.

Huntsman said he tackled many of the same issues in Utah and managed to keep the state’s AAA credit rating.

A campaign video show on Tuesday characterised Huntsman as a different candidate — a man who dropped out of high school to play in a rock band and who can speak Chinese, who prefers a greasy spoon diner to a fancy restaurant.

“Decent, calm, firm, and disciplined. No drama,” the video declares. “This guy is different.” — Reuters