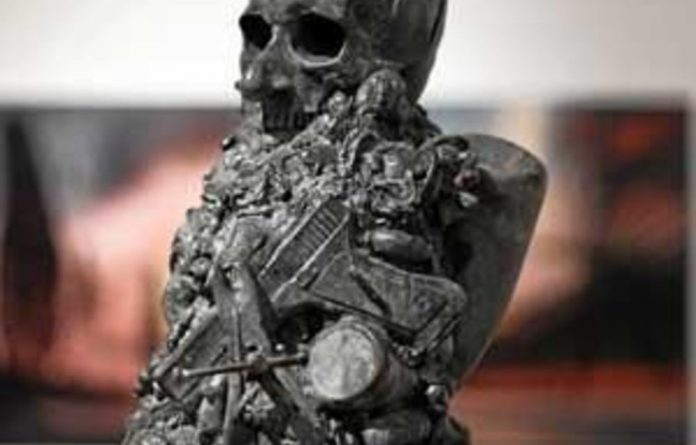 The Race of Man is right at the back of the gallery. But this 19-minute film is remains centerpiece of Michael MacGarry’s new solo show, Entertainment.

A parody of the immersive video game, the film follows players killing each other to advance to the next level. MacGarry locates two of these gaming levels in a desert dune and an unspecified white room. Our own uncertainty about these real and virtual worlds is reiterated when the first two players show an unwillingness to actually kill each. Their collusion against the game’s rules advances them to the next level. But here the two players are unable to escape the prospect of facing each other again. Blinded by bags over their heads, separately tied to the same pole and wielding axes, they eventually stumble into each other with gruesome consequences.

The parody rests in part with the players’ naïve levity at being apparently unaffected individuals with in a virtual game world. The Race of Man probes this chaffing between fantasies and the future, as well as real and imaginary encounters. The film’s excellent production values — including sparse camerawork, sharp editing and a decisive narrative — contribute to making this comic imitation of the video game more an unsettling farce than funny ha ha.

The other twelve works on exhibition include photographs, sculptures and paintings. One of the original players in The Race of Man is represented in a photograph taken at the bloody end of video game. It is also the first work in the exhibition. Onan the Magnificent, the game’s master narrator, is a bronze casting of a ram’s head.

Three weapons originally used in the science fiction sensation, District 9, are also on exhibition (and one of these is re-used in The Race of Man). But MacGarry has studded each of these weapons with nails, screws and other metal scraps. It is one of the artist’s trademark references to the ritualized fetishising of objects in especially central Africa.

Two sculptures of disparate sizes establish another of MacGarry’s abiding interest in the exchange of natural resources for capital and infrastructure development. Fortune and Condition is a small and delicate rendition of an oil well in ivory. It is one of the more overt examples of the artist’s preoccupation with the continuities of colonial and postcolonial exploitation of the continent’s natural resources.

The other, entitled Infinite Progress, is a regulation yellow steel cement mixer studded with steel bars, fencing material, cleat nails, bolts, angle-irons and screws. It is a quiet ritual neutralization of the transacting presence of especially the Chinese in Luanda.

Futuristic cityscapes
MacGarry’s finger pointing at China is literal in one of two large painted landscapes in the exhibition entitled Chinese Iron Ore Frigates off the Coast of Dar es Salam, 2048. Along with a similar painting entitled Abuja, Nigeria, 2034, this futuristic cityscape, imagined in the sentimentality of twilight, offers an idealization of exploitation and prosperity in decades hence.

But the artist’s finger is directed with more complexity in The Republic of Luanda, a limited edition artist’s book. Like Jo Ractliffe’s Terrano Occupado, MacGarry’s rendition of Luanda in book form is made possible partly through the philanthropy of art collector, Charles Skinner, a geologist who has headed De Beers’ diamond operations in Angola.

But unlike Ractliffe’s black-and white photographs, which capture a present-day Luanda snared in the mayhem of the past, MacGarry’s colour photographs hone in on a present-day Luanda bewitched by the madness of a different future. Construction sites, trade shows, hotels, fashion shows, car showrooms all attest to Luanda being the largest exporter of crude oil in Africa, and the site of the largest capital and infrastructure by the Chinese in Africa.

These fantasies and desires for a different future, at once self-directed and determined by others, creates real and imagined worlds that lead straight back into the sensory experience of MacGarry’s film. There is a highly satisfying circular movement in the way the curation of this exhibition at Stevenson Johannesburg deftly negotiates a series of similar ideas in films, sculptures and photographs that are intricately reiterative rather than boringly repetitive.

MacGarry’s work is sharp-witted and playful, but also just serious enough to be startlingly poignant. He has clearly formulated positions regarding the causes and conditions of social and economic realities in Africa, resulting in artistically confident renditions of our blind and easy drifts into futures resplendent in fantasies and unreality.

Former Constitutional Court justice Albie Sachs is bound to art and politics by love and lineage. He chats about this and his years of art collecting.
Read more
Friday

SA artists have used the figure of Nelson Mandela as their muse and metaphor, depicting the many sides of the man people believe they know well.
Read more
Advertising
Continue to the category
Coronavirus