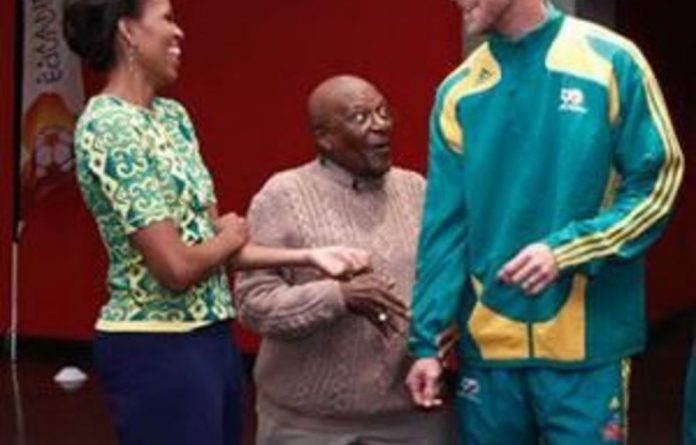 United States first lady Michelle Obama met Archbishop Desmond Tutu on Thursday on the last leg of a South African tour that has honoured the icons of the country’s struggle against apartheid.

Obama met the Nobel Peace Prize laureate at Cape Town Stadium, built for last year’s World Cup, where she took part in a programme for local youths encouraging them to protect themselves against HIV/Aids and use sport to stay healthy.

US First Lady Michelle Obama addressed a packed Regina Mundi Church in Soweto on Wednesday morning, inspiring hundreds with her powerful speech. Watch our excerpts, as she encouraged young South Africans to to be the generation to change their country and the world.

Obama and Tutu then took to the pitch, dribbling balls with local youth groups.

The first lady, who is travelling with her mother, a niece and nephew, and her daughters, Malia and Sasha, clearly relished sharing another chapter in the history of South Africa’s freedom struggle with three generations of her family.

The retired cleric asked her: “What do you feel? How are you feeling being here?” Obama answered, gesturing to her daughters and her brother’s children: “It’s not about us now — it’s about them.”

Tutu, the former Anglican archbishop of Cape Town, won the Nobel Prize in 1984 for his non-violent struggle against the racist government. He has been called the conscience of the nation.

The White House has cast the first lady’s six-day southern Africa visit as a mix of policy trip and personal pilgrimage.

Obama gave a nationally televised speech Wednesday that encouraged young people to engage in the fight against Aids, corruption, and violence against women, closing with her husband’s 2008 campaign slogan, “Yes we can”.

But the trip has also been full of more personal moments exploring South Africa’s liberation history with her family, including a rare visit on Tuesday with Nelson Mandela and a tour of the Apartheid Museum in Johannesburg, which chronicles the rise and fall of white-minority rule.

Pictures of the meeting with Mandela dominated front pages, with the liberation icon smiling and looking healthy.

The 92-year-old has received few guests since being hospitalised earlier this year for an acute respiratory infection.

The family was scheduled on Thursday to visit the prison cell on Robben Island where Mandela was held for most of his 27 years in prison, but the tour was cancelled due to bad weather that made the ferry journey impossible.

They instead visited the District Six Museum, which tells the story of a Cape Town neighbourhood that was declared a white area and bulldozed to the ground, its residents forcibly removed by the apartheid regime.

Obama also met with local education officials and youth at the University of Cape Town, where she brought along a group of students from poor neighbourhoods.

“You can fit in here too. This is a place for you,” Obama told them. “Getting into a school like this isn’t some kind of magical process. There is no magic dust that helps students succeed. Nowadays it is really about how hard you are willing to work.”

US officials are describing the visit, which began Monday, as Obama’s first major solo overseas trip as first lady.

It is her second official trip to sub-Saharan Africa, after a 24-hour stop in Ghana with her husband in 2009.

Obama made her first solo trip as first lady last year, stopping briefly in Haiti before continuing on to Mexico for a three-day visit.

After Cape Town, Obama and her family leave Friday for neighbouring Botswana, where they will go on safari on Saturday. — AFP