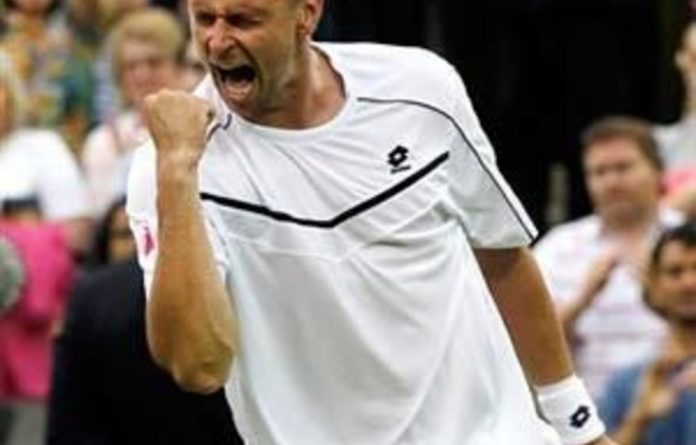 For two sets Robin Soderling gave Lleyton Hewitt a gilt-edged opportunity to spring a major Wimbledon upset without even having to call on his copious reserves of heart and guts.

But the Swede remembered he was the world’s fifth-best player in the nick of time, denying the Australian former champion a third-round place with a 6-7 3-6 7-5 6-4 6-4 victory in nearly four hours under the Centre Court roof on Thursday.

“I knew if I could raise my game after the first two sets I had a good chance,” Soderling told reporters.

“I thought I was a bit unlucky to lose the first set, I knew I was serving pretty well. It was nice to see him [Hewitt] injury-free and it was the best match we have ever played. He is a great fighter.”

The final outcome looked highly unlikely in the first two sets as Soderling reeled off a succession of unforced errors and Hewitt played tidy and consistent tennis.

Roared on by a pocket of loyal green-and-gold clad fans who sang a hearty rendition of Advance Australia Fair as the players warmed up, Hewitt only needed the occasional trademark cry of “C’mon” and mini fist pump to take control of the match.

His booming serve began to work better in the third set, however, and the 30-year-old Hewitt, whose career has been blighted by injuries in recent years, made more unforced errors.

Serving at 5-6, the Australian suddenly found himself break point down and Soderling pounced, pumping his chest in relief after clinching the set.

The aces started flowing from Soderling’s racket in the fourth set and Hewitt struggled to make an impression on his opponent’s serve.

Soderling again managed to break at the crucial moment and send the match into a deciding set.

Hewitt roared a huge “C’mon” after holding serve at 1-1 and when he broke Soderling in the following game an upset loomed again.

But Soderling raised his game to break straight back and at 5-4 he produced a brilliant forehand crosscourt winner to help set up three match points, the first of which he converted when Hewitt lamely netted a forehand.

Soderling sunk to his knees and beat his chest before the players left the court to a standing ovation.

Hewitt, Wimbledon champion in 2002 and US open winner in 2001, tried to remain positive after the loss.

“It’s hard at the moment. But in the end, I feel like I hit the ball pretty well,” he said. “I hit it a lot better than I did a couple days ago and I needed to play against a guy like Soderling.

“It’s just one of those days. The roof closed I think helped his game, as well. So it’s little things like that you’ve got to try to put behind you as much as possible.”

The third-seeded Chinese squandered two match points in the third set to give Lisicki a chance which she grabbed with both hands when she got a break back in the next game.

The German world number 62 then clawed her way in front and sealed an emotional victory on her third match point when Li sent a forehand wide.

Lisicki burst into tears as she dropped to her knees in celebration after booking a clash with Misaki Doi of Japan, the world number 133, in the third round.