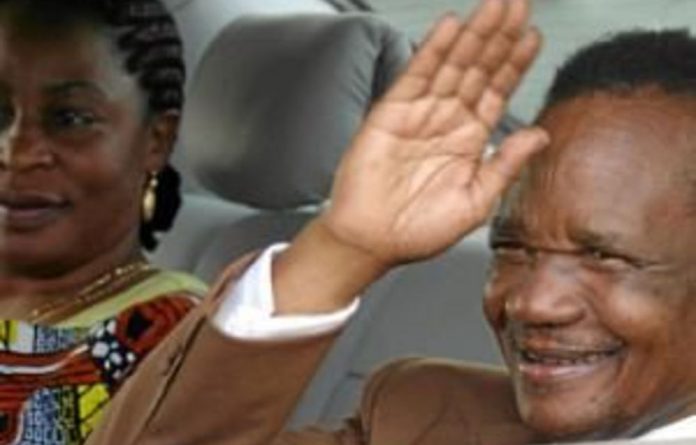 Frederick Chiluba, who has died aged 68 after a heart attack, was a trade unionist who became the president of Zambia in the country’s first multiparty election. His decade in office was notable for high-profile corruption scandals, marriages to two of Zambia’s most prominent politicians and a noticeable taste for high-heeled shoes. He was 1.5m tall.

Kenneth Kaunda, Zambia’s president since independence in 1964, had made it a one-party state in 1972. It was the stalwart ally of all Southern Africa’s liberation movements and its capital, Lusaka, was home to the headquarters of the exiled ANC.

Bombing, incursions and destabilisation from then-Rhodesia (Zimbabwe) and South Africa did much to ruin the economy.

After the dismantling of apartheid began in 1990, Western governments were keen to see new leaders in power, especially in countries where opposition to apartheid South Africa had been the key policy of the old leaders.

So when Chiluba formed a new party, the Movement for Multiparty Democracy, it was openly backed by the United States under President George Bush, with the promise that aid to Zambia would be resumed if Kaunda was defeated. In 1991, Chiluba stunned Africa by winning the presidency and set in train a liberalisation of the economy that took him a long way from his trade-union roots.

The privatisation of the copper mines was ill-managed and the introduction of a free-market economy left three-quarters of the population as poor as ever. Between Kaunda and Chiluba, bad feelings were intense and personal.

Kaunda left State House with no home to go to and it took a private Commonwealth intervention to persuade Chiluba that the former head of state must be given somewhere to live. Kaunda had famously referred to Chiluba as the “4ft dwarf”, though this was nothing compared with the comments of other Zambian politicians, who openly mocked not only his size, but also his personal extravagance and alleged corruption.

In 1997, Chiluba imprisoned Kaunda for allegedly conspiring in a coup plot against him.

Chiluba released him only after pressure from Africa’s elder statesmen, and Kaunda’s peers: Nelson Mandela and Julius Nyerere. He also tried to strip Kaunda of his citizenship and even attempted to deport the former president on the grounds that he was actually from Malawi.

He then amended the constitution to stop citizens with foreign parentage from standing for president, aimed at disqualifying Kaunda, whose father came from Zaire, from any attempt to return to politics.

Chiluba won a second term in 1996 and then attempted, unsuccessfully, to change the Constitution to allow himself to run for a third term. The initiative found no support in Parliament, and in 2002, he was succeeded by his vice-president, Levy Mwanawasa.

Chiluba was born in the city of Kitwe, in the Copper Belt, which was of central importance to Zambia’s economy. He was expelled from secondary school for political activities, worked as a sisal cutter, a bus driver, a city councillor and an accounts assistant, before becoming a trade union leader. He became prominent as chairman of the Zambia Congress of Trade Unions when, in 1981, with several other leaders, he was detained by Kaunda for calling a wildcat strike that paralysed most of the economy.

Ten years later, with the end of the Cold War, which had been a key factor in Africa’s history, multiparty politics became the fashion for the continent.

After his departure from the presidency, another serious falling out at the top of Zambian politics occurred and Chiluba was indicted on 100 charges of corruption for siphoning public money into private bank accounts in London.

He had by then divorced his wife of 33 years, Vera, a politician, as was his new third wife, Regina. She, too, was charged with corruption.

Chiluba was barred from leaving the country after his two co-defendants fled abroad. His trial dragged on for six years until after Mwanawasa’s death in 2008, when the presidency passed to Chiluba’s close friend Rupiah Banda. Chiluba was acquitted the following year.

Another corruption case had been heard in Britain, and in May 2007 Chiluba was found guilty of stealing $46-million in a civil case brought by the Zambian attorney general concerning shares and property bought in Britain.

High court judge Peter Smith accused Chiluba of shamelessly defrauding his people and flaunting his wealth with an expensive wardrobe of “stupendous proportions”.

It was in connection with this case that it was revealed that a Swiss shop had supplied him with more than 100 pairs of size six shoes with two-inch heels, many monogrammed. Chiluba continued to plead his innocence and refused to recognise the verdict of Smith, whom he accused of having been bribed by his successor’s government.

Chiluba was a born-again Christian. Immediately after he was acquitted of corruption in Zambia and was able to travel again, he returned to the controversial Synagogue, Church of All Nations, in Lagos, Nigeria, almost a decade after his first visit while president.

After sitting through a 10-hour service, which included the deliverance and rehabilitation of several armed robbers, as well as a thanksgiving service for the recently concluded Fifa Under-17 World Cup, Chiluba was full of praise to God for the church’s leader, Prophet TB Joshua, and its Emmanuel television channel.

Chiluba ascribed what he called Zambia’s successes under his leadership to his having declared it a Christian country. Regina and his 11 children survive him. —