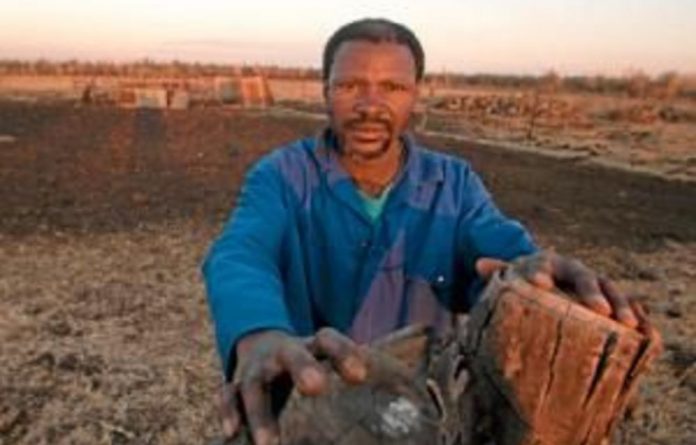 You turn off a narrow tar road on to an axle-rattling dirt road to get to the windswept community of Goedgevonden. Nestled in the lazily rolling hills near Ventersdorp in North West, the community has battled for its rights but got little in return.

Residents have waited for 14 years for their land claim to be settled. “We’re under control of the government. We don’t own the land,” says Johannes Modukanela as he points to the fertile soil under his feet. The community members are frustrated, he says, because the democracy they embraced in 1994 has failed them.

Constance Mogale, director of the Land Access Movement, says residents have been granted “user rights” to the land, whereas the state has retained legal ownership. She adds that full transfer has been hampered by “overlapping rights claims” — other communities have also made demands on the land.

Another complication has been the arrival of new settlers, who were not among those originally evicted in 1978 and therefore excluded from the claim. Confusion in the rural development and land affairs department seems to be a further hurdle; the commissioner of restitution of land rights, Tumi Seboka, recently resigned.

The Mail & Guardian phoned six officials working at the department. They either passed the buck or said they could not talk to the media.

On a freezing morning in 1991 Afrikaner Weerstandsbeweging leader Eugene Terre’Blanche and two dozen horsemen charged down the streets of Goedgevonden. Their goal: to force the community off the land. Houses were smashed and the police had to form a cordon around the village to prevent further violence.

For residents it was just another day in their battle to stay on their ancestral land. In 1978 they had been forcibly removed and scattered around the province. Thirteen years later, with apartheid land laws relaxing, they moved back and, in 1997, lodged a claim on three farms totalling 1 800 hectares.

But after 14 years of waiting the community is falling apart. Most of the young people now live and work in urban centres elsewhere. The money they send home is helping, but 80% of the remaining community members live on social grants.

Before the 1978 removals, annual harvests at Goedgevonden were enough to feed the whole community, which even owned tractors. But now the land lies fallow and changing weather patterns are wreaking havoc with the traditional planting cycles.

Attempts to start afresh have failed; Modukanela says there is such a disconnect between the land and community members that their hearts are not in it. It all boils down to ownership — residents agree that it is hard to pour energy and scarce finances into something that is not theirs.

Their one move to gain a steady income appears to have been torpedoed by government.

“We went to the same people who forcibly removed us and leased the land to them. Our life got better because we got food from that,” says Daniel Soya, chair of Goedgevonden’s land and development committee. But the local ­government, as the land owner, cancelled the contracts and told the community to be self-reliant. “Now we have nothing.”

Under Nelson Mandela’s presidency the community thought it had received a R4-million presidential grant, with which it wanted to buy tractors to start farming. But then the community members were told the money was a Land Bank loan that would have to be repaid, says Mogale.

They refused to repay it because they did not ask for it, and the tractors bought with the initial instalments were repossessed. The community then took the dispute to the public protector but has heard nothing since.

With a loan default and without collateral or tenure, the banks are now refusing to talk to them. The government has helped in some ways, by installing a community hall, a walled graveyard and electric boreholes. But these will only count when the community owns the land, Soya insists.

Walking through the grazing fields, the community members’ vote is unanimous: they want their claim settled so that they can secure funds to buy equipment to work the land.

Farming in harsh climes
The government’s foot-dragging with their land claim is not the only obstacle facing Goedgevonden community members. In the past decade, environmental changes have been so rapid that they have left residents feeling bewildered, says Land Access Movement director Constance Mogale.

The treasurer of the community’s land and development committee, Christina Mbenze, agrees. “Rain used to fall in summer. But now you even get rain in winter. In 2009 you could feel the sun getting much warmer in summer; now it burns.”

Even with winter rains the local dam, which used to be full all year round, is drying up. Water supply to the electric boreholes is erratic and two have run dry.

Sitting in their community hall, the locals remember how things used to be. “I can see a lot of climate changes,” says committee chair Daniel Soya.

In the past a line of blue-gum trees stopped the strong winds, but then Eskom cut them down to make way for power lines.

In 2000 the winds grew stronger and, with no windbreak, became ferocious. They now bring “very windy rains” as well as lightning in winter, says Johannes Modukanela. The community’s small cattle herd has been dying as a result.

The community members are deeply worried by the variability in weather patterns. They say that even if they had agricultural equipment, it would be hard to plan their farming activities.