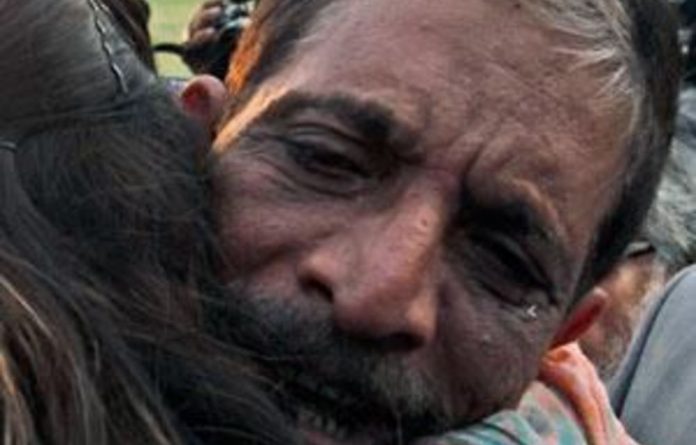 Indian sailors on Friday recounted the horrors they faced during their 10-month captivity by Somali pirates who kept them in chains, often without food or water, and treated them “like animals”.

The six sailors, freed after the payment of a $2.1-million ransom, also thanked Pakistan’s government for its role in their release during an emotional reunion with family members at New Delhi airport.

Pakistan worked with Egypt to free the Egyptian-registered cargo ship Suez which was hijacked in August 2010 with the six Indians, four Pakistanis, 11 Egyptians and a Sri Lankan on board.

“We were in darkness, we were starving,” said NK Sharma, the captain of the ship. “We got just two meals a day. Sometimes we got water and sometimes not even that.

“There were moments when we lost all hope. Whatever Pakistan has done is praiseworthy. They came forward to our help and did not care about nationalities.”

Karachi stopover
Pakistan also sent two ships to help bring the men home, dropping them at Karachi on Thursday before their flight to India.

Pakistani human rights activist Ansar Burney has also been praised for his role in negotiations with the pirates and for helping to raise the ransom.

Another Indian sailor, Prashant Chauhan, said he was thrilled to be free after an ordeal in which the captives were routinely beaten and poorly fed.

“We were chained and treated like animals,” Chauhan said. “They gave us just boiled rice to eat and sometimes we also got some spaghetti. It was worse than hell. They would drink and beat us with whatever they got hold of.

“Pakistan government has done a lot for us. Their ship Babar came to our rescue. We called up Indian ship Godavari a number of times but they never responded.”

Grateful India
India’s Foreign Minister SM Krishna said the government was relieved at their release and thanked Pakistan for its help.

“We are relieved that their ordeal has ended,” he said in a statement. “We appreciate the timely help extended to them and sailors of other countries by the Pakistani navy.”

“Let us not forget that the ordeal of over five hundred sailors from across the world, who are still in captivity of the pirates, is not yet over,” he said.

Piracy has surged in recent years off Somalia, a lawless, war-torn country that sits alongside one of the world’s most important shipping routes.

Indian Ocean
It has also spread across the Indian Ocean towards India, as pirates seek to evade the clutches of an international maritime patrol in the area.

Five Pakistani sailors were rescued by the Indian navy in March after their vessel was attacked off the coast of Kerala, in southern India, late last year.

They have been housed at a police station in Mumbai since, awaiting clearance to return home. Their Iranian, Thai, Bangladeshi, Filipino and Turkish colleagues left India soon after the rescue.

“An assistant commissioner from the Pakistan High Commission [in New Delhi] visited the police station today [Friday] and interacted with the five sailors from his country,” Inspector MG Tope told the Press Trust of India.

The news agency quoted an unnamed police source as saying that the Pakistanis were likely to be able to leave next week. — AFP