That’s Dr Oprah Winfrey to you 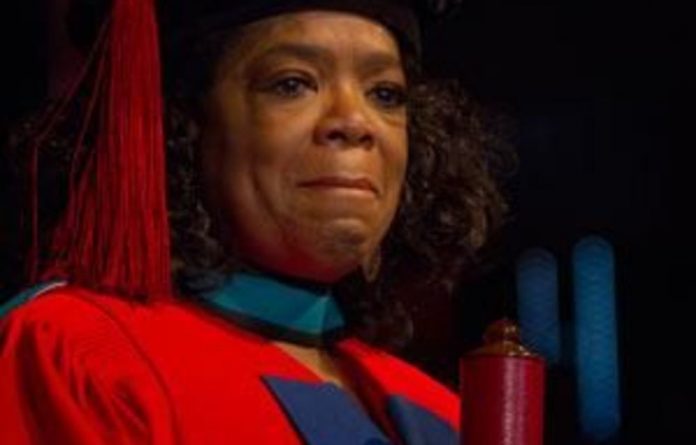 The second great American O to grace the country’s shores this week was honoured by the University of the Free State in Bloemfontein on Friday afternoon in a graduation ceremony that awarded Oprah Winfrey an honorary doctorate in education.

The 57-year old first lady of talk had tears streaming down her face as the university’s chancellor Khotso Mokhele conveyed the degree, and jokingly dubbed her the Queen of Tears as she was overcome with emotion.

Winfrey told the crowd of about 4 500 people who gathered to hear her speak that it was a newspaper column by university’s Vice Chancellor Jonathan Jansen that started the whole thing.

On a recent visit to South Africa do some work on her school, the Oprah Winfrey Leadership Academy for Girls, the talk show host had picked up the Sunday Times.

“I was reading a really thoughtfully profound article about not accepting mediocrity by Jonathan Jansen and I was so stimulated by what he was saying,” she said.

So she called John Samuel, the former chief executive of the Oprah Winfrey Academy for Girls and the university’s current head of their International Institute for Studies in Race, Reconciliation and Social Justice, and asked him to pass along a message.

The chat with Jansen evolved from a little talk to a small class at the school into an honorary degree in education and a big chat with a whole lot of people.

It was Samuel who ran down Winfrey’s list of accomplishments before the degree was handed over, including her 25 years with the Oprah Winfrey Show, which recently came to an end, the recent launch of the Oprah Winfrey Network as well as her extensive philanthropic work in the country.

“In her words and deeds, you have truly become a South African,” he said, dubbing her a Kovsie – the nickname for the university’s students.

During her hour long inspiring talk she spoke about her own background growing up in rural Mississippi and her rise to the top of international media, as well as issues around forgiveness and the Reitz Four incident that, she said, was one of the things that drew her to the university.

“I really believe what has happened here comes under category of amazing,” she said.