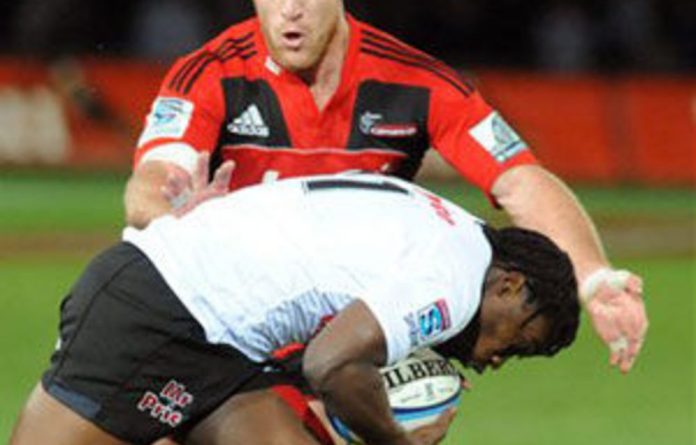 The Canterbury Crusaders continued their season-long odyssey by overwhelming a spirited but ill-disciplined Sharks side 36-8 in Nelson on Saturday to reach the Super Rugby semi-finals for the 10th successive season.

Tries from centre Sonny Bill Williams, captain Kieran Read and prop Ben Franks as well as 19 points from the boot of Dan Carter proved more than enough to overhaul an early Sharks lead and set up a last four clash with the Stormers.

The seven-times champion Crusaders, condemned to playing all their matches on the road this season after February’s deadly earthquake in Christchurch, now face an 11 000 km trip to Cape Town.

Their victory also sends the Auckland Blues, 26-13 winners over the New South Wales Waratahs in their first round playoff on Friday, to Brisbane to meet the Queensland Reds in next Saturday’s other semi.

“It took a bit of time, we knew that was going to be the case but the guys just stuck to it,” Read said in a televised pitchside interview.

“It’s just part of this journey these boys have created this season and we want to do well over there [in South Africa] and hopefully get another win under our belts.”

The Durban-based Sharks, who had great success counter-rucking at the breakdown in the first half, will rue their high penalty count and the number of times they turned over the ball.

Having stunned the double defending champion Bulls 26-23 in their final regular season match last weekend, they had been hoping to inflict a first ever ‘home’ defeat on the Crusaders in Super rugby playoffs.

Giving away a kickable penalty in the opening seconds of the contest was not the ideal start but after 10 minutes they had the lead when Willem Alberts forced himself over the line for an early try.

A brilliant 40-metre line break from scrumhalf Charl McLeod got the ball to within a couple of metres of the Crusaders try line and No. 8 Alberts burrowed through the defence from close range.

It took another 20 minutes until the Trafalgar Park crowd saw the kind of attacking play the Crusaders have built their success on, and even then Zac Guildford spilled the ball to end the move.

Two minutes later, winger Sean Maitland’s hard running made something of a far less promising move and he offloaded the ball in the tackle to allow Williams to score.

Carter converted and added his second penalty to give his side a 13-5 lead at halftime but it was a burst of 13 points in 10 minutes soon after the break that won the match.

Two penalties from Carter sandwiched an interception try from No. 8 Read and when Franks forced himself over the line for the third try two minutes from time the match was over as a contest.

“We would have liked to have gone on further but we came up against a championship team tonight,” said Sharks captain Stefan Terblanche.

“For a team to come together the whole season, not to play one home game all season, well, the Sharks wish them all the very best.” — Reuters