NZ zoo takes in penguin that mistook sand for snow 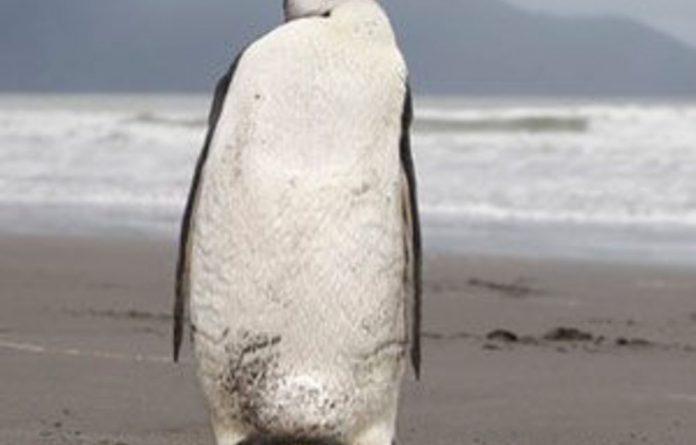 This is one homesick penguin, stranded on a New Zealand beach 3 218km from Antarctica and eating sand it mistook for snow.

Wildlife officials stepped in Friday and moved the ailing young bird to a zoo. On Saturday it was on an intravenous drip and recovering from two medical procedures designed to flush sand from its throat and stomach.

The emperor penguin appeared healthy when it was first spotted last Monday on picturesque Peka Peka Beach on New Zealand’s North Island – the country’s first sighting of the species in the wild in 44 years.

But it grew more lethargic as the week passed, falling weakly into the wet sand at times, and officials feared it would die if they didn’t intervene.

“It’s not going to survive here on the beach if we left it here,” said Peter Simpson, a program manager for New Zealand’s Department of Conservation. “There’s too much public pressure. It’s just out in the open.”

The penguin had been eating occasional twigs of driftwood and lots of sand, which experts said it likely thought was the snow it normally consumes for hydration in Antarctica. Temperatures hovered around 50 degrees, far higher than the subfreezing temperatures it’s used to.

Wellington Zoo staff said the bird was dehydrated and suffering from heat exhaustion.

“Today it was not moving very much and, perhaps as a consequence of eating the sand … it certainly has lost condition,” said John Cockram, a penguin expert from Massey University, on Friday as the decision was made to intervene.

Not happy
Zoo vet science manager Lisa Argilla said the bird’s throat was flushed with water to try to clear the debris, but it still seemed blocked, so it underwent a more extensive stomach flush Saturday.

However, that still didn’t clear out all the sand, so a third procedure is planned Monday. It remained on an intravenous drip Saturday to combat dehydration.

For the 65-kilometer journey to the zoo, the 32-inch (81-centimeter) penguin was lifted into a tub of ice and then onto the back of a truck. The weakened bird did not need to be sedated for the ride.

The tallest and largest species of penguin, the emperors’ amazing journey to breeding grounds deep in the Antarctic was chronicled in the 2005 documentary March of the Penguins, which highlighted their ability to survive — and breed — despite the region’s brutal winter.

Estimated to be about 10 months old, the penguin probably was born during the last Antarctic winter and may have been searching for squid and krill when it got lost. Experts haven’t yet determined whether it is male or female.

“He’s a young bird that’s out swimming and foraging and doing what he’s supposed to do. He just made a wrong turn someplace,” said Lauren DuBois, assistant curator of birds at SeaWorld in San Diego, which has the only colony of emperor penguins in North America. Thirty birds live there in a -4-degree Celsius habitat that simulates Antarctica, with up to 2 270kg of snow blown in every day.

About six months after hatching, DuBois said, a young emperor will head out to sea and spend up to four years in the water without coming back to the rookery.

“The birds will travel quite far,” she said, noting it is not unusual for them to be in the water near New Zealand. “What is unusual for this penguin is that he’s come ashore and he’s causing quite a stir,” she said.

“Anything above 0 Celsius and they will start getting stressed,” she said.

The bird’s future is uncertain. New Zealand has no zoo equipped for the long-term care of emperor penguins, which can grow up to 122cm high and weigh up to 34kg. DuBois said SeaWorld would be ready to step in and help if asked.

Ideally, the penguin will heal enough to eventually be released into the wild. But returning it to Antarctica isn’t feasible, at least for now. There’s no transportation to the continent in the harsh winter.

There’s also concern about infection. The penguin may have caught a disease by swimming through warmer climes, and wildlife officials would not want to be responsible for introducing illness into the insulated Antarctic penguin colony, Simpson said.

Often, sick birds require rehabilitation for a month or two before being released, Wellington Zoo spokesperson Kate Baker said, adding that some creatures with severe injuries remain in captivity.

The rare venture north captured the public imagination, with school groups, sightseers and news crews coming to the beach to see the penguin and photograph it from a distance.

Christine Wilton, who discovered the penguin on Monday while walking her dog, was back at the beach Friday to say goodbye.

“I’m so pleased it’s going to be looked after,” she said. “He needed to get off the beach. He did stand up this morning, but you could tell that he wasn’t happy.” — Sapa-AP