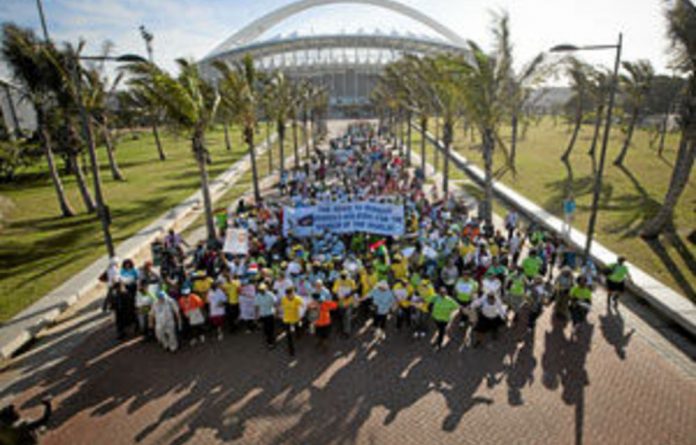 Up to 3.6-million maternal and child deaths could be avoided each year in 58 developing countries if midwifery services are upgraded, according to a new report released by the United Nations Population Fund and partners.

In South Africa the mortality rate of children under the age of five is also high, with 104 children dying for every 1?000 births. The millennium target is to have 20 or less under-five deaths for every 1?000 children born. In most cases these deaths and illnesses could be prevented.

A proficient, motivated and supported midwifery workforce is vital to ­tackle this high death rate, according to the first “State of the World’s Midwifery” report launched this week in Durban at the 29th International Confederation of Midwives Congress.

“Millenium development goal number five, which focuses on improving maternal health, is ­probably the one with the least ­progress. Public health advisors and practitioners are not relying on the key health professional who can improve maternal mortality — the midwife,” said Vincent Fauveau, maternal health advisor for the ­population fund and co-ordinator of the report.

The quality of midwifery care in South Africa needs strengthening, particularly in remote areas where additional support is needed, the report stated.

“The biggest challenge for midwives in South Africa is that there are not enough of us. Because people are first trained as nurses and then given midwifery skills, midwifery is not prioritised. We need our own independent regulatory council for midwives instead of falling under the nursing council,” said Deliwe Nyathikazi, midwife and president of the Society of Midwives of South Africa, at a march of more than 2?000 midwives held before the start of the congress in solidarity with midwives across the world.

The call of the march was that “more midwives are needed now than ever to save mothers and their babies”. “We will not give up until the health and welfare of mothers and babies has been improved and the status of midwives has been enhanced,” said Nyathikazi.

One midwife who works in the public sector stated that the greatest challenge was the lack of the correct equipment, such as cardiotocography (CTG) machines to monitor the heart rate of a foetus. “When a baby is in foetal distress and you do not have a CTG machine, the quality of care cannot be ensured,” said a department of health midwife who wished to remain anonymous.

There is also a shortage of staff, too few skilled personnel and a lack of support from management in South Africa and other parts of Southern Africa. “It is not unusual to find only one midwife managing 200 women in one facility. We must prioritise investment in midwives to deliver life-saving care in the communities where mothers are needlessly lost,” said Lennie Kamwendo, a midwife and chair of the White Ribbon Alliance for Safe Motherhood in Malawi.

A research study analysing factors influencing access to maternal care in South Africa found that although the state provides free healthcare for pregnant women, there is still a problem of access because of the cost of transport and of bringing goods such as nappies and sanitary towels to the facility when giving birth. “Women do not have funds to get to the health facility, so they die at home,” said Loveday Penn-Kekana, lead researcher of the study from the Centre for Health Policy at the University of Witwatersrand.

The study found that there were often problems with the treatment of women in maternity services in some South African health facilities where women gave birth alone, were not offered pain medication and given no support. But the successful experience of maternity-led midwife units in the Western Cape, where only three maternal deaths occurred from 2005 to 2007, shows a cost-effective option for the country.

The Peninsula Maternal and Neonatal Service has seven midwife obstetric units that saw 17?606 women in 2009 alone. These units espouse the belief that a tertiary-level hospital focused on the needs of ill patients is not the most appropriate setting for a normal low-risk pregnancy and is an inappropriate use of expensive resources and infrastructure.