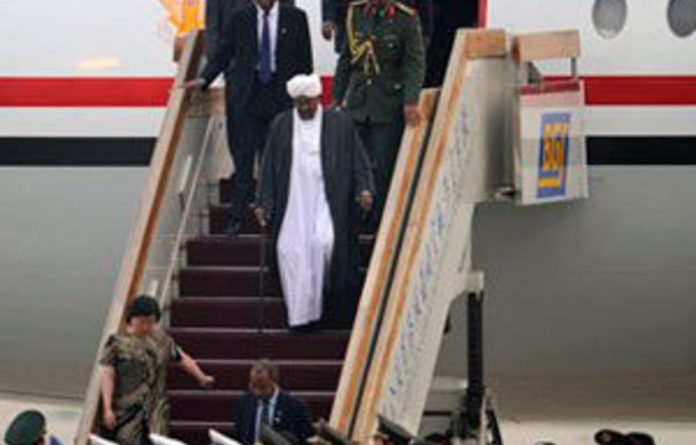 Omar al-Bashir, wanted for war crimes, arrived in Beijing early on Tuesday, according to an Agence France-Presse photographer, a day after the Sudanese leader was originally due in China to meet President Hu Jintao.

He had been scheduled to arrive early Monday but Chinese foreign ministry staff said his plane was “delayed”, prompting the cancellation of planned meetings, including with Hu.

The Sudanese foreign ministry said al-Bashir, who had been attending a counter-terrorism summit in Tehran, had to reroute his trip and had flown back to Iran.

Al-Bashir was due to stay in China — a key supporter of the regime in Khartoum — until Thursday, although it was unclear whether the delay would now prolong his visit.

The ICC has issued arrest warrants for al-Bashir for genocide, crimes against humanity and war crimes in Sudan’s western Darfur region, where about 300 000 people have died since 2003.

He is the first sitting head of state to be targeted by an ICC warrant.

ICC statutes dictate that any member country should arrest al-Bashir if he visits. China is not a party to those statutes.

Al-Bashir cancelled plans to attend a summit earlier this month in Malaysia, which declared this year that it intends to recognise the ICC’s jurisdiction to show its commitment to fight crimes against humanity.

China is a key supporter of the regime and a major military supplier to the regime in Khartoum and the biggest buyer of the country’s oil, although the majority of Sudan’s oil fields are located in the south, which will become independent next month.

“In recent years President al-Bashir has made many visits to other countries and was warmly welcomed,” foreign ministry spokesperson Hong Lei told reporters.

“It’s quite reasonable for China to invite the head of a state that has diplomatic ties with China to come for a visit.”

New York-based Human Rights Watch said al-Bashir’s visit to China was “an affront to victims of heinous crimes committed in Darfur” and urged Beijing to withdraw its invitation — or arrest al-Bashir when he arrived.

Al-Bashir was also slated to hold talks with other top Chinese officials.

Topics on the agenda were likely to include possible fresh aid to Sudan and problems in Abyei, a disputed border area claimed by al-Bashir’s Khartoum-based northern Sudan regime and the rival government in the south.

Khartoum government troops occupied Abyei on May 21 and tens of thousands of people have since fled to the south.

The north and south reached an accord last Monday under which border areas will be demilitarised. — AFP