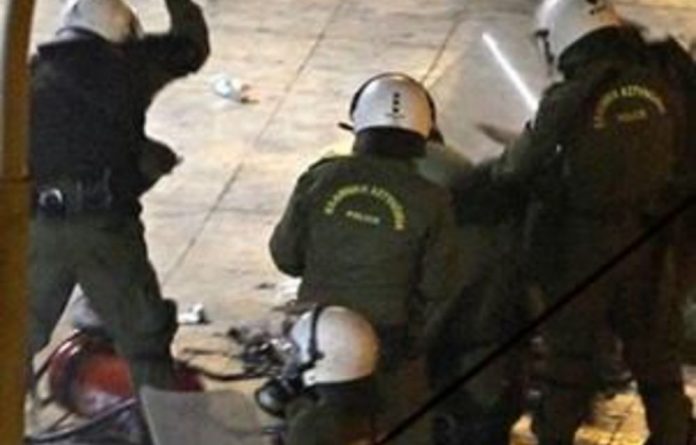 Greek riot police with teargas and batons fought hooded youths near Parliament on Tuesday as violence broke out at a rally against anti-austerity measures international lenders have demanded from the Athens government.

With Greece on the edge of bankruptcy, Parliament is due to vote this week on a package of spending cuts, tax increases and privatisations agreed as part of a massive bailout aimed at averting the eurozone’s first default.

In a boost to embattled Prime Minister George Papandreou, one of three deputies from his ruling Socialist party who had suggested they would oppose the bill said on Tuesday he had decided instead to support it.

“I have made the decision to vote for the plan because national interests are more important than our own dignity,” Thomas Robopoulos told Reuters.

Labour unions launched a 48-hour strike to protest the measures and more than 5 000 police were deployed to the centre of the capital to deal with the protests, with most attention focused on Syntagma Square in front of the Parliament.

The rally was initially peaceful but by early afternoon hundreds of youths, many wearing gasmasks and scarves covering their faces, hurled masonry chipped off buildings in the square at riot police who responded with tear gas.

Officials said more than 20 police officers were injured by flying stones. One person was stabbed during fights between rival groups of young demonstrators, eight others were injured and dozens were treated for breathing troubles.

Eighteen people were detained and five were formally placed under arrest, police said.

Violence continued throughout the afternoon and protesters set fire to two communications vans with mobile telecoms transmitters, which they had apparently mistaken for TV trucks and sprayed with slogans attacking the media and banks.

As a crowd initially estimated at more than 20 000 thinned out, clouds of white smoke swirled above the square and police with shields and riot helmets stood by, occasionally launching charges to disperse a harder core of mainly young demonstrators.

After night fell, thousands of peaceful demonstrators returned to Syntagma to chant insults at Parliament, as they have done every night for over a month. A large group listened to a concert in the centre of the square while in the side streets small gangs of black-hooded youths hurled rocks at police, who responded sporadically with tear gas.

Transport, schools and other public services as well as many private businesses were shut as a result of the strike called by ADEDY, the union representing half a million civil servants, and GSEE, which represents two million private sector workers.

Earlier, protesters had marched through the capital shouting slogans, banging drums and carrying banners attacking the terms of the bailout which many Greeks feel imposes harsh penalties on ordinary pensioners and workers while sparing the rich.

“The measures are for the good of the banks not for the good of workers,” said Yannis Tsounis (38) a municipal worker. “Europe must not see us as pariahs. We are beginning to feel as not being a part of Europe.”

Deep in debt
Greece is in the grip of its worst recession since the 1970s, with youth unemployment at more than 40% and public finances shattered by a debt equivalent to 150% of annual economic output.

Deep in deficit and unable to borrow on financial markets, it depends on international support to keep going. A default would spread contagion around the 17-nation single currency area and cause a deep shock to the global economy.

Finance Minister Evangelos Venizelos called on lawmakers to back the measures in two votes on Wednesday and Thursday, saying it was vital to convince Greece’s creditors that it had a plan and that the austerity measures could be implemented.

“The government is running out of time and so is the opposition,” he told Parliament. “We are handling our country’s history right now and nobody can play with that.”

The European Union’s top economic official, Olli Rehn, issued a stark warning to Greek lawmakers that if they did not vote for the measures, the result would be immediate default.

Voting on the first Bill is due after a debate that is due to begin at 10am (7am GMT) on Wednesday. Parliamentary officials said the timing of the vote itself was still unclear but it would probably come during the afternoon.

The conservative opposition has refused to back the plan but the governing socialists have a majority, with 155 deputies in the 300-seat house, to approve the measure.

The about turn by Robopoulos made it more likely parliament will pass the law, with a handful of conservatives also expected to back it.

“This policy is wrong, it has exhausted the Greek people and Greek society,” conservative New Democracy leader Antonis Samaras told Parliament. “If we perpetuate this mistaken policy we will only make things worse, both for Greece and for Europe.”

Greek banking shares shrugged off the street violence, rising by 4.9% and pulling up the general index by 2.7%, on optimism the mid-term plan would pass and European bank talks on the rollover of Greek debt would succeed.

More hurdles ahead
More serious problems may lie ahead however when the government has to implement the programme, which will slash public sector jobs, shut down state-owned companies and attempt to take on endemic tax evasion.

Eurozone authorities are working flat-out with banks and insurers to devise a scheme under which private bondholders can share the burden of further funding for Greece without prompting credit ratings agencies to declare a selective default.

The austerity plan has caused deep anger among Greeks disillusioned with years of political corruption and inefficiency and now bitterly resentful of the tough conditions imposed by the European Union and International Monetary Fund.

“They cut our pay by 25% and a lot of people in my department have not been paid for two months,” said 52 year-old civil servant Yannis Zaharopoulos.

“We have gotten to the point where families cannot make it. We are financially and psychologically wrecked.” – Reuters