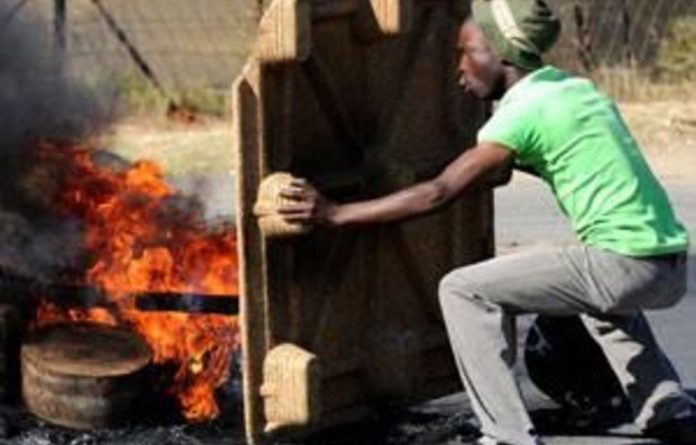 It’s early morning in Zandspruit and police are barricading one end of the road. At the other end, behind a blockade of trees, rocks and burning tyres, a mob of young and old emerge, singing struggle songs. The protest started at 3am and will not stop until their councillor addresses them.

“You see what we have to do to get the government to listen to us?” says Johannes Melley, as pointing to the rubbish and big rocks on the road.

It’s been two months since South African local government elections, and the community is fuming that no one has come to address them since. As they march they carry posters that are calling for councillor Maureen Schneeman to step down.

“Zuma said we should vote for the ANC and he will build us proper houses and electricity, but we haven’t heard anything from our councillor,” says Mpho Phansi.

Phansi has been living in Zandspruit since 1994 and been waiting for an RDP house all that time. He shows us his one-room shack where he lives with his family. In the same yard, he shares a toilet with about six families.

Back on the street, you can still see flames and smoke coming from burning of tyres and tree trunks. For many, Schneeman was not the preferred candidate; they wanted Steven Nhlapho, but don’t know what happened.

“Maureen lives in Sundowner, she doesn’t know life in a shack. We want her out,” says one of the teenagers.

It seems like the young people are the driving force of the protest. With all their energy and anger, they will not listen to any negotiations with the community committee.

One member of the Zandspruit committee comes to calm the crowd down by asking if they could have a formal meeting. A young man from the crowd says: “We are tired of meetings.”

Demonstrator Zanele Magwaza complains that she has been attending community meetings all her life, and they are often useless because nothing changes.

Apart from wanting Schneeman to step down, one of the burning issues that has spurred this episode is the construction of a taxi rank just down the road. “How can they start building a taxi rank, when people live in shacks?” she asks.

“I have been living here since I was born,” says Phillimon Kokong, “My mom has been waiting for an RDP house all her life. When are we going to stop living like monkeys?”

He picks up his loud hailer and goes to address the group.

For Kokong and his fellow residents, the protests will continue until they see the changes they want in Zandspruit.