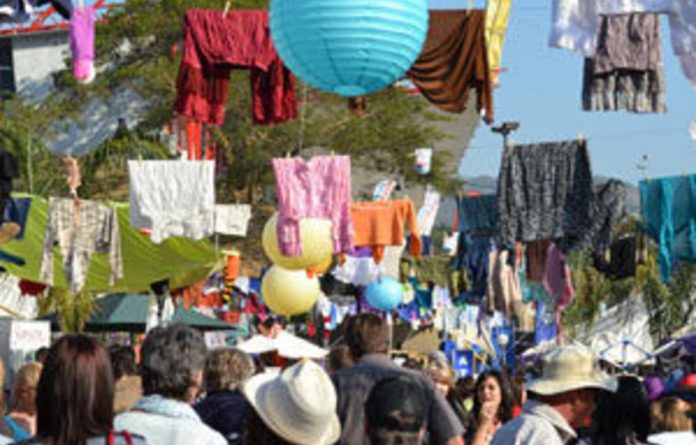 As the weekend began, the third day of Innibos 2011 in Nelspruit saw a doubling of the throng of people shoving to get into the festival.

Friday proved to be slightly colder than Thursday and so the search was on for warm food and drink. Only after wandering around the Bosmôl (Bush Mall) for the second time, did I discover a gem: the wine garden hidden in a corner and offering excellent views for some people watching (and good, cheap wine!).

The place to be, however, seemed to be the beer tent, where lesser-known artists performed covers of everything from Smokie to the Beatles — though after the umpteenth version of Hey Jude was forced upon listeners, it became clear that it was time to move on.

On Friday afternoon, Afrikaans legend oom Ollie Viljoen wowed the audience with his piano accordion in a performance with Valiant Swart. This duo’s performance of blues mixed with “boeretroos” seemed to match the winter sun’s mood.

Friday evening promised a stellar line-up, from Koos Kombuis, Kinky Robot and Fokofpolisiekar at the MK Kliphard stage to Theuns Jordaan on the Standard Bank main stage. Kurt Darren and Snotkop were also due to perform, but with any luck Friday night would offer up fewer artists singing with backing tracks on the main stage and more with real bands.

Theatre productions enjoyed greater support at this year’s festival than ever before. Despite only being five years old, the festival has acquired a reputation for staging only a few productions — but all of them of the highest quality.

One production in particular — ‘n Seder val in Waterkloof (A Cedar falls in Waterkloof) — was sold out before the festival started, and an extra performance was added for Sunday.

Another show that drew festivalgoers was Chris Chameleon’s Noot vir Brood — a tale of making money out of making Afrikaans music — and combines Chameleon’s story-telling ability with the Boo! frontman’s incredible singing voice.

Innibos2011 runs until July 2 in Nelspruit.

NGO threatens to take state to court over lax standards

Meanwhile, back in the bush