Gathering around The Table 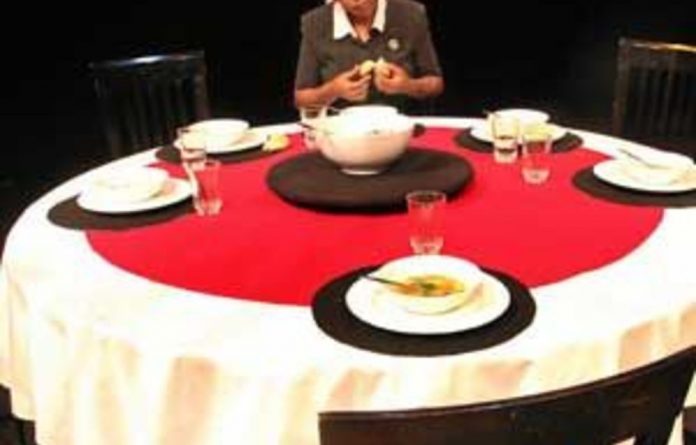 For better or for worse we are all involved in a story of drama and dysfunction, of happy occasions, treasured traditions and the gamut of unhealthy patterns. This story? family life.

And the nexus this life occurs at the dinner table, where relations convene to reaffirm their bond or to recall why they grew up and left home. The Table, a Sylvaine Strike directed production, captures all the melodrama and begrudging sentiment of family life as it unfolds around a meal. Don’t underestimate all that can happen before dessert.

With elements of physical theatre and modern dance, this piece combines Strike’s characteristic touch of magic with the realism of writer and dramaturge Craig Higginson (Girl in the Yellow Dress, Dream of the Dog). In the opening scene, a gypsy-dressed woman steps into the spot light and circles a piece of wood while butterflies dance around her and Yiddish music plays. Screaming sirens interrupt the score and we are transported somewhere else — Eastern Europe during WWII.

Then ushered into another reality: the home of a Jewish South Africa family — as typical and unconventional as they come. It has been a year since the death of the family patriarch and a mother prepares for her children’s homecoming and for the ceremonious unveiling of their father’s tombstone.

The mother, Sarah, and Flora, the housekeeper, set the table while the nervous and disheveled youngest son, Levi, chooses his pants and readies himself with curious anxiety for the family reunion. The first to arrive home is the coughing and sniveling and heavily saddled, eldest son, Daniel, who declares: “I’m in mortal agony”. He soon reveals that his girl friend has kicked him out.

Airy and salubrious
Next comes Ruth, the flamboyant and fleshy but good-humoured overeating sister. Once together, the three siblings enact a rambunctious childhood game that leaves them rolling on the floor. But when the enthusiasm settles, in walks the voluptuous Amo, Flora’s stylish and successful daughter who has been studying in America for the past year.

Now the dinner ceremony can begin. Everyone resumes a familiar role as the two sons put on their yarmulkas and Ma unwraps the kitka bread. The wine goblet is passed and the family, including Amo, seem to be wrapped in an airy and salubrious feeling that cannot last. Flora stands on the periphery. Along with each course comes greater honesty and insight into the hidden anguishes of each character. Everyone harbours a secret pain. Love, jealousy, infidelity, and remorse emerge and this family will never be the same after dinner.

There is no doubt that scenes from The Table will hit home. When Ma tells well-meaning eldest son to “fix himself” instead of her beloved table, one can’t help but feel the blow of brutal honesty. “We’re fine for ten minutes and then it descends into chaos,” says truth-telling Ruth, and the audience’s collective deja vu was palpable.

But for all it’s complications and conundrums, we see what it means to have a family and this play reminds us why we continue gather around the table — and at the theatre for that matter.

Napo Masheane draws on the Women’s March of 1956 to add depth to her play about politics in present-day South Africa.
Read more
Friday

Theatre director Greg Karvellas talks about the play that tells a story of remembrance and legacy.
Read more
Friday

A love affair with Can Themba

A young playwright tells how the Sophiatown-era writer provided the inspiration for a new play.
Read more
Friday

Theatre going in the right direction

Reports of the death of stagecraft are exaggerated, says Brent Meersman. He turns the footlights on SA's playmakers who are getting it right.
Read more
Advertising