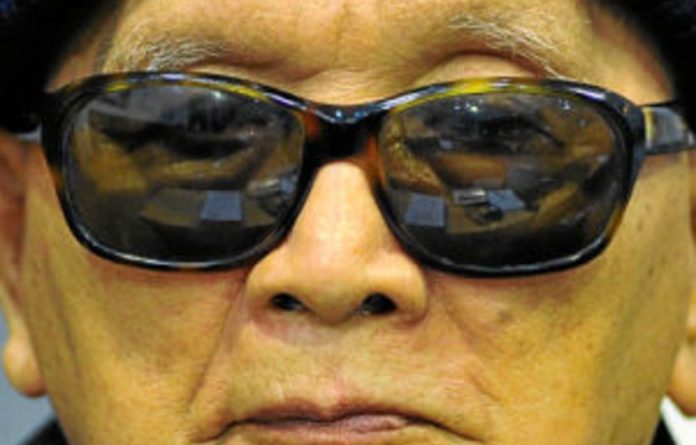 A United Nations-backed tribunal began hearings this week into the cases of four Khmer Rouge leaders accused of genocide and crimes against humanity from 1975 to 1979 after toppling a pro-United States regime at the end of the Vietnam War. The procedural battles in the landmark trial underline the tribunal’s complex makeup.

As many as one-fourth of Cambodia’s population died from execution, famine, torture and overwork under the Khmer Rouge, which tried to build a classless agrarian utopia sealed off from foreign influence. The group was driven from power by invading Vietnamese forces and fought a guerrilla war that lasted into the 1990s before it collapsed.

All four of the accused deny the accusations and some have challenged the court’s jurisdiction, setting the stage for a lengthy and complex trial. Using witnesses and written evidence, prosecutors will try to show a chain of command between the leadership and the mass killings and other abuses carried out in its name. The indictment cites the deliberate targeting of ethnic minorities as evidence of genocide. Other charges include war crimes, torture and religious persecution.

The Khmer Rouge tribunal was set up in 2005 to provide accountability and justice to a nation that has struggled to come to terms with its violent past. Until now, it has prosecuted only a prison-camp director who was sentenced last year to 19 years in jail. However, the current batch of accused may be the last to be tried, as investigating judges appear unwilling to take on further cases.

Legal experts say pressure from Prime Minister Hun Sen, who wants to limit the tribunal’s scope, as well as fatigue among some foreign donors, have weighed on the court. In a preview of the legal battle ahead, a lawyer for Nuon Chea, the regime’s second in command, accused the court on Monday of bowing to political pressure. The lawyer cited the tribunal’s failure to take on other cases as a sign of such interference.

“The sole purpose of the judicial investigation was to collect evidence against our client and ignore the evidence that would put [him] — in a positive light,” said Nuon’s lawyer, Michael Pestman.

Hundreds of Cambodians packed the public gallery to watch the pre-trial sparring between legal teams. Substantive hearings and testimony from witnesses are expected to start by September, though the trial could run for years, raising doubts about the longevity of the aging cadres, some of whom are said to be in poor health.

The presiding judge said on Monday that the accused who weren’t fit to appear in court could watch the hearings on television in their nearby prison. Nuon, who wore dark glasses and a black ski hat, later left the courtroom in an apparent fit of pique after speaking briefly of his unhappiness with the legal process.

Theary Seng, an activist who has helped victims’ groups file civil suits in the tribunal, said she welcomed the trial and was hopeful that it would shed light on the secretive regime. But she expressed frustration about the judge’s leniency toward Nuon. “We just lost the most visible symbol of justice: his face,” when he walked out, she said.

The other suspects are Ieng Sary, the regime’s head of state, his wife, Ieng Thirith, a senior minister, and Khieu Samphan, the foreign minister. Pol Pot, the regime’s Paris-educated leader, died in a remote jungle camp in 1998.

The judges can hand down a maximum penalty of life in prison as Cambodia doesn’t have the death penalty. Many Cambodians criticised the 19-year jail term for Kaing Guek Eav, the prison-camp director, which is currently under appeal, as being too soft. —

Angkors, away from the crowd