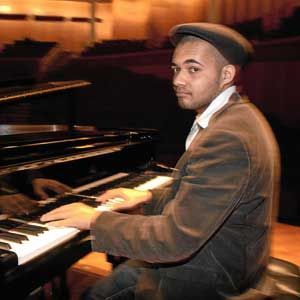 At just 25, jazz pianist and composer Bokani Dyer has seen his music take him to Sweden, Norway and the United States, win the 2011 Standard Bank Young Artists Award and dabble with house-music hits.

His is a strong, individual sound and an emblem of the rise of a new wave of contemporary South Africa jazz voices.

Dyer’s debut album, Mirrors, was presented in a hand-stitched cloth cover — a hint at the attention and craftsmanship lavished on its musical content. In the first track, Prelude, a bold stanza of solo piano introspection segues into an accomplished melody used to introduce some of Dyer’s fellow young Cape lions: Lwanda Gogwana (trumpet), Sisonke Xonti (tenor saxophone), Chris Engel (alto saxophone) and Helder Gonzago (bass). Elsewhere on the album are Shane Cooper (double bass), Angelo Syster (guitar) and Orlando Venereque (saxophones). Audiences and critics would agree that Dyer’s art is evidence of a new, young contemporary jazz scene developing on the southern tip of Africa.

He has just completed a new album and sent it for mastering. Hopefully, there will be copies for sale at the National Arts Festival.

“What’s different in this one?” I ask him over a cappuccino at the trendily offbeat Hello Sailor in Observatory’s Lower Main Road.

“That’s tough,” he says. “But the new album is more coherent. On Mirrors, I tried to do a lot of different things, I was using different people and it was recorded during three different periods over three years.

“This time, there is one sound with one band and material from one period — as well as with me understanding what I really want the music to say.”

A winning streak
This sense of self-prepossession — and keyboard talent — helped Dyer to win the 2011 Standard Bank Young Artist Award that allowed him the time for the new recording and also saw him as runner-up in the 2009 Southern African Music Rights Organisation (Samro) piano contest.

“I’ve been lucky to have had a good streak,” he says. “I used the prize money from the Samro [Southern African Music Rights Organisation] award to go to New York and attend masterclasses at the Manhattan School of Music.”
His eyes almost mist over as he recounts lessons with firebrand pianist and MacArthur recipient Jason Moran.

“It’s completely different studying there — so very modern but still understanding the tradition. The curriculum is designed for steady growth and monitoring that growth. It’s also really easy to get jazz jam sessions with other musicians. That should be made easier at places here, like the University of Cape Town’s College of Music. There are also just such great teachers there — I sat in on a lecture by Dave Liebman. It was four hours long. He’s part of jazz history, he played with Sonny Rollins and Miles Davis, and there he is, telling you stories and telling you about playing and how to play.”

It is not only from academies that Dyer draws his inspiration. He also recently completed a debut album for Plan Be, his soul-groove project with vocalist Sakhile Moleshe (the voice behind many a banging hit by Goldfish).

Dyer cites living next door to Tagore’s in Observatory’s Trill Road as a major musical influence: “I spend so much time there just listening to people play and watching what they do. It’s small but it has the best musicians in town, and visiting ones too. Things like that, for the jazz nights as well as when DJ Ntone [Ntone Edjabe, founder of the literary collective Chimurenga] spins his African mixes, and the online radio that happens every year when the Pan African Space Station comes around.

“That’s what people should be listening to, to be exposed to a lot of interesting music. If you don’t listen to it, if you don’t go out and find it, then you won’t know what’s going on in music.”