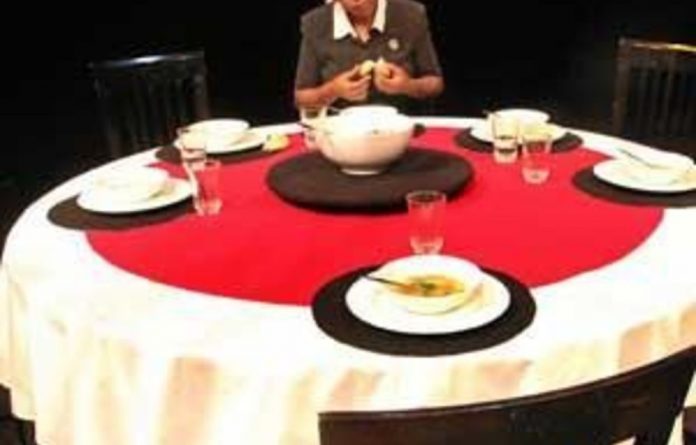 On Monday I watched and enjoyed a word run of The Table, a play conceived by Sylvaine Strike, which will premiere on Friday at the National Arts Festival in Grahamstown.

The table is a metaphor on which the play pivots to explore notions of the family and truth, and the encroachment of both immediate and distant history on the present.

Afterwards, I spoke to Strike, who directs the play, and the writer, Craig Higginson, who also worked on the production’s dramaturgy.

For Strike, the play’s overriding motif is how important truth and love are to a family facing challenges. She says that the only way to overcome these is through truth and love.

There is, I think, a barely perceptible nod at the Truth and Reconciliation Commission, one of the country’s foundational pillars.

A Jewish matriarch, Sara (played by Annabel Linder), her sons, Daniel and Levi (Brian Webber and William Harding), and her daughter, Ruth (Karin van der Laag), are seated at a table on a Friday to remember the deceased patriarch. Also sitting at the family table (which is something of an institution) is the family’s domestic worker, Flora (Janet Hampton Carpede), and her daughter, Amo (Khabonina Qubeka).

Radical definition of the South African family
Amo has just returned from the United States where she has been studying to find a besotted and unstable Levi who likes his drink.

As the family eats and talks, simmering family tensions — sibling rivalries, secrets that have been locked up in unimaginably dark family vaults — burst on to the surface. If we look closely at the rather sad and startling drama, we see a radical definition of the South African family.

Some of the questions posed by the play centre on the domestic worker, who has served the white family for decades — how close is she to the family? Is she even family? Her children, do they have a stake and say in the family?

Higginson says that the history and trajectory of the domestic worker and the white family “are inseparable — what we often make the other is part of ourselves”.

The play gestures at notions of the family that are broader and much more exciting than the restricted definitions of the geneticist.

Higginson says that what they were trying to do with the play was to move away from a South African predilection to be “overt about political messages”. The result is that the play leads you along what you think is familiar racial territory — you are nodding and anticipating the usual race signposts — before the director turns the plot and the momentum of the play along a radically different path. The upshot is an entertaining production that also explores the country’s favourite topics — race and family, labour and history.

Napo Masheane draws on the Women’s March of 1956 to add depth to her play about politics in present-day South Africa.
Read more
Advertising