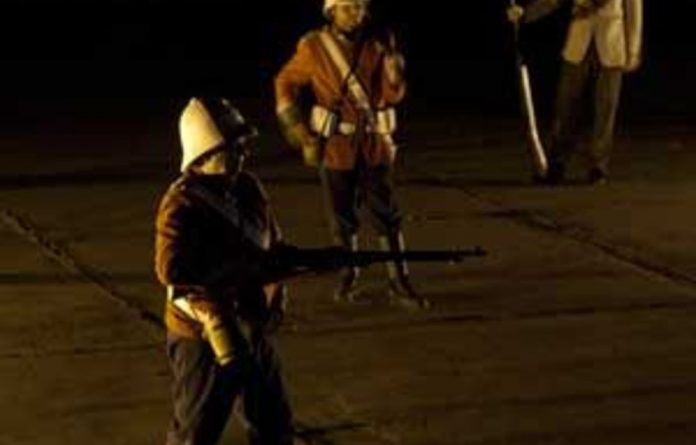 Abnormal Loads is a production written and directed by Neil Coppen, this year’s recipient of the Standard Bank Young Artist Award for Drama.

In the programme notes he writes that “[Abnormal Loads] … is a story I have been researching and imagining for several years, yet owing to its epic scale” he felt the idea would never come to the
stage. It’s possible one of the reasons why the play would have remained just an idea is because of its breadth in terms of ideas, time — it covers over two centuries — and the way it moves across genres.

The production opens as main character Vincent Bashford Liversage (played by Mothusi Makano) is listening to audio isiZulu lessons. Vincent, who lives with his querulous and overbearing grandmother Moira Bashford Liversage (played by Alison Cassels), is not well; he has a headache that doesn’t go away. He has gone for several HIV tests — he is clean, yet he feels ill.

The family’s domestic worker suggests that it could have something to do with his anonymous father and suggests the herb mpepu which allows him to look into the past.

The play is set in Bashfield, nothern KwaZulu-Natal, represented by an elongated, curved stage, where the family’s history is reenacted.

Mixed blood
It’s family history in bold letters: there’s conquest, imperialism and miscegenation. A subtext to all of this is the life and fate of a mixed-blood man, immersed in white culture and yet trying to make sense of the black blood that courses through him. Yet the grandmother won’t allow it, blocking all access points to his paternal heritage.

While the production is riveting piece of work, ambitious in scope and execution, I felt that at certain moments in the play there’s rather too much narration and too little acting. That aside, Coppen is an interesting and daring director.

Napo Masheane draws on the Women’s March of 1956 to add depth to her play about politics in present-day South Africa.
Read more
Advertising