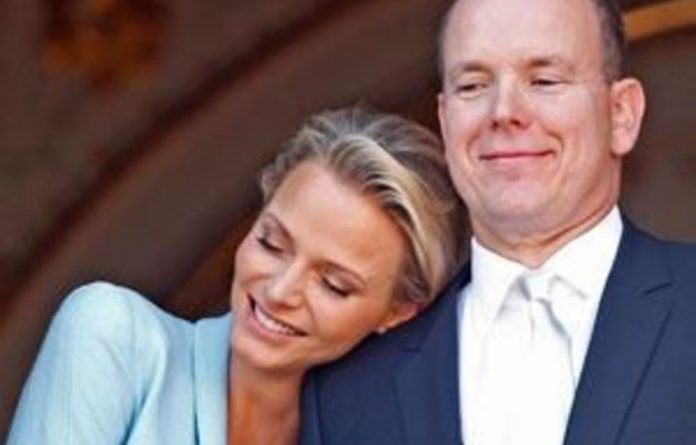 The 53-year-old married Wittstock (33) in the courtyard of his palace at the foot of a marble double staircase lined with white flowers.

The long-awaited nuptials are the first of a ruling prince in Monaco since the prince’s father, Prince Rainier III, married the Hollywood star Grace Kelly in 1956, and comes two months after Britain’s wedding of Prince William to Kate Middleton.

Albert winked at his bride, who smiled shyly, as they sat on red velvet chairs holding hands, while the voice of SA singer Pumela Matshikiza filled the courtyard with the traditional Click Song.

Gathered to witness the event was a who’s-who of Europe’s royal families: Albert, King of Belgium, Princess Madeleine of Sweden and Felipe and Letizia of Spain among others.

Another 3 500 attendees sat outside to watch the festivities on giant TV screens.

The couple married in a civil ceremony in the palace throne room on Friday.

The wedding puts a spotlight on the tiny principality built around images of luxury and its ancient House of Grimaldi whose family members have ruled since 1297.

One royal fan travelled from The Netherlands to cheer and thousands of well-wishers are expected to flood the city state surrounded on three sides by France.

“We have followed the whole history, the life of the principality of Monaco,” said Meina Meyes. “We really feel like part of the family because we know everything about them.”

Home to the Monte Carlo Grand Prix, Monaco is still considered a playground of the very rich: residents pay no income or property tax, and yachts crowd the port.

But tragedy and scandal, including admissions from Albert that he fathered two illegitimate children, have chipped away at its mystique over the years.

Just days ago, rumours of discontent threatened to mar the festivities. The palace strongly denied a report in French weekly L’Express that Wittstock tried to skip town on a one-way flight to South Africa and that it took “infinite persuasion” by the prince and his entourage to change her mind.

The son of Prince Rainier and Kelly — who as Princess Grace ushered in an era of glamour to the tiny city-state and who died in a car crash in 1982 — Albert met Wittstock while presiding over a swimming race in 2000.

Wittstock, whose champagne blonde hair and sculpted figure draws comparisons with Kelly, is a former national champion swimmer from Benoni outside Johannesburg. She stopped competing in 2007.

The culmination of months of painstaking preparations, the event has generated building excitement in the 8 000 Monegasques who hold citizenship from the world’s smallest independent state after the Vatican City.

Feast of fish and vegetables
Renowned French chef Alain Ducasse prepared what he described as a “finely-crafted festive menu” of local seafood and vegetables for the wedding banquet.

The couple hosted 800 honoured guests for a meal that sought to flatter the prince’s reputation as an environmentalist. The meal was described as a “sincere, appropriate cuisine that pays tribute to a rich and generous land”.

The tiny principality is almost entirely built over with 1970s concrete apartment blocks, gaudy casinos and luxury hotels, but Ducasse ransacked kitchen gardens and nearby waters for ingredients.

The first course was a Monaco family favourite, traditionally eaten with the fingers, “barbagiuan”. Served warm in a fabric presentation box, it is a stew of vegetables, egg, sheeps milk and cheese served under rissoles.

The guests then enjoyed a dish of marinated golden mullet served on an oval dish of tomatoes, olives and tender vegetables known as Potargue or Bottargo.

Carbohydrate came in the form of small spelt, an ancestor of wheat still grown in the Provencal highlands looming behind the principality, and cooked with carrots, onion, celery and mushrooms.

Local fish were served in a delicate bouillon over new potatoes in saffron broth and wraped in “sunshine-covered spice” from the same hills.

Milk from the local Rocagel district had been transformed into creamy ice cream and served with strawberry jelly and wild red fruits.

The wedding cake was redcurrant and vanilla, and many of the wines were from South Africa. – Reuters, AFP