Numsa throws down the steel gauntlet 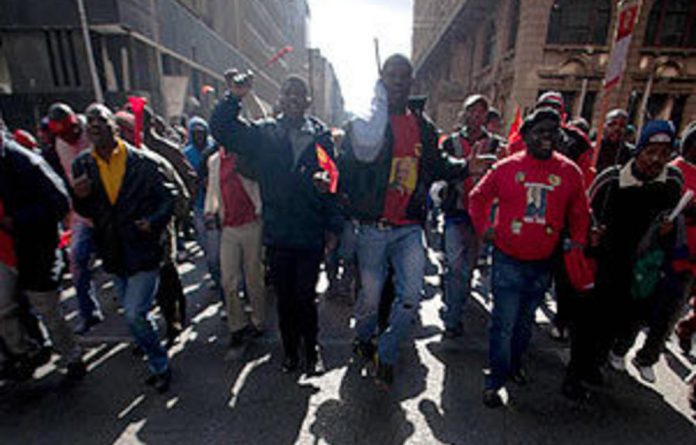 The National Union of Metalworkers of South Africa (Numsa) officially embarked on strike action on Monday, following a breakdown in negotiations at the end of June, saying it would not budge on its demands for a 13% across-the-board hike, better working conditions and a ban on labour brokers.

“Seifsa [the Steel and Engineering Industries Federation of South Africa] must be prepared for a long strike; they mustn’t think this is going to be over in three or four days, we are going to protest until our demands are met — this is non-negotiable,” Irvin Jim, the general secretary of Numsa, told protesting workers on Monday in central Johannesburg, where the union handed over its memorandum of demands to Seifsa.

The strike action is under way around the country, with similar marches organised by Numsa occurring in Cape Town and Durban. About 170 000 workers are expected to take part nationwide.

Numsa, which represents about 120 000 workers, is being joined by five other trade unions, jointly representing at least another 50 000 workers.

According to the Seifsa website, it had received strike notifications from the Chemical Energy Paper Printing Wood and Allied Workers’ Union (Ceppwawu), and the Metal and Electrical Workers’ Union (Mewusa).

“We all have the same common demands,” he said.

The Metal and Engineering Industries Bargaining Council (MEIBC) on Monday said that while wage negotiations were reaching the “power play stage”, it was confident an agreement would be reached.

“The council has urged all employers to follow the industry-accepted principle of ‘no work, no pay, no discipline’ in the event of protected industrial action.”

The MEIBC said it had received notices of intended lock-out action from Seifsa.

The strike started on Monday after the Labour Court’s weekend dismissal of an application for an interdict to stop the strike, brought by the Plastic Converters’ Association.

In its raft of demands, Numsa is calling for an across-the-board 13% wage increase for all workers from July 1 for two years, and better general working conditions.

Poverty endures
“Employers must open their big ears — working people continue to suffer from poverty, even though the South African economy has apparently recovered from the recession,” said Jim.

The call for improved working conditions encompassed equal opportunities for all workers; compulsory medical aid and testing for illness, to be paid for by employers; and better notification of changes in technology that might affect employment.

A wage increase of 20% was originally demanded by the union, but during negotiations the figure was brought down to 13%.

Numsa has warned employers in the sector that if their demands are not met within three days, they will return to calling for the original 20% wage increase tabled when negotiations began.

Sectors of the economy expected to be affected include construction and automotive industries, as well as engineering firms.

A living wage
The general consensus among workers taking part in the industrial action is that they are exploited by an industry that contributes millions to the South African economy each year.

In the past financial year, the construction and manufacturing sector, which are seen as the main proponents of the steel industry, contributed 18.3% to the overall gross domestic product of the South African economy.

Steel sector wages vary depending on the skill levels in each job, but the average wage for unskilled to semi-skilled workers in the steel sector ranges from R18 to R30 an hour.

“I don’t have enough money to support my kids. After deductions I take home R3200 — how am I supposed to live?” asked Dorothy Ntsaluba, a quality inspector at a steel manufacturing company.

“They treat us like dogs, we work to make them millions and we live on nothing,” echoed Cassius Khumalo, a driver.

Along with demands for wages and better working conditions, Numsa has added its voice to the call for the complete banning of labour brokers.

Labour pains
Calls for labour brokerages to be banned have increased since the beginning of the Zuma administration, with the Congress of South African Trade Unions (Cosatu) the main proponent of the demand.

“Labour brokers must pack their bags and leave. Jobs in all sectors must be divided among the workforce and not be given to businesses to make money,” Jim said.

This was echoed by Cosatu general secretary Zwelinzima Vavi, who was addressing protesters as the memorandum was handed over.

Cosatu estimates that over a third of South Africa’s labour force is employed on contract, with a great number getting their jobs through employment agencies and labour brokerages.

This is, however, at odds with statistics supplied by AdCorp, South Africa’s biggest labour broker.

AdCorp says that of South Africa’s 13-million strong workforce, 3.9-million are working on contract and 900 000 are directly employed by employment agencies and labour brokerages, comprising only 7% of the entire workforce.

Vavi added that this fight will be taken to Parliament to ensure labour brokering is made illegal by year’s end.

“They are nothing but enslavers — they won’t last. It’s going to be a long winter — Amagwala ayesaba [“The cowards are running away” in Zulu],” Vavi said. — Additional reporting by Sapa