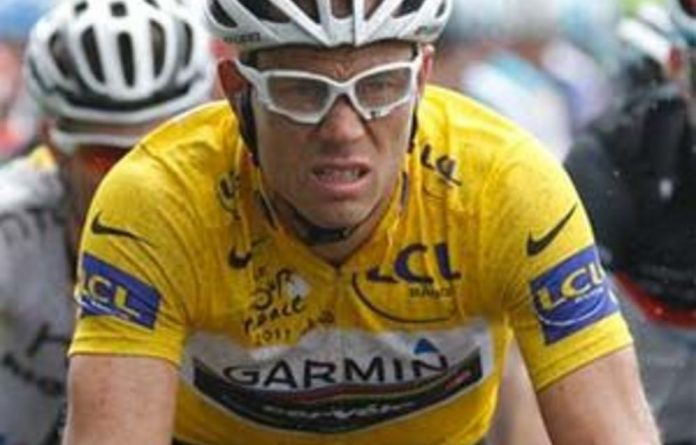 Thor Hushovd surely deserves his “God of Thunder” nickname. When there is a battle to be won, Hushovd is always up for the fight.

Looking set to lose the overall lead at the Tour de France during the steep final climb to the finish line in Tuesday’s fourth stage, the powerfully built Norwegian sprinter produced a tremendous effort to return to the lead group and retain the coveted yellow jersey.

After a day of suffering mostly spent under the rain, Hushovd leads by one second over stage winner Cadel Evans after excelling in the 2km final climb that featured some sections with a 15% gradient.

“It was painful and I cracked up a bit in the climb — I was over my limit,” said Hushovd, who became leader after his Garmin-Cervelo team won last week’s time trial. “But then I thought about the yellow jersey and I gave it all I got. I’m proud of what I did.”

Hushovd didn’t take part in the intermediate sprint during the 172.5-km stage in the race for the green jersey for the top sprinter as he knew the climb to Mur de Bretagne was always going to be testing.

“My only goal today was to keep this jersey,” said Hushovd, the reigning world champion. “And considering my abilities, I think I had a very good climb.”

Hushovd has won stages at all the big three races — Tour de France, Giro d’Italia and Vuelta — but he was left behind when defending champion Alberto Contador first attacked.

The Norwegian, however, wouldn’t give up and crossed the line in sixth position to be awarded the same time as Evans and Contador, who finished second.

“About two or three years ago, I realised that I could not compete anymore on flat sprints with a guy like Mark Cavendish,” Hushovd said. “So I started to focus on a different type of sprints. To be a strong on small climbs, you need specific preparation and specific work.”

Garmin-Cervelo manager Jonathan Vaughters was full of praise for his 33-year-old rider.

With the next three stages expected to be only moderately difficult, Hushovd believes he can keep the jersey until the race reaches the Massif Central mountains on Saturday.

“It looks like everyone wants the jersey,” Hushovd said. “But I won’t let it go and the team will try to keep it as long as possible.” — Sapa-AP