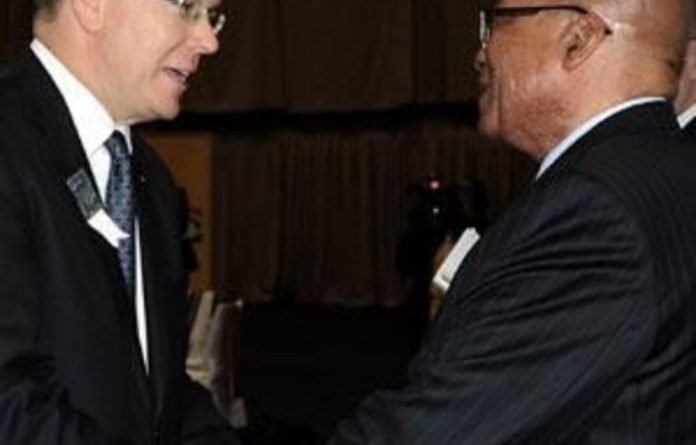 It’s a venue fit for a prince and princess: a five-star hotel famous for its sweeping views of the Indian Ocean and a presidential suite that lists for R50 000 a night.

The Oyster Box, one of South Africa’s most lavish hotels, will host a reception for Prince Albert II of Monaco and his new bride, Charlene Wittstock, as they visit Durban this week.

The royal newlyweds, who are in town for a meeting of the International Olympic Committee (IOC) — of which Albert is a member — will be throwing a party at the seaside hotel for 400 guests on Thursday night.

The hotel, which opened in 1947, is famous as one of Africa’s most opulent destinations.

It has hosted princes William and Harry, supermodel Naomi Campbell and Chelsea owner Roman Abramovich, among other celebrities.

Located in Umhlanga, just north of Durban, it prides itself on its “colonial charm”, a historic lighthouse and oyster beds just offshore that supply the hotel’s renowned Oyster Bar.

Joanne Hayes, chief of public relations for the hotel, said it’s an obvious choice for an event like the royal reception.

‘No other choice’
“We’re thrilled. It’s a great honour. But as far as we’re concerned, when you see the Oyster Box, there is no other choice really,” she told Agence France-Presse.

The Oyster Box was built in 1869 and originally served as a navigational beacon before being converted to a hotel.

It recently underwent a two-year renovation, reopening in 2009. The new owners, the Red Carnation luxury hotel group, sought to blend new furnishings and technology with the original decor of the 1940s and 50s, when the hotel was in its heyday.

Today the hotel has 86 “individually appointed” rooms and suites, including eight garden villas, each with their own plunge pool.

The crown jewel is the 450-square-metre presidential suite — a two-level room with a private lift, with a private swimming pool, private study and marble his-and-hers bathrooms.

South African media have reported that the couple are staying in the suite, but the hotel is tightlipped about its guests.

It also has an all-white ballroom adorned with crystal Venetian chandeliers, an infinity pool overlooking the Indian Ocean and a 24-seat movie theatre that can be booked for private screenings with dinner and popcorn.

The royal reception is expected to spill into the various venues of the hotel, which will be reserved exclusively for invitees that night.

The hotel is keeping details of the function under wraps, but Joseph says he is planning a menu that is “seasonal, with a South African touch”.

Police and security are expected to set up a cordon around the property.

“This is a private function,” said general manager Wayne Coetzer.

“We will do all we can to ensure that the couple and their guests are able to enjoy the renowned Oyster Box hospitality to the fullest.” – AFP