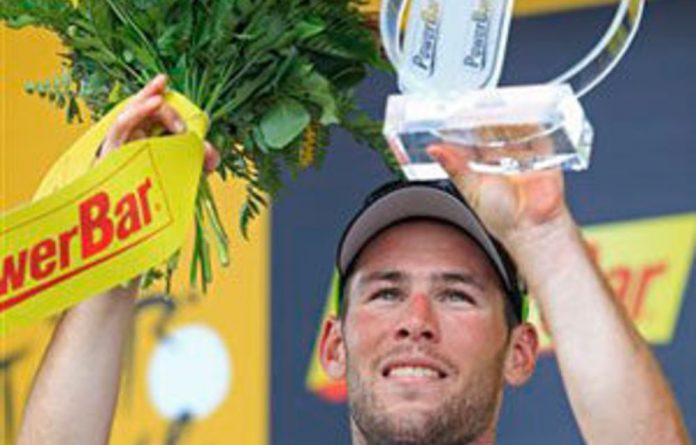 British speedster Mark Cavendish won a windy and crash-marred fifth stage of the Tour de France in a mass sprint on Wednesday, as Thor Hushovd of Norway kept the leader’s yellow jersey.

Defending champion Alberto Contador fell in a crash and RadioShack rider Janez Brajkovic quit the race after another spill during the 164.5-km trek from Carhaix to Cap Frehel on Wednesday.

Cavendish, one of the world’s best sprinters, collected his 16th career Tour stage victory and his first this year by speeding past Philippe Gilbert of Belgium — who finished second — and Jose Joaquin Rojas in third.

“I am really happy. It was a difficult finish,” said Cavendish, who rides with the HTC-Highroad team. “I put every thing into it … If we win, it’s not because we’re lucky, it’s because we’re good.”

The top standings didn’t change because the vast majority of riders crossed in a pack right behind the sprinters. Hushovd kept his one-second lead over Cadel Evans of Australia in second. Frank Schleck of Luxembourg is third overall, four seconds back.

Wednesday’s ride was mostly marked by crashes that brought down some of the biggest names in the pack, which shrank to 195 riders after two competitors dropped with injuries.

“It was very nervous, and because of that you get a lot of crashes, because there are 200 riders who want to be in front,” said Hushovd, who retained the jersey for a fourth straight day.

Contador went down briefly but returned — with a tear on the left shoulder of his Saxo Bank team jersey. Many riders were jostling to stay at the front, setting the stage for possible spills.

The Spanish three-time Tour champion was entangled in a crash about the 72km mark and took off his helmet briefly, then gave a thumbs-up to signal that he was all right.

The highest-profile withdrawal was RadioShack’s Janez Brajkovic after crashing about a kilometre later. The 27-year-old Slovenian was evacuated to a hospital in an ambulance, where doctors judged that he had suffered a mild concussion, the team said. A scan showed he was otherwise all right.

Teammate Levi Leipheimer of the United States was also involved in a crash but returned to the race. Nicki Sorensen, bumped into the motorcycle of a race photographer, and skidded along a roadside before returning.

Christophe Kern, the French time-trial champion, dropped out of the race after a crash. — Sapa-AP