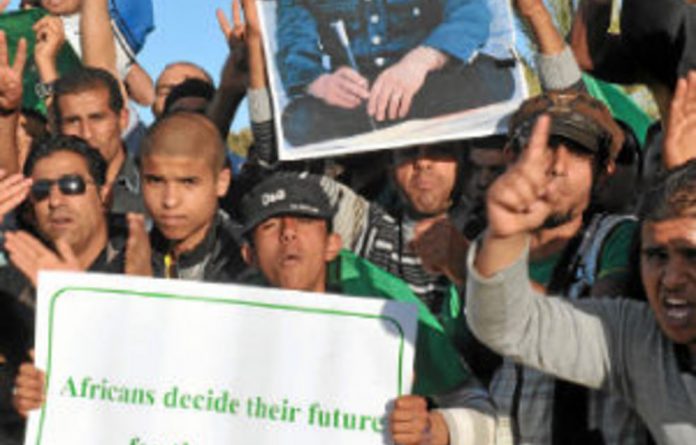 The South African government says it will not pre-empt negotiations on Libya and prescribe the future of Colonel Muammar Gaddafi — whether he should stay in Libya or seek asylum elsewhere, perhaps even in South Africa.

This is according to Mac Maharaj, newly appointed spokesperson for President Jacob Zuma and his international affairs envoy, who was responding to rumours that Gaddafi was seeking asylum in South Africa.

Zuma, as part of an African Union (AU) ad-hoc committee pushing for a peaceful resolution of the conflict, has called for Libya to begin negotiations urgently.

Zuma met his Russian counterpart, President Dmitry Medvedev, this week and they both emphasised the importance of starting negotiations and requested Nato to help persuade the rebel’s Transitional National Council to remove some of the preconditions that are making it difficult to begin talks.

Russia has also called for Nato to stop bombing Libya.

Maharaj said the AU’s proposals were the only ones on the table and included calls for a ceasefire and for the rebels and Libyan authorities to begin negotiations, even if Gaddafi was not involved in the discussions.

“A key objective is to get all the parties to talk because none of the issues that are being contested are matters that cannot be resolved,” Maharaj said.

Of Gaddafi’s future, Maharaj said: “It would be premature to start discussing such specific proposals because it would mean we are taking sides in the conflict. We cannot come from outside and propose solutions. The AU has proposals, but it is Libya that must decide what happens to Gaddafi.”

Asked whether the rebels were not likely to ignore a political solution when they appeared to be so close to a military victory, Maharaj said any side that ignored negotiations and clamoured for military victory would face the challenge of having to rule over a divided country.

Petrus de Kock, a senior researcher at the South African Institute of International Relations, said the ideal solution was a political one.

“The problem is the thinking in the rebel and Nato camps. The swing factor is to convince Nato and the rebels to support a ceasefire and the peace process.

“The rebels would probably hope for some major military advantage before they start negotiating. Nato seems as though it would rather go for the extreme regime-changing route, like in Iraq,” he said.

De Kock said the AU’s big worry was the arrest warrant for Gaddafi issued by the International Criminal Court in The Hague.

“It means that Gaddafi has no guarantees if he does step down. I don’t see asylum as a likely outcome because South Africa signed the Rome Convention [that obliges signatory countries to act on ICC arrest warrants]. If you look at the way the AU has been treated throughout and Zuma’s persistence, it’s important for Zuma to keep lobbying within the framework of the Security Council.

“I interpret Zuma’s move [to talk to Medvedev] as very positive. It keeps us at the forefront of issues that affect Africa. It means a lot of positive things for South Africa’s international image,” said De Kock.

President Zuma has been criticised on the home front because South Africa voted in favour of Resolution 1973, which authorised Nato military action in the United Nations security council.

This week International Relations and Co-operation Minister Maite Nkoana-Mashabane urged for the resolution to be implemented with maximum restraint.

“Our intention was never regime change, nor was it the targeting of individuals. When South Africa voted in favour of Resolution 1973 our intention was to ensure the protection of civilians and ensure unhindered access to humanitarian aid to those desperately in need of it.

“We had hoped this would create an enabling environment, within which the Libyans would negotiate a solution to the crisis that has befallen them,” said Nkoana-Mashabane.

Pressured Libyan rebels launch dual offensive
Libyan rebels have launched a two-pronged offensive against Muammar Gaddafi’s forces, striking from bases in the mountains southwest of Tripoli and from the besieged city of Misrata, 200km to the east.

Fighters from Misrata began their biggest offensive in six weeks aimed at breaking through the ring of government forces at Zlitan, on the road to the Libyan capital.

To the west, rebel forces surged out of mountain strongholds around the town of Zintan in pick-up trucks mounted with rocket launchers and anti-aircraft weapons. They seized a government base at the village of al-Qawalish, taking weapons and food abandoned by retreating troops.

Rebel authorities have refused to confirm whether the two offensives are linked. A Misratan commander, Hassan Duen, said on Wednesday: “Our forces are now 3km from Zlitan. We are pushing onwards.”

A source said a preliminary attack began on Tuesday, with rebel units concentrating on one side of the main Tripoli highway, gaining ground and supporting a second larger attack.
Gunfire and explosions from Grad rockets echoed every few seconds across Misrata from before dawn on Wednesday, mixing with the wail of ambulance sirens and Islamic chants being broadcast from its mosques. The blasts from incoming government rockets continued late into the afternoon. Misrata’s Hikma hospital reported 12 dead and 24 wounded by mid-afternoon.

A stream of ambulances arrived throughout the day. The death toll was expected to rise, adding to the 17 dead from two days of fighting around the city.

Crowds of fighters and anxious family members milled around the hospital grounds.

“Now it is too crowded. We have no beds,” said a senior doctor, Omar Harrous. Volunteers carried buckets of water and waited for the ambulances to leave before washing away blood on the tarmac.

The rebels are under growing pressure to produce results as the war approaches its fifth month. Reports from the frontline say rebel units have overrun government checkpoints and bases between Misrata and Zlitan.

But rebel forces face a difficult task to make a decisive breakthrough without sufficient firepower. They lack tanks and artillery and Nato is apparently unwilling to use its jets and attack helicopters in a co-ordinated air-support role.

Regular night-time gun battles are reported from Tripoli itself, with anti-Gaddafi guerrillas emerging after dark to ambush security forces.

“There are drive-by shootings at night here,” said one man in the Souk al-Juma district, an opposition stronghold. People are shooting at the police.”

In some neighbourhoods, gun battles rage every night, but the bodies of those killed and all other traces are swiftly removed.

With security tight and little sign of a major uprising in Tripoli, audacious guerrilla tactics appear to be the rebels’ best hope of chipping away at the Libyan leader’s defences.

In Souk al-Juma there have been reports of explosions, a raid on a police station and the violent suppression of a public protest.

Libyan government officials have denied the attacks and the movement of foreign journalists is strictly controlled, making it impossible to verify the claims. — Chris Stephen

The UN is currently going through a serious liquidity crisis because many countries have not paid their annual dues, and it is therefore unable to fulfil all its mandates
Read more
Friday

The lawyer, whose sense of justice stayed with him till his death, was an unassuming but essential part of South Africa’s ongoing struggle for equality – and he never forgot his roots.
Read more
Africa