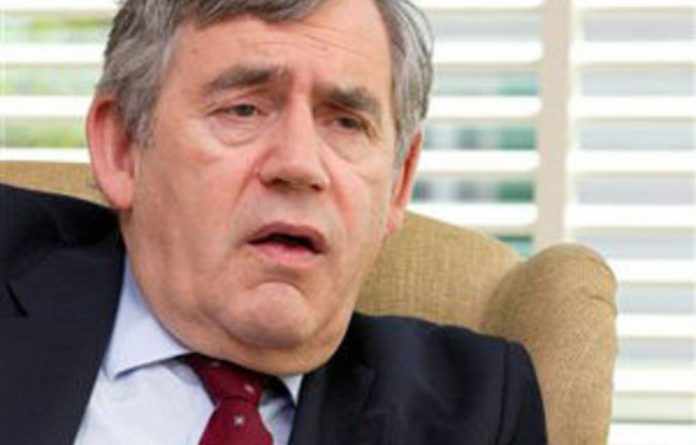 Allegations that former British prime minister Gordon Brown was a target of illegal data gathering by Rupert Murdoch’s newspapers piled pressure on the media baron as he tried to prevent investors pulling out of his News Corp empire.

Murdoch and the British government sought to draw the financial and political sting from a newspaper phone-hacking scandal by referring his $14-billion bid for the profitable pay-TV operator BSkyB to a lengthy commission inquiry.

By referring News Corp’s bid for the 61% of BSkyB it does not already own to the competition regulator, the British government hoped to shield it from a tide of outrage over allegations that reporters for Murdoch’s News of the World accessed the voicemails of murder and bomb victims and others.

News Corp shares nevertheless closed down about 7.58% at $15.48 in US trading on Monday, for a fall of almost 15% in four days, and the stream of allegations continued.

The Sun revealed in 2006 that Brown’s son Fraser had cystic fibrosis. Murdoch’s Times quoted a source at News International saying the story had been obtained from a “legitimate source”.

Police confirmed to Brown, who was finance minister and prime minister between 1997 and 2010, that his name had been on a list of targets compiled by Glenn Mulcaire, the private investigator at the centre of the voicemail hacking allegations against News Corp’s News of the World tabloid.

“The family has been shocked by the level of criminality and the unethical means by which personal details have been obtained,” Brown’s spokesperson said in a statement.

The New York Times reported that five senior British police investigators discovered that their cellphones also were targeted soon after Scotland Yard opened an initial criminal inquiry of phone hacking by News of the World in 2006.

The disclosure raised questions about whether the police officers had concerns about aggressively investigating the tabloid for fear that their own secrets would be divulged by the paper, the Times said.

“We are not providing a running commentary regarding the investigation,” a Metropolitan Police spokesperson in London said when asked to comment on the report.

US News Corp shareholders suing over the purchase of a business run by Murdoch’s daughter filed a revised complaint, saying the British phone hacking scandal reflected how the company’s board failed to do its job.

But several major shareholders told Reuters they continue to have confidence in the company and one major investor in the company said the share sell-off was overdone.

Donald Yacktman, chief investment officer of Yacktman Asset Management of Austin, Texas, the ninth-largest shareholder in News Corp, said the hacking furore “does slightly reduce the predictability of the cash flows, but the impact on the cash flows is minimal at best”.

Murdoch, who had already taken a shock decision last week to shut the News of the World, Britain’s biggest-selling Sunday paper, and has flown to Britain, had tried to seize the initiative again by withdrawing News Corp’s offer to spin off BSkyB’s Sky News channel.

The withdrawal of the offer, made to get the deal approved, opened the way for the government to refer the matter to the Competition Commission, whose investigation is likely to take a year or more.

“It’s a smart tactical move,” said Ian Whittaker, media analyst at Liberum Capital, noting that it also freed the government from a politically unacceptable but apparently unavoidable decision to approve the deal in the current climate.

“It gets the government off the hook. But there’s still a very strong chance that in the end it will not go through in the short term or medium term. There are enough players out there that are opposed,” he told Reuters.

Cameron under fire
Murdoch’s News Corp wields influence from Hollywood to Hong Kong and owns the US cable network Fox and the Wall Street Journal as well as the Sun, Britain’s biggest selling paper.

Conservative Prime Minister David Cameron has come under fire for his closeness to Murdoch’s media empire; he is a friend of Rebekah Brooks, the News International chief executive who was editor at the News of the World during much of the alleged hacking; and he chose another former News of the World editor, Andy Coulson, as his communications chief.

Coulson, who quit in January over the scandal, was arrested last week for questioning in connection with phone-hacking and allegations that his reporters illegally paid police for information.

Cameron has defended his choice of Coulson and noted that Brown’s Labour party also courted Murdoch when it was in power.

But on Monday he fired a warning shot at Murdoch, saying that News Corp needed to focus on “clearing up this mess” before thinking about the next corporate move.

The referral of the bid may ease the political pressure on Cameron as it meets a main demand of the opposition Labour Party, which had been threatening to drive a wedge into the coalition by forcing a vote in parliament on Wednesday.

Labour leader Ed Miliband said the government had moved reluctantly. “They are doing it not because they want to, but because they have been forced to,” he said, urging Murdoch to “drop the bid for BSkyB”.

Cameron’s deputy Nick Clegg, from his Liberal Democrat coalition partners, also urged Murdoch to reconsider the bid for the 61% of BSkyB that it does not already own.

Other allegations emerged on Monday that News of the World had bought contact details for the British royal family from a policeman and tried to buy private phone records of victims of the Sept. 11, 2001, attacks in the United States. Police declined comment.

“Do the decent thing, and reconsider, think again about your bid for BSkyB,” Clegg told BBC News, addressing Murdoch, after meeting relatives of one of the victims of phone-hacking, a murdered schoolgirl. – Reuters