Millions of lives threatened in the Horn of Africa 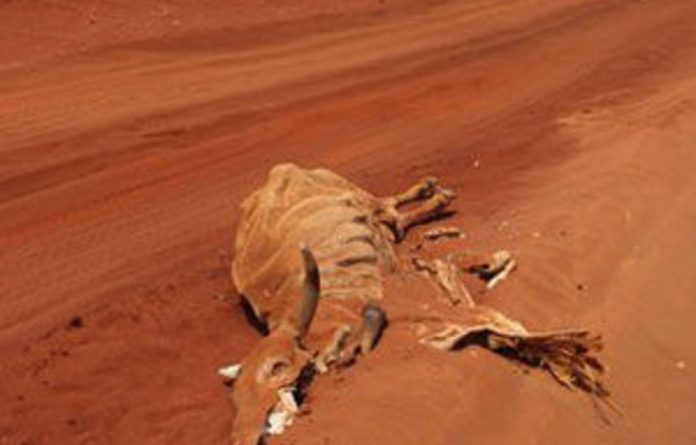 Four-year-old Hussein Musa sits propped against his mother in a thatch-roofed hut, in a section cordoned off under a scorching sun to mark those with the worst symptoms.

“They say he is severely malnourished. He is also suffering from fever and diarrhoea,” said Mako Wabari, his 35-year-old mother.

“We are relying on food aid. We lost 40 goats and sheep, it is the worst drought in three years,” Mako added, before wiping darkened sweat off her forehead with her bright, billowing dress.

Behind the gated health post, a group of elders sit cross-legged on the ground, spreading out their hands in prayer for rain, as a mirage sparkles in the distance.

In Bisle, a remote settlement in Ethiopia’s Somali Region, residents say it is a year since they have had a drop of rain, and their livestock — the area’s vital source of income — are dwindling in number as the months go by.

Across the Horn of Africa, a fierce drought is forcing more than 10-million people to rely on emergency food aid, up from a previous forecast of six-million, according to the United Nations World Food Programme.

Drought and fighting in Somalia mean about 2.85-million people — a third of the population — need humanitarian aid, while about 4.5-million out of a population of 80-million are affected in Ethiopia.

In Kenya, the region’s economic powerhouse, about 3.5-million are at risk of starvation, the United Nations says.

“The situation across the Horn of Africa this year has really deteriorated in terms of food security and that has caused a deterioration in nutritional security as well,” Kristen Knutson, spokesperson for the UN’s humanitarian affairs office in Ethiopia, told Reuters.

Much of the region relies on the rains between October and December, but they failed completely last year. Rainfall during the other vital season — March to May — was late and erratic this year.

“The immediate cause of this is the La Niña phenomenon that has prevailed over the region and the world from the middle of last year until June when it started dissipating,” Knutson said.

In Bisle, village administrator Ige Farah pointed at abandoned mud shacks once thronged with families. More than 5 000 people from a population of 9 000 have travelled long distances in search of greener pastures this year.

“We won’t know for sure when they will return, or whether they ever will,” he said.

Canary in the coalmine
The United States-funded Famine Early Warning Systems Network (Fewsnet) estimates that north-east Kenya, south-east Ethiopia and parts of Somalia — mainly in the centre and south — will be in an “emergency” phase of food insecurity, the stage before “catastrophe or famine”.

This year’s drought is not isolated, and its recurrence is blamed on an anomaly that the region has little to do with.

La Niña, meaning “little girl” in Spanish, is an abnormal cooling of Pacific waters. The same phenomenon has also been blamed for one of the worst droughts in the southern United States.

Its symptoms are rising temperatures and reduced rainfall, and its most common victims are those living in the dry lowlands of impoverished countries.

“The arid and semi-arid lands, the Sahel in Africa — they are the kind of ‘canary in the coalmine’ for climate change,” David Wightwick, regional response leader at Save the Children UK, said.

“If temperatures rise even slightly, if rains falter slightly, then what you are going to have is a disproportionate effect on the population.”

Ethiopia, which has one of the fastest-growing economies in Africa, has suffered from recurrent droughts in recent years.

In arid provinces such as its Somali Region, one solution has been resettling pastoralists from dry patches to more fertile areas, but cases of unwillingness to move and other factors have limited the effectiveness of the plan.

“We have to take the impact of climate change more seriously,” the UN’s top aid coordinator, Valerie Amos, told journalists during a visit to Bisle on Saturday.

“As droughts are becoming so much more frequent, we have to be a lot more innovative and creative in thinking about what some of the long term effects might be,” she said.

Mitiku Kassa, state minister for agriculture in Ethiopia, said his government would give priority to development.

“[One solution] is development intervention. We have to focus on water in pastoral areas,” he said. — Reuters