‘It’s out of control’: Bodies pile up at Bara 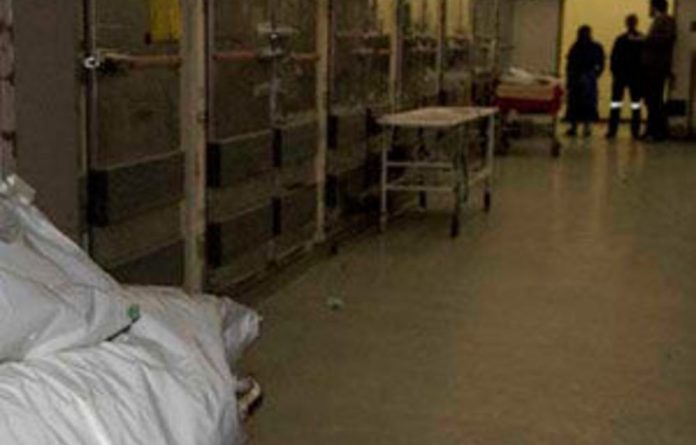 Bodies are piling up in the mortuary of the Chris Hani Baragwanath Hospital because of a backlog in paupers’ burials, aggravated by the high cost of funerals that has left poor families unable to bear the cost of burying their dead.

An investigation by the Mail & Guardian has revealed the hospital’s morgue is harbouring bodies of people long since dead — some who died as far back as January this year.

The slow process of effecting pauper’s burials has been blamed for the bottleneck, as more than 90 unclaimed bodies await interment.

Bloated bodies covered in plastic sheeting with nothing more than an ID tag wrapped around the legs or arms to record the cause and date of death are stacked into fridges, some right on top of one another.

Additionally, there are more than 100 dead babies in the mortuary. Many of these were abandoned, some were stillborn and others died only a few hours or days after birth. As many as 30 such bodies are piled onto a tray designed for a single adult cadaver.

Bodies kept at the morgue for extended periods of time are in an open-plan refrigerator, littered on stretchers and stacked on shelves. Many show signs of decomposition and exude a sharp stench.

Lack of funding
The lack of funds for proper burials has been blamed for the overcrowding.

According to the spokesperson for the Gauteng health department Simon Zwane, unclaimed corpses must be kept for 30 days before a burial — at the state’s expense — can be undertaken.

In the case of families who cannot pay for a funeral, an application must be made to a municipality for an indigent burial.

‘They do nothing’
As if the piles of bodies and the stench of rotting flesh hanging in the air were not enough of a challenge for workers at the mortuary, they are also faced with power failures and a lack of protective gear such as gloves and surgical masks.

“It’s sad — many people don’t have money to bury their family, but it’s out of control. We tell them [hospital administrators] the mortuary is overcrowded, but they do nothing,” a mortuary worker — who preferred to remain anonymous for fear of reprisal — told the M&G.

Some workers say they have fallen ill as a result of working in close proximity to the bodies, while others complain of a lack of medical treatment for any infections picked up during their duties.

“They can fire me, but I am fighting for my rights and my health. Things cannot go on like this; they must change,” the source added.

Unions threaten action
The Soweto hospital — the largest in the southern hemisphere — is facing a raft of challenges, with unionised employees calling for the CEO Johanna More to resign due to poor management.

The hospital has faced intermittent power failures — which led to a backlog in scheduled surgeries, lack of hot water, as well as allegations of staff maltreatment.

Unions at the hospital — including the National Education Health and Allied Workers’ Union (Nehawu) — handed over a memorandum of demands on July 8, threatening industrial action should their demands not be met.

The demands include the disbanding of all workplace forums, the re-opening of the maternity ward kitchen and union consultation in high-level decisions made by hospital administrators — with separate calls being made for More’s resignation.

More held a press conference alongside Gauteng premier Nomvula Mokonyane on Tuesday, blaming the work of saboteurs for problems at the hospital.

Speaking to the M&G, Nehawu spokesperson Sizwe Pamla said the overcrowding in the mortuary was indicative of the massive crises that face the hospital.

“I am not surprised by this at all. If management has an attitude of blaming sabotage for the problems, how can you address the real issues?

They are out of their depth and things are slowly eating away the hospital,” Pumla said.

The hospital’s management were not immediately available to respond to questions posed by the M&G.

Behind the masks: Meet the people who keep Gauteng’s Covid-19 field hospital going

Collusion, competition and corruption — A new Rx for better healthcare?