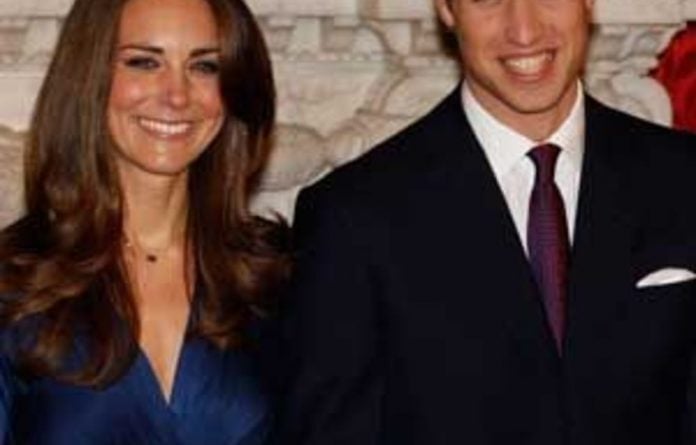 On the last night of the Duke and Duchess of Cambridge’s tour of north America, the big question was who would bother to turn out — in evening dress on a hot night an at ageing art nouveau theatre in a rundown part of central Los Angeles — for a dinner to promote British film talent, with the off-chance of meeting the royal couple.

The answer, of course, was practically everyone in town.

Barbra Streisand was there, Tom Hanks was there, Nicole Kidman was there, Jennifer Lopez was there — and brought her mum along — Jack Black was there, James Gandolfini of Sopranos fame was there, Quentin Tarantino was said to be there — and that was before you got to the famous Brits in Hollywood: Stephen Fry, Dominic Cooper, Russell T Davies, Cat Deeley, er, Gordon Ramsay and, double er, Piers Morgan.

The most expensively made-up women in the world
Some studios — Disney among them — had forked out $25 000 (R170 000) each for one of the 10-seater tables, and the guest list also included a great many middle-aged, anonymous men in black tie, accompanied by some of the most expensively made-up women in the world, who looked as if they might once have been in something. The Guardian diffidently approached one to ask whether she was one of the talented young Brits. “No, I am the partner of the caterer,” she replied.

For such an array of talent there was even a red carpet to walk down, past a row of journalists, cameramen and photographers. For the young British talent, who were at the heart of the evening — 42 young actors, directors and video games developers highlighted as “Brits to watch” and given the opportunity to bond and make contacts around the laden tables — it may have been the first red carpet they have had a chance to stroll in California. Bafta, the British Academy of Film and Television Arts, sponsors many of them and Prince William is the Bafta president.

Understandably, the Brits were the ones keenest to stop and talk to the British media. Thus, Katie Sole, film producer: “I think it’s great, really inspiring that they [the royal couple] want to be here. I was brought up in Ascot so I know what it means.”

And Nigel Lythgoe, Bafta’s director in Los Angeles, now better known in the US as the suave “Nasty Nigel” of Pop Idol: “As a Brit, you can’t just call up and say I’m in Los Angeles, can I come and see you? It just doesn’t happen like that.

The X Factor
“This is under one roof all the top echelon of executives in film and television and these 42 young Brits are going to be exposed to them. We are going to show their work on video, we’re going to let them sit at the tables, it’s just wonderful.”

As for the duchess, his verdict was inevitable: “She has what Simon Cowell would say is the X Factor.” Of course he would.

Nearby, Stephen Fry, whose ubiquity meant he had already met the royal couple at one reception, was avuncularly philosophising on their presence. “You don’t have to believe in monarchy in the medieval sense to realise what a tremendous advantage they give. You would have to be tremendously mean-spirited to say anything bad about them. The best hot-dog stall in town, Pinks, has even produced a Royal Frankfurter — two dogs in one bun — to greet their arrival. If you brought back Clark Gable and Marilyn Monroe to life you could not have had more excitement.”

That might have been so, but the crowd across the road, although noisy, was small, only a couple of hundred, others perhaps put off by having to wait for many hours on a dull, dusty side road in the heat — unlike the stars, who came in the cool of the evening, and the royal couple, who arrived after the duke had spent a successful afternoon playing polo at Santa Barbara.

The crowd whooped as the stars paraded, the women pausing to pose and be photographed in their evening wear. Only Nicole Kidman could be persuaded to say something cogent: “I think they are lovely — amazing. They make me smile. I just got off the phone with my mother and my mum said: ‘I am so glad you are going to be there — we are Australian.'”

The real deal
A more minor star, Jason Bateman, said: “It is certainly exciting that royalty has come to our city, to our weird little industry. I am assuming they are movie buffs. The only good thing about being famous is you get the chance to meet someone you may admire and they may actually want to talk to you too. They are real movie stars — we are just faking it and getting paid for it; they are the real deal.”

And then the real deal arrived in a small motorcade to huge cheers and cries of “we love you”. The remaining lingering stars were ushered inside for a reception, where they were told by Duncan Kenworthy, Bafta’s Los Angeles president: “Please don’t all rush over, be cool in this coolest of towns. Trust me, they will try and chat to all of you.

“You can call them whatever you want: sir, madam, Will and Kate. They are very relaxed, as I am sure you will be.”

The movie crowd took no notice, chatting among themselves and happily ignoring the video of the young British talent in action being played on screens on the stage.

The gossiping only stopped as the prince stepped forward, essaying a joke: “I would like to thank Colin Firth for my perfect opening line: ‘I have a voice’,” he started diffidently, proving that at least one member of the royal family has seen The King’s Speech.

Down in the gold and dark red plush of the Belasco Theater’s auditorium, where the tables were set out, the young British talent was interspersed with the old Hollywood talent that may one day notice them. On a centre table, Fry sat near to Hanks with Gandolfini opposite, but the royals made a beeline straight for the latter, famous for his role as Tony Soprano, who favoured them with his wry Mafia grin.

Flapping urgently
At the top table, Kidman and Streisand were waiting — the latter the only star too grand not to have bothered walking the red carpet. Both found themselves ignored as the royals sat down, gazing only at each other before belatedly acknowledging the stars sitting opposite.

Streisand was hidden from them behind a large table lamp, around which her hand came flapping urgently in greeting. Sometimes even the greatest stars can’t resist getting in on a piece of the action.

William and Catherine visit more humble folk today — an inner-city arts project and a centre for injured former servicemen — before flying home by a scheduled flight, although it is a safe bet that they will not be travelling cabin class.

Their trip to Canada, with its brief stopover in Los Angeles — a celebrity-obsessed city that William’s mother, Diana, never got to — has been a clear success. Large and enthusiastic crowds greeted them across Canada and the couple engaged with those they met with ease and charm. They did not put a foot wrong, no gaffes, no tantrums, just smiles — and their success means they will be asked to do it again, and again.

It may postpone, if not change, the ultimate fate of the monarchy, but they have sprinkled a little stardust over the battered old institution. As Licia Corbella, a columnist on the Calgary Herald, wrote this week: “It is undeniable that they are breathing new life into a monarchy grown stodgy and seemingly irrelevant to younger generations. It doesn’t hurt either that they both look hot in jeans and cowboy duds.” Well, up to a point: the duchess’s costume count had reached 23 by yesterday.
—