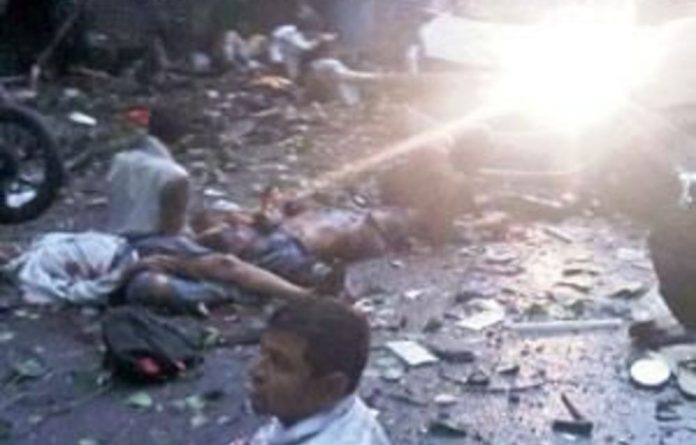 Indian police searched for clues on Thursday about who was behind three coordinated bomb blasts that killed at least 17 people in Mumbai, the biggest attack since Pakistani-based militants rampaged through the financial hub in 2008.

Mumbai police blamed Wednesday’s attacks on the Indian Mujahideen, a shadowy home-grown Islamist group said to have support from militants in Pakistan, according to source-based media reports that could not be independently confirmed.

The government’s official press office lowered the death toll to 17 from an earlier figure of 21 killed, although the number may change again.

The bombings were the biggest militant attack on Mumbai since the 2008 assaults killed 166 people, raised tensions with neighbour and nuclear rival Pakistan, and left a city on edge.

There was no immediate claim of responsibility for the blasts.

Newspaper headlines voiced a mix of resignation and outrage over the latest attacks on a city of more than 10 million that is home to India’s main stock exchange .

Indian Home Minister Palaniappan Chidambaram, who flew to Mumbai from New Delhi on Wednesday night and visited the blast sites as well as hospitals treating victims, was due to give a media briefing at 9.30am local time (4am GMT).

The blasts came as beleaguered Prime Minister Manmohan Singh struggles to get past a series of corruption scandals and a resurgent opposition that has led to policy paralysis in Asia’s third largest economy. A Cabinet reshuffle this week was criticised as too little, too late.

India’s stock and commodity exchanges were due to open as normal on Thursday and schools were set to open, although heavy monsoon rains led to delays and cancellations of train services during the morning rush hour.

Mumbai has a long history of deadly bombings and Wednesday’s attacks were unlikely to rattle financial markets.

“This is another attack on the heart of India, heart of Mumbai. We will fully meet the challenge, we are much better prepared than 26/11,” Prithviraj Chavan, the state’s chief minister, told NDTV on Wednesday evening, referring to the 2008 attacks.

The blasts occurred at about 6.45pm (1.15am GMT) on Wednesday within minutes of each other. At least one car and a motorbike were used in the coordinated attacks in which improvised explosive devices were believed to have been used, officials said.

The biggest blast was in the Opera House area, a hub for diamond traders. Pakistani-based militants carried out the bloody rampage in 2008 near the same popular area.

Another blast, also in south Mumbai, was at the Zaveri Bazaar, India’s largest bullion market which was hit twice in the past. The third blast was at Dadar, in a crowded street housing Muslim and Hindu shops in the centre of the coastal city.

Targeting two markets that trade in diamonds, gold and silver could also suggest the near-simultaneous attacks may have been linked to the Mumbai underworld, some newspapers speculated.

There was no immediate indication any Pakistani group was involved. But any suggestion of attributing blame to Islamabad would complicate a fraught relationship with India — with whom it has a long-running disuptre over Kashmir — and further unravel ties with the United States.

The United States has withheld some military aid to Pakistan to pressure it to buckle down in the war on terror.