Bodies pile up at Bara morgue 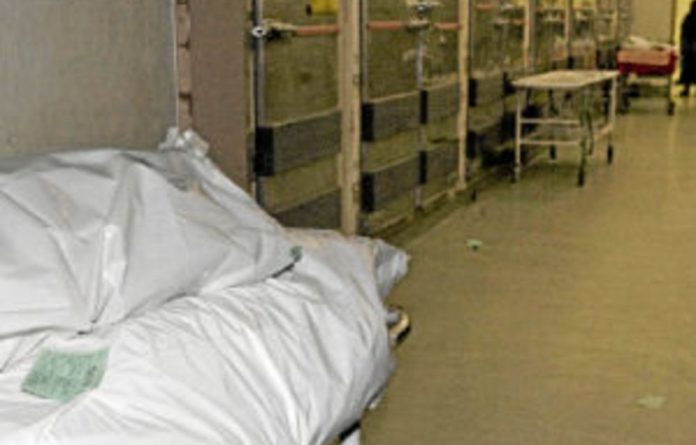 Bodies are piling up in the mortuary at Chris Hani Baragwanath Hospital owing to a backlog in paupers’ burials. The high cost of funerals means that many poor families cannot afford to bury their dead.

The hospital’s morgue is storing more than 90 adult cadavers that have long passed the statutory 30 days for bodies to be kept in a mortuary.

There are also the corpses of more than 100 babies who were either stillborn or died after being abandoned at birth, with as many as 30 piled on a tray designed for a single adult cadaver.

Many bodies are piled on top of one another in fridges and others lie in an open-plan refrigerator, littered on stretchers and stacked on shelves, most in an advanced stage of decomposition and exuding a sharp stench.

The lack of funds for proper burials, and slow administrative processes have been blamed for the overcrowding.

In the case of unidentified bodies a pauper’s funeral should be done and paid for by the state after all attempts to reach the next of kin are exhausted.

For the families who cannot afford a burial, an application must be made to a municipality for an indigent burial.

According to Avbob, South Africa’s biggest funeral parlour, the average cost of a pauper’s funeral is R2 200, with the most affordable interment charged at R6 595.

Workers at the mortuary face many challenges, including a lack of protective gear such as gloves and surgical masks, and say power failures occur often, intensifying the decay of corpses. “It’s sad. Many people don’t have money to bury their family, but it’s out of control. We tell them [hospital administrators] the mortuary is overcrowded, but they do nothing,” a mortuary worker, who preferred to remain anonymous for fear of reprisals, told the Mail & Guardian.

Some mortuary workers say they have fallen ill as a result of working in close proximity to the bodies, while others complain of a lack of medical treatment for any infections picked up during their duties.

A senior medical practitioner at a state mortuary affiliated to the University of KwaZulu-Natal, who is professionally bound by the department of health to remain anonymous, told the M&G there is a high risk of contracting infectious diseases — such as hepatitis and tuberculosis — from working closely with bodies without the correct protective equipment.

“All bodies are highly contagious at all stages after death, especially if they are not kept at a cool temperature. In line with the Occupational Health and Safety Act all people working in a mortuary must at least wear the basics, like gloves and surgical masks,” the medical source said.

The embattled Soweto hospital, the largest in the southern hemisphere, is also experiencing a backlog in scheduled surgeries due to intermittent power and a lack of hot water.

Staff also claim they are maltreated. Unions at the hospital, including the National Education, Health and Allied Workers’ Union (Nehawu), handed over a memorandum of demands on July 8, threatening industrial action should their demands not be met.

The unions’ demands include the disbanding of all workplace forums, the re-opening of the maternity ward kitchen and consultation with unions when high-level decisions are made by hospital administrators. A separate call is made for hospital chief executive Johanna More’s resignation.

More held a press conference, with Gauteng premier Nomvula Mokonyane, on Tuesday, during which she blamed saboteurs for problems at the hospital.

Speaking to the M&G, Nehawu spokesperson Sizwe Pamla said the overcrowding in the mortuary was indicative of the massive crises the hospital faces.

“I am not surprised by this at all. If management has an attitude of blaming sabotage for the problems, how can you address the real issues? It is out of its depth and things are slowly eating away the hospital,” Pamla said.

Health department’s spokesperson Simon Zwane said it was standard practice to store multiple bodies on stretchers in the coldroom. The 180-capacity mortuary fridge is used to store the single corpses.

Covid-19 Boosters: Why time is not enough to get people to line up for their next shot