Murdoch: Most humble day of my life 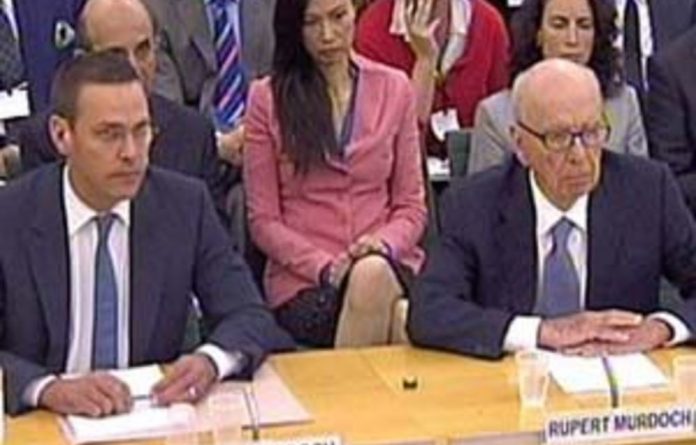 Rupert Murdoch told the British Parliament on Tuesday that giving evidence on the phone-hacking and corruption scandal that is engulfing his global media empire was “the most humble day of my life”.

Sitting next to his son James, who opened the much-awaited proceedings in a committee room at Westminster by apologising for the distress caused to victims of voicemail hacking, the 80-year-old magnate briefly interrupted:

“I would just like to say one sentence: This is the most humble day of my life,” the Australian-born chief executive of United States-based News Corporation said.

He later said he was “shocked, appalled and ashamed” when he read two weeks ago about the case which has transformed the long-smouldering scandal into a matter that has shaken Britons’ confidence not only in the press, but also in the police and in politicians, including Prime Minister David Cameron.

But asked flat out if he considered himself personally responsible “for this fiasco”, Murdoch replied simply: “No.”

Asked who was he said: “The people that I trusted to run it, and then maybe the people they trusted.”

Several people were ejected from the packed public area of the room as proceedings were beginning after holding up posters reading “Murdoch wanted for news crimes”.

Later during questioning, Murdoch insisted that he had been misled when previously denying that phone hacking at his News of the World tabloid went beyond the case of a reporter who was jailed for the offence in 2007. Slapping the table in apparent frustration, he said the paper was only a small part of his business, suggesting he could not supervise it personally.

The newspaper, the country’s biggest selling Sunday journal, was closed 10 days ago as a result of the hacking scandal.

Asked by name about one of the 10 journalists arrested this year by police probing the phone-hacking, he said: “Never heard of him.” But he said: “We have broken our trust with our readers.”

As the session before the lower house media committee got under way, the chairperson rejected a request by James Murdoch, the 38-year-old heir apparent and chairperson of British newspaper unit News International, to make an opening statement.

However, after a first question, the younger Murdoch began by offering an apology: “First of all I would just like to say how sorry I am and how sorry we are to particularly the victims of the illegal voicemail interceptions and to their families.

“It is a matter of great regret, of mine, of my father’s, and everyone at News Corporation. These actions do not live up to the standards that our company aspires to everywhere around the world and it is our determination to put things right, to make sure these things do not happen again and to be the company that I know we have always aspired to be.”

The two Murdochs sat side by side at a table facing the horseshoe of lawmakers asking their questions. Occasionally, the younger Murdoch attempted to break in to answer questions posed to his father. The elder Murdoch’s wife, Wendi Deng, sat behind him.

Police under fire
With a second British police chief quitting on Monday over the scandal, Cameron cut short a trade trip to Africa and was due to return in time for an emergency debate on Wednesday in Parliament, which is delaying its summer recess.

Speaking in Lagos, Nigeria, before flying home as the committee hearing began, Cameron said he was committed, through new investigations, to addressing three key problems: “The wrongdoing in parts of the media and the potential that there is corruption in the police and … the third … which is the relationship between politicians and the media.”

But he also signalled a desire to push the agenda away from a scandal that has dominated every debate for two full weeks: “The British public want something else too,” Cameron said.

“They don’t want us to lose our focus on an economy that provides good jobs, on an immigration system that works for Britain, a welfare system that is fair for our people.”

The Murdochs’ appearance before Parliament’s media committee was expected to attract a television audience of millions, not only in Britain, but also notably in the United States, where Murdoch controls Fox television and the Wall Street Journal among other businesses.

“I want to feel the atmosphere in the room and actually witness history unfold,” said Max Beckham (21) from London as he lined up for one of the few public seats on offer. “This hearing could signal the end of Rupert Murdoch’s reign.”

Another eager witness in the public gallery, Canadian tourist Andy Thomson (40) called it “the best show in town”.

Defence crumbled
Murdoch’s British arm, News International, had long maintained that the practice of intercepting mobile phone voicemails to get stories was the work of a sole “rogue reporter” on the News of the World newspaper.

The floodgates opened two weeks ago when a lawyer for the family of a murdered teenage schoolgirl said the paper had hacked her phone when she was missing, deleting messages and raising false hopes she could be still alive.

The ensuing outrage prompted News Corp to close the 168-year-old News of the World and drop a $12-billion plan to take full control of pay TV operator BSkyB , and saw the arrest of former News International chief executive Rebekah Brooks, a Murdoch protge who once edited the newspaper.

Cameron has faced questions over his judgment in appointing former News of the World editor Andy Coulson as his communications chief, while London police chief Paul Stephenson and anti-terrorism head John Yates stepped down over links to Coulson’s former deputy, appointed as an adviser to the police.

Survival at stake
Former Murdoch editor Bruce Guthrie, who worked for the company in Melbourne, said Murdoch faced a fundamental decision on the fate of the company he has built up into a global media giant from an Australian newspaper business.

“If he really is bent on saying I want this company remaining in the control of my family, which would be James, I reckon he has to take a bullet for James.”

A News Corp board member told Reuters the group’s independent directors were fully behind Rupert Murdoch. There has been talk in recent days that Chase Carey would be elevated from chief operating officer to take over from Murdoch, as CEO, with the latter staying as chairperson.

Some shareholders have expressed doubts about whether James Murdoch should take over from his father.

Corporate governance watchdog PIRC, which advises many institutional investors said the younger Murdoch should step down as chairperson of the broadcaster: “Other investors share our opinion,” it said in a statement.

“The risk of contagion is great … How, in reality, can someone facing challenges on all sides expect to devote sufficient attention to chairing a FTSE 100?”

On Monday, Standard & Poor’s said it may cut News Corp’s credit rating from the current BBB+, given the risks associated with widening legal probes in Britain and pressure for an FBI investigation in the US.

“No circus”
The parliamentary media committee has been pursuing the phone-hacking allegations for more than four years, saying in a report in 2010 that it was inconceivable that managers did not know about the practice.

“We intend to be calm and forensic. There will be no circus, no playing to the gallery because we really need to get to the bottom of everything that has gone on,” said Farrelly, a former journalist who once worked for Reuters.

“We want to know who knew what, and when, and how wide the whole ambit of illegal activity, of which phone-hacking was only one part, went, and how far any cover up went.”

In another development, police said a man believed to be former News of the World journalist Sean Hoare was found dead at his home near London on Monday.

It was Hoare who told the New York Times that phone hacking at the tabloid was far more extensive than the paper had acknowledged at the time. The former show business reporter also told the BBC he was asked by Coulson, who went on to work for the prime minister, to tap phones.

James Murdoch said earlier this month that the News of the World “made statements to parliament without being in full possession of the facts” and he is certain to be questioned on that statement.

Brooks, who is due to appear after the Murdochs, resigned as News International chief executive on Friday and was arrested by police on Sunday on suspicion of corruption and intercepting communications before being released on bail.

The Guardian newspaper said detectives were examining a computer, paperwork and a phone found in a bin near Brooks’ riverside London home.

Brooks’ spokesperson dismissed the story as “rubbish” but said the personal computer of her husband Charlie had mistakenly got into the hands of the police. The couple were waiting to get it back after the police had examined it.

Questions for Cameron
Conservative Prime Minister Cameron, who took office in May 2010 after 13 years of Labour rule, is facing the worst crisis of his premiership as his decision to hire former News of the World editor Coulson as his communications chief in 2007 comes back to haunt him.

Coulson quit the paper earlier that year when the paper’s royal reporter was jailed for phone hacking. Coulson said he knew nothing of the practice but took responsibility.

Coulson resigned as Cameron’s spokesperson in January when the long-running scandal came back to life. He was arrested earlier this month and is also free on bail.

Few expect Cameron to quit but he appears weakened as head of a deficit-cutting coalition and might find his room for manoeuvre limited.

John Yates, the other senior officer to resign, followed Stephenson before Parliament’s home affairs committee. As he did last week, he defended his decision in 2009 not to reopen inquiries after the Guardian newspaper ran a story alleging hacking had been widespread at Coulson’s News of the World.

Stephenson was subjected to over an hour of intensive questions about his relationship with Wallis, his acceptance of a free spa break and his force’s failure to reopen inquiries more swiftly into allegations that hacking was widespread.

Computer hackers turned the tables on the media group when some broke into the website of Rupert Murdoch’s best-selling British tabloid, the Sun. They altered the front page to show a fake report about the media mogul’s death. Staff at the Sun and its sister papers were told to change passwords. — Reuters