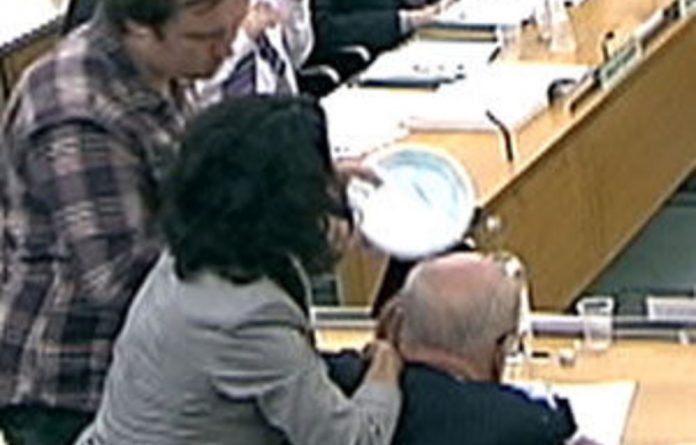 When Rupert Murdoch got a face full of foam at the parliamentary hearings into the phone-hacking scandal on Tuesday, he was simply the latest in a long list of prominent figures who have been targeted in this way. Ever since comedians such as Mack Stennett, Charlie Chaplin and Laurel and Hardy popularised the pie-attack in their films — and Monty Python offered lessons in the perfect delivery of the object — it has been translated into a real-life form of protest and humiliation.

So why pie? For a start its pretty harmless, leaving only the target’s ego bruised. Sure, the target may be left shaken, stunned and in need of a bath but compared to what could happen when someone is able to get that close to a public figure without security intervening, it’s hardly worth worrying about.

It’s a pretty sneaky weapon too — no one can be arrested for having an unlicensed pie on their person or any of the artillery used in similar attacks (eggs, old fruit, etc).

And the message is loud and clear — we don’t want to hurt you, we just want to make the world laugh at you. Which can be pretty terrifying when you are a public figure who takes themselves too seriously.

A pie and a prayer
US singer Anita Bryant was known for her outspoken opposition to homosexuality and was one of the first public figures to be pied during a television appearance when she was targeted at a press conference at which she was explaining her homophobic views. Her response? “At least it’s a fruit pie” and she then said a prayer for the pie-thrower. The perpetrator was Aron Kay — a member of the Yippie Party (nicknamed the Groucho Marxists), a group known for their publicity stunts that targeted conservatives. He would go on to become a legend in the pie-throwing community, also targeting Andy Warhol and William Shatner.

No such thing as too much pie
When pie-thrower extraordinaire Noel Godin successfully pulled off a multi-pie attack on the world’s richest man in 1999, there were many who wished they had thought of it first. Faced with yet another blue screen of death as he booted up his PC, Godin called in the help of 30 collaborators who greeted Bill Gates as he arrived at a meeting of the European Union in Belgium. Gates was stunned and shaken — understandably — as he continued to be pelted with pies while he was rushed into the venue. Godin, who considers the act of entartage an important form of political expression — and had strict rules about the types of pie used (he favours the whipped cream tarte classique) — retired after the incident saying: “My work is done here.” Look him up. You’ll be glad you did.

Taking one for the team
Jeremy Clarkson was targeted by environmentalists when he was preparing to receive an honorary degree. His reaction, however, was a lesson in how to take a pie with dignity. Rather than dashing off in a dazed fluster he congratulated the perpetrator on her excellent delivery and aim before calmly strolling off to tidy himself up. Maybe he saw it coming.

Large corporates whose business has thrived because of inequalities, could be hijacking the anti-racist movement by offering money and not tangible changes
Read more
Coronavirus

To fight Covid-19 in Africa, we must fight inequality

Our global health is only as strong as our most vulnerable community. The coronavirus pandemic can be defeated — but only if we leave no one behind
Read more
Africa