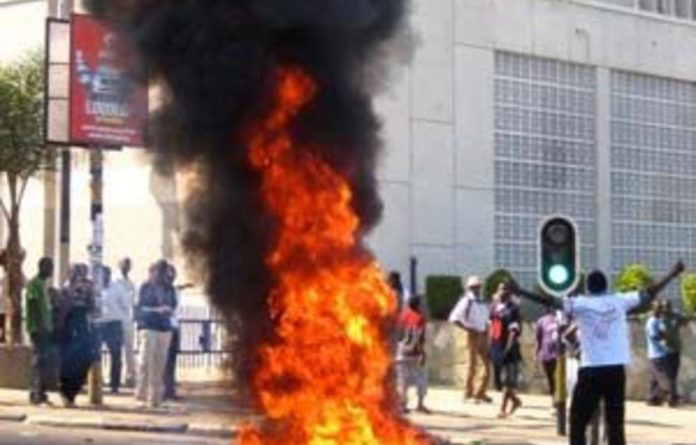 One person was shot dead and six injured in the northern town of Mzuzu, a hospital official said, while police beat activists with rifle butts in the capital Lilongwe and fired teargas in the commercial hub Blantyre.

“One person died this afternoon from gunshot wounds. A total of seven people with gun wounds were admitted at the hospital. We are still treating the remaining six,” said an official at Mzuzu’s main government hospital, speaking on condition of anonymity.

“Police were the only ones who were shooting,” the official added.

Police declined to comment on the shooting, but spokesperson Davie Chingwalu said several officers were injured in Mzuzu and four homes were set ablaze in Lilongwe.

The looting continues
“There has been a lot of looting. People want to loot shops here in Blantyre as they go home. But we are now chasing them away,” he added.

The protests began early in the day in Lilongwe, where about 400 people gathered in the city centre to march.

After a group of Mutharika supporters announced their own rally, a court issued an injunction blocking both gatherings to prevent “possible disruptions and undesirable incidents”.

The injunction was overturned later in the day, but when police moved to enforce the initial order in Lilongwe, protesters torched police officers’ homes and government vehicles.

Police responded with tear gas, finally beating back the crowd with the butts of their rifles, said Human Rights Commission spokesperson Mike Chipalasa.

“They have been beaten terribly and thrown into a riot police van,” Chipalasa said by telephone.

Activists arrested
Among those arrested and later released was Undule Mwakasungura, chairperson of the Human Rights Consultative Committee who organised the demos, said Chipalasa.

Several journalists and photographers were also arrested and beaten, according to witnesses.

“The situation was very ugly with the leaders being beaten and thrown into the vehicle,” Chipalasa said. “The police were overwhelmed here by the crowd of people, although they finally suppressed the rioting crowd.”

Another witness in Lilongwe said that protesters ransacked two businesses owned by lawmakers of the ruling Democratic Progress Party.

In the commercial hub Blantyre, protesters marched peacefully to the city clerk’s office to hand over a petition calling on government to fix the ailing the economy and voicing concern over Mutharika’s governance.

Tear gas
Police then ordered the demonstrators to return, and fired tear gas when they refused.

Mutharika won plaudits after winning 2004 elections for reviving agriculture and ending a famine with a popular but expensive fertiliser subsidy programme.

But Malawi’s budget is now strained, resulting in foreign currency shortages that are hurting the economy, most visibly with a shortage of fuel that causes long queues at the pump.

Dictatorial trend
In his second term, Mutharika has also taken steps to restrain the media, limit protests, and restrict lawsuits against the government, prompting the opposition to accuse him of taking a dictatorial turn.

A British diplomatic cable leaked in April echoed that concern, accusing Mutharika of “becoming ever more autocratic and intolerant of criticism”.

The resulting diplomatic spat resulted in both countries withdrawing their ambassadors, while London last week suspended around £19-million of budgetary aid meant for anti-poverty programmes in one of the world’s poorest countries. — Sapa-AFP