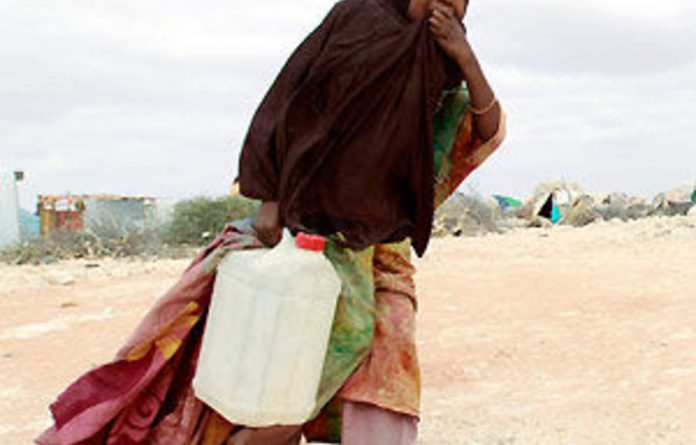 The United Nations has officially declared that parts of Somalia are in the grip of famine, a move welcomed by rebels who now say they will allow Western aid to be distributed.

Famine implies that at least 20% of households face extreme food shortages, acute malnutrition in over 30% of people, and two deaths per 10 000 people every day, according to the UN’s definition.

As the world slowly mobilised to save the 12 million people battling hunger in the region’s worst drought in 60 years, the Al Qaeda-inspired rebels controlling the area welcomed the UN declaration and agreed to allow the return of the relief groups they expelled two years ago — though aid groups warned many would die without urgent action and funding.

“The United Nations declared today that famine exists in two regions of southern Somalia: southern Bakool, and Lower Shabelle,” said the UN Office for the Coordination of Humanitarian Affairs for Somalia.

The region is Somalia’s breadbasket and the UN said that an estimated 3.7-million people — or nearly half of the war-torn country’s population –were facing a food crisis.

“If we don’t act now, famine will spread to all eight regions of southern Somalia within two months, due to poor harvests and infectious disease outbreaks,” UN humanitarian coordinator for Somalia Mark Bowden told reporters.

“If we are not able to intervene immediately, tens of thousands more Somalis may die,” the UN added.

Somalia, which has been affected by almost uninterrupted conflict for 20 years and become a by-word for “failed state”, is the worst affected nation but parts of Kenya, Uganda, Ethiopia and Djibouti are also hit.

“The declaration of famine in parts of Somalia by the UN is welcome and we would like to see aid coming to the people,” a senior Shebab official said on condition of anonymity.

The Shebab announced earlier in July that they would allow humanitarian organisations to provide aid in the regions they control.

However, the hardline rebel official warned that Islamic values must be maintained.

“Aid must be provided purely on a humanitarian basis, and the religious value of Somalis as Muslims must be respected,” the official added.

“The Shebab mujahidin were always ready to assist the Islamic people of the nation to the best of their ability, and will cooperate with anyone assisting the victims of the famine,” he said.

No relief
The Shebab expelled foreign aid groups two years ago, accusing them of being Western spies and Christian crusaders.

However, the UN last week airlifted in the first supplies since the group said it would lift restrictions on aid.

Malnutrition rates in Somalia are currently the highest in the world, with peaks of 50% in certain areas of southern Somalia, Bowden said.

“Every day of delay in assistance is literally a matter of life or death for children and their families in the famine affected areas,” Bowden said.

Refugees
Over 78 000 Somalis have fled to seek refuge in neighbouring Ethiopia and Kenya in the last two months.

In Kenya, migrants are streaming into overcrowded camps already hosting about 380 000 people — more than four times their intended capacity.

On Tuesday, the UN refugee agency said death rates among refugees arriving in Ethiopia’s Dolo Ado area had reached 7.4 per 10 000 in June, 15 times more than the baseline rate in sub-Sahara Africa.

Somalia’s embattled government welcomed the famine declaration — the first since the term was defined by the UN in 2008 — as a sign that the world was beginning to acknowledge the scope of the disaster.

Hardship
“At least it is great that the world has recognised the magnitude of hardship the poor Somalis are facing,” said Abdulkadir Moalim Nur, a minister in the president’s office.

The Food and Agricultural Organisation appealed Wednesday for $120-million for the 12-million drought victims in the Horn of Africa.

Aid group Oxfam said only $200-million of the needed one billion had been provided.

“There is no time to waste if we are to avoid massive loss of life. We must not stand by and watch this tragedy unfold before our eyes,” said Fran Equiza, Oxfam’s Regional Director.

The government’s authority over the vast country is limited and Johnnie Carson, the US assistant secretary of state for African affairs, stressed that the Shebab’s responsibility in the suffering was clear.

‘Rebels at fault’
“Al-Shebab’s activities have clearly made the current situation much worse,” Carson told reporters.

UN agencies will hold a meeting in Rome on Monday over the drought-sparked humanitarian crisis as the world’s top leaders called for mass mobilisation to contain one of the planet’s worst unfolding humanitarian disasters.

As he toured the continent earlier this week, Britain’s Prime Minister David Cameron described the Horn of Africa drought as the worst humanitarian catastrophe in a generation.

US Secretary of State Hillary Clinton has also pledged more funds to tackle the crisis and called for the international community to follow suit. — Sapa-AFP