Take the shower back? No, Zapiro will not yield 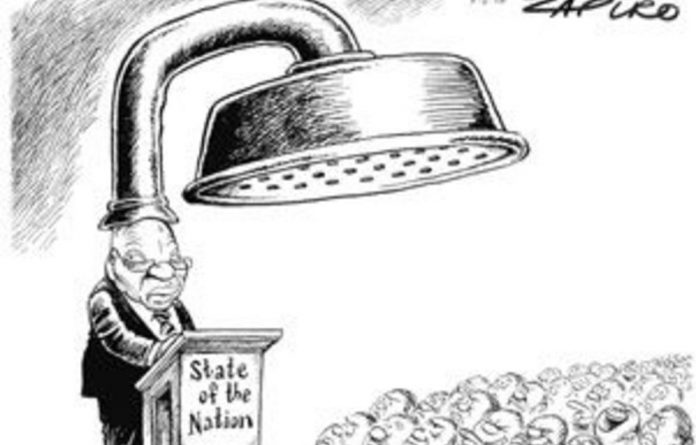 Satirical cartoonist Zapiro is unfazed by criticism from the Commission for the Promotion and Protection of the rights of Cultural, Religious and Linguistic Communities, for continuing to put a shower head above Jacob Zuma in his depictions of the president.

The commission said on Wednesday that it was “saddened” by the continued depiction of President Jacob Zuma with a shower on his head in Zapiro’s cartoons.

“It is culturally, religiously and linguistically unprecedented to attack each other on the basis of a forgiven past,” the commission’s chief executive Pheagane Moreroa said in an open letter to cartoonist Jonathan Shapiro, or Zapiro, as he signs his cartoons.

“This type of gutter attack on a president duly and democratically elected by a handsome majority of the people of South Africa does not contribute to nation building and social cohesion, which is a constitutional ideal.

“Mr Shapiro displays an unbelievable insensitivity to cultural sensibilities of all decent-minded people. His cartoons on the president appear to be calculated to attack the psyche of a people emerging from a shameless past in which successive oppressive regimes ruled.”

“How do we explain these cartoons of both the shower — which, in any case, involved a personal issue — and the preparing-to-rape action to our children? The president, as a citizen of this country, also has an inalienable right to human dignity.”

But on Wednesday Shapiro said he viewed the issue in a somewhat different light.

“I am outraged by the unethical actions and statements of Jacob Zuma in his insatiable pursuit of power,” he said.

“Those words and actions prompted me to produce an image which I know is shocking, but was so important to the whole nation that I felt public interest far outweighed the sensitivities that could be bruised by the cartoon,” he said of the cartoon depicting Zuma preparing to rape “Lady Justice”, published in the Sunday Times on September 7 2008.

It was published in the context of Zuma’s looming trial on corruption charges, which were eventually dropped, and threats by his allies that there would be “anarchy” if the case continued.

“The idea of justice being raped is something that comes from a very, very long-held understanding of the word rape.

“The idea that there could be some difficulty in explaining to children why there is a disturbing image displays a lack of understanding of satire and criticism.”

Shapiro said the SAHRC’s finding had, to a large extent, “torpedoed” Zuma’s case.

When it rains, it pours
However, Zuma was still taking legal action against Shapiro over the cartoon. The cartoonist had received a summons recently indicating he was being sued for R5-million. He had initially received a letter of demand in 2008 for R7-million.

The shower head that often appears in Zapiro’s cartoons above the president’s head, was first employed by Shapiro after Zuma’s rape trial, during which he said that after having unprotected sex with an HIV-positive woman, he had showered to reduce the risk of contracting the virus.

“It kind of represents the odd statements he’s made, displaying … other prejudices as well,” Shapiro said. “It’s become a little broader and kind of represents his strange public utterances … and lack of morality, making high-minded speeches on World Aids Day and then displaying the opposite in your private life.”

In his open letter to Shapiro, Moreroa further called on the cartoonist to show respect to the office of the president.

“We appeal to Shapiro to respect the president of South Africa, who is not being helped by these insulting cartoons as he meets other world leaders visiting this country. Let us criticise by all means, but let us do it the ubuntu way. Hate the deed, by all means, but not the doer.” — Sapa

“You are too young to mock the government”: Zimbabwean comedian relives her abduction