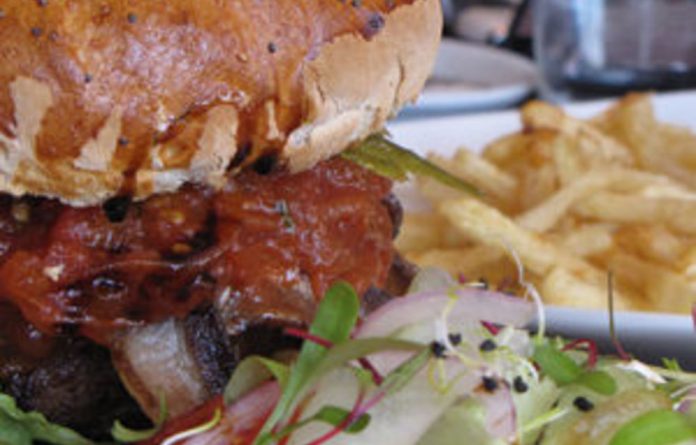 I love a burger just as much as the next (wo)man, but I question whether a beef patty in a bun can ever be elevated from the status of fast food to fine dining. Great before a night out maybe, or as comfort food, but posh nosh? I was pondering this as I entered Dukes in Greenside, Joburg’s newest gourmet hamburger restaurant, which is rapidly becoming a firm favourite with locals for its experimental flavour combinations.

Located on Greenside’s trendy strip, the place has a rock and roll vibe that starts at the velvet couches, flashing TV screens and bling chandeliers and extends to the far-out burger creations, which have names such as Fidel Castro (patty flamed in tequila, topped with jalapenos and spicy tomato salsa) and the Jackie O (lean lamb burger with fresh fruit salsa and tzatziki).

Dukes is the concept of owner Ari Shapiro and his wife Lori Baar, the same team behind the TranceSky nightclub in Melville. Currently, Joburg really only has the Gourmet Garage to rival Royale in Cape Town for upmarket burgers. Ari spotted a gap in the local food market for a posh hamburger joint, which puts the emphasis on quality, an idea which can be seen in Duke’s home-made buns and sauces, and in the mature, premium beef used for the patties.

‘Burgers are fun and everyone loves them, but my main aim is to make them a high-quality food,’ explains Ari, who looks more like a rock star than a restaurant owner. ‘It can take people a while to understand this and why it takes us longer to make a burger than a fast-food place. Visually, we try to make them look stunning.’

Rock n’ roll burgers
There are nearly 40 different options on the menu for beef, chicken, lamb, ostrich and veggie burgers, as well as occasional specials such as kudu or venison burgers. What makes them posh are the unusual flavour combinations, such as the towering 20cm flagship burger, which includes grilled pineapple, mushrooms, fried tomato, egg and bacon, or the Thelma and Louise, which boasts a fig reduction with blue cheese and fresh pears. Chorizo, Jack Daniels, apple and mint jelly and a red wine and chocolate sauce are just some of the more unusual accompaniments on offer. There’s also a great veggie selection, a far cry from the normal limp bean burger, with red lentil and chickpea burger with a Peppadew chutney that tempts even red meat devotees.

Despite the diverse menu, Ari and his chef Lisa Moss say there are still customers who have special requests, and they try to accommodate them whenever possible. ‘You have those who always order the same thing every time, those who are methodically going through the menu and those who want to mix and match ingredients from one burger to another,’ says Ari, who plans to extend the Dukes name to a bar and an even more upmarket burger restaurant.

The service was laid-back and friendly as we tucked into a Duchess burger (with beetroot mustard seed relish and sweet potato crisps) and the Jackie O described above. The burgers had a real depth of flavour, and the home-made buns made a real difference. They didn’t leave me feeling unpleasantly full and queasy — I’ll certainly be returning. Drinks include a reasonable selection of wines as well as a wicked milkshake menu including decadent flavours such as banana and peanut butter, chocolate ganache and gingerbread.