Rangers dive for cover as leopard mauls 11 in India 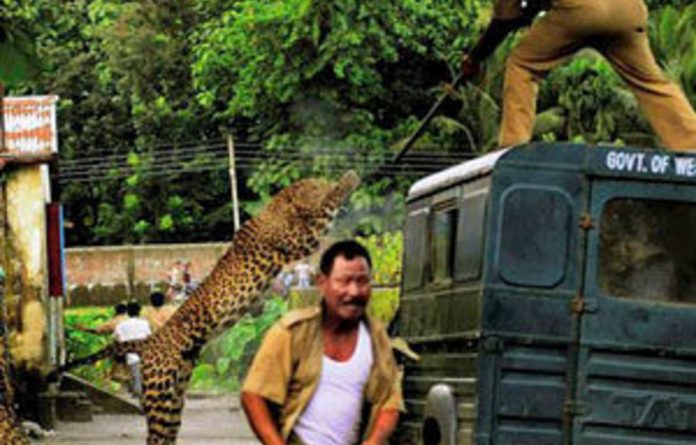 A snarling leopard mauled 11 people in an Indian village and terrorised wildlife officials trying to drive it away before it was tranquilised and died of injuries from the fierce showdown.

Forestry officials were forced to flee, dive for cover and even climb on top of a jeep to escape the adult, male leopard’s attacks in West Bengal state.

At one point, the big cat leapt through the air, fangs bared, and tackled a man, clutching him in its giant paws as it knocked him off the wall he was standing on.

The wildlife officials — wearing protective helmets and carrying batons and tranquiliser guns — had hoped to drive the cat into a nearby wildlife sanctuary after it wandered into the village near Siliguri, about 600km from Kolkata.

But the leopard stood its ground, crouching on a wall, hissing and attacking those who came near.

It injured six villagers, a policeman and four forest guards before being hit with a tranquiliser dart on Tuesday. The people are recovering from their injuries, mostly swipes from the cat’s claws.

The cat died within hours after the showdown, and a post-mortem is being conducted.

Leopards are protected in India, though more are straying into villages for food. – Sapa-AP