An entrepreneur’s fight to survive 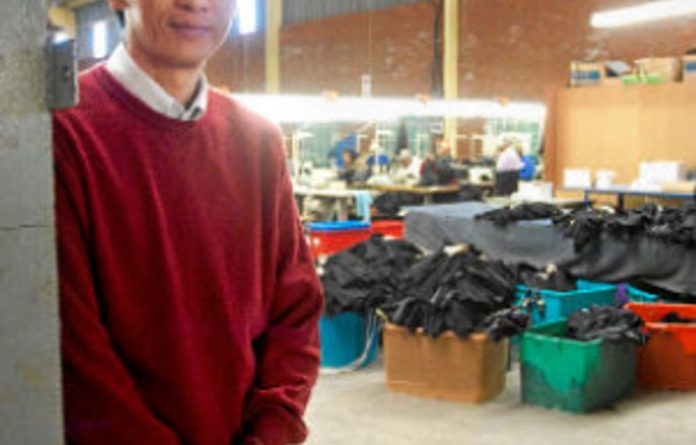 Alex Liu’s parents came from Taiwan to Newcastle in 1989 and set up a toy factory. Ten years later they invested in the Win-Cool clothing factory.

Liu himself came to South Africa in 1993. Today he speaks English fluently and fast, but with a strong Chinese accent. The factory his parents set up was a good idea for only a short time. In 2002 the exchange rate of R12 to the dollar favoured exports, but by 2003 it had plunged to R7 to the dollar, making exports difficult. And United States tariff concessions (under the African Growth and Opportunity Act), which favoured less-developed nations in Africa, meant that clothing manufacturers were setting up in Swaziland and Lesotho and exporting into South Africa at zero tariffs because of the customs union.

There was even worse news in May 2003, says Liu. The minister of labour granted the bargaining council the right to extend its jurisdiction to factories outside metropolitan areas. By the end of 2003 bargaining council officials were visiting Newcastle to enforce the much higher minimum wages to which the workers were now entitled.

In 2001 Win-Cool had employed 300 people; by early 2004, after it had to raise wages by about 30%, employee numbers had dropped to 200. The same labour shedding happened in other factories. By 2006 all the big clothing factories in Newcastle — Nantex, Nova and Richfin, which employed more than 1 000 workers each — closed. They were essentially killed by their overheads and rising labour costs.

Liu took over management of his parents’ factory in 2005. Between 2004 and 2008, he says, the bargaining council was “still relatively reasonable”. Win-Cool and other smaller factory owners in Newcastle tried to comply, increasing their wages by about 50% over that period.

But in 2006 another blow came. The bargaining council’s provident fund and other levies (for HIV, and an “agency” fee) were extended to non-metropolitan areas. Effectively, this meant that wages were increased by another 10%. Again, the factories that remained outside the bargaining council were not ­consulted, Liu says.

In 2008, mainly because of the provident fund blow, Liu decided to close the Win-Cool factory and retrench all its workers. But shortly thereafter, some of the former employees visited his parents (who still live in Newcastle) and asked them to make a plan to start up again. Liu decided that the only way this could be done was through a co-operative that would not have to fall under the bargaining council but under the Co-operatives Act.

Simunye, the co-operative that was set up, today consists of about 100 members. Win-Cool now ­procures orders for the co-operative. Liu is employed by Simunye as a “general worker” at a salary of about R1 500 per fortnight — he is one of its seven relatively highly paid members.

The workers in the co-operative earn a basic wage of R250 a week. But they are subject to an incentive scheme, which means that some earn up to R630 a week. This compares with the bargaining council’s R489-a-week minimum wage for the clothing industry in non-metropolitan areas (it will rise to R569 next year).

Liu acknowledges the obvious: that these are cruelly low wages. But he also points out the equally obvious: that they offer a start and an opportunity to gain skills, often to the most vulnerable in society – many of the workers are single mothers who cannot get other employment.

Liu believes the low wages provide a safety net for the workers concerned. Creating co-operatives has become a fairly common way of avoiding the tightening grip of the bargaining council and it is understood that there are now about 200 of them in the Durban area. But the co-operative form is best for smaller operations; anyway, the South African Clothing and Textile Workers’ Union is soon likely to seek changes to the Co-operatives Act to prevent circumvention of minimum wages.

In the past three months Liu has been involved in three court cases against the bargaining council and the union. Like other Chinese-origin factory owners in Newcastle, he has been under tremendous pressure to say he will at least comply with the “70% to 100%” minimum-wage regime.

Liu says he is being overwhelmed by the union and bargaining council — he sees the council as part of the government and because of the huge funding the union has built up in its investment fund he believes it is unconcerned about factories closing down.

Although his family’s clothing factory has closed, Liu remains involved in the industry because he does not want to be seen as a quitter. “I still believe the manufacturing sector should be part of the economy of South Africa. I will fight for it until I am defeated.”