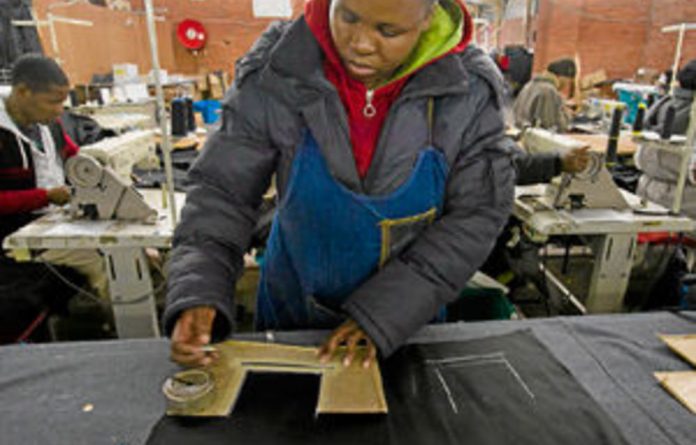 The Newcastle clothing industry has become a metaphor for the crucial debate about jobs in South Africa: whether we will create many entry-level, low-wage industrial jobs or improve the lot of the holders of the declining number of existing ones.

A recent Centre for Development and Enterprise report on unemployment in South Africa says that the country needs to learn the lessons presented by Newcastle’s clothing industry. In this town, which has an unemployment rate of 60%, workers are willing to accept wages below the minimum levels prescribed by the industry’s bargaining council. As a result, the centre says, Newcastle is attracting more clothing factories.

South Africa has about 1 800 clothing factories — many of them very small — of which perhaps 300 are compliant with the bargaining council’s minimum-wages requirement. The rest of the industry is hovering near closure, particularly because of competition from imports. This is being mirrored, more or less, in most manufacturing industries across the country.

Newcastle was the site of a unique event in September last year: an employers’ strike. It occurred after a long and convoluted history of non-connection between a shrinking group of Chinese-origin factory owners (many of whom are now South Africans) in Newcastle and the South African Clothing and Textile Workers’ Union, which dominates the industry’s bargaining council.

The three-day employers’ strike came about because a group of employers in the Newcastle Chinese Chamber of Commerce and Industry stood its ground in saying that it was impossible to pay the statutory minimum wages that the bargaining council had begun to enforce by closing down non-compliant factories. The minimum wage set by the council is R489 a week for the clothing industry outside metropolitan areas (it will rise to R569 next year).

When the town sheriff, executing an order from the bargaining council, shut down one Chinese-owned factory called Wingtong, other members of the community also closed their factories — interestingly, with the support of their staff. Wingtong workers demonstrated on top of their worktables and threatened to burn down the sheriff’s house and the office of the bargaining council.

Employers’ strikes are virtually unheard of in South Africa, where employers seem to be congenitally timid in the face of aggressive union action. Alex Liu (42), a naturalised South African from Taiwan and chair of the Newcastle Chinese chamber, led the employers’ strike. He admitted that the industry is probably doomed in South Africa. Theoretically, the bargaining council is a joint venture between employers and the union, but Liu believes the union has intimidated employers, who have submitted partly because they want to be sure of union support in getting government incentives.

He said that, increasingly, the “compliant employers”, who belong to the bargaining council, believe that subsidies will save them. They may be right — late last year the government, through the department of trade and industry, instituted a subsidy scheme of between R400-million and R600-million for the clothing industry.

Renato Palmi, a consultant to the industry, said: “Some compliant companies are in high-margin products and receive subsidies and soft loans. Also, many companies are paying lip service to compliance because there is huge intimidation throughout the industry. Many compliant factories allegedly subcontract to non-compliant factories, and even if a former non-compliant company commits to being compliant it can still renege, downsize or close, so compliance doesn’t mean sustainability.

Funders of the industry
“The bargaining council is an old boys’ club and the employers in it are as much at fault as the unions for the dire situation in the industry.”

Liu does not believe it is unsustainable that taxpayers fund the industry. But he does not agree with the union view that import tariffs should be increased to save the industry. Already, tariffs for clothing imports are at 45%, resulting in growing illegal imports.

“How much higher can you make them?” Liu asked. “Higher import tariffs would just make it more expensive for the consumer. South Africa has to face the fact that it needs to be competitive.”

The government reportedly earns between R200-million and R300-million a month from the high import tariff — more than enough to continue subsidising the industry.

The situation for the clothing factories outside metropolitan areas has come to a head in the past three years. Of the estimated 1 800 clothing factories of all sizes in South Africa, perhaps half are not in these areas and almost all are non-compliant (although some have said they will be compliant in future).

In May 2010 the union embarked on a “clampdown campaign” to enforce adherence to the bargaining council’s minimum wages. Liu canvassed his members on the size of a sustainable wage that would allow their factories to survive. Similar consultations took place elsewhere in South Africa.

Subsequently, in a rare show of unity, both the compliant and non-compliant companies proposed a minimum wage of R280 per week for qualified machinists in companies outside metropolitan areas and R300 for those inside, with productivity incentives. The momentarily united employers said that these levels would result in the creation of more jobs.

Thereafter, in a series of manoeuvres that involved Minister of Economic Development Ebrahim Patel, who is a former general secretary of the union, this proposal was effectively rejected. But the compliant companies, under the Apparel Manufacturers of South Africa, agreed to pay 70% of the minimum wage immediately, phasing in to 100% within 16 months (that is, by April 2012).

After Patel’s intervention, the sheriff attempted to shut down the non-compliant Wingtong factory in Newcastle; the same was happening in many places elsewhere in the country. For a change the government — in the person of the Free State minister for economic development — took action, persuading the parties involved to observe a 30-day moratorium.

But thereafter the bargaining council juggernaut resumed, said Liu. There have been regular closures of non-compliant factories since then — with no fanfare, but with escalating job losses. And that is where the industry is today.

Liu has told his chamber members that they have to comply with the new wage regime or be closed down. He said that some of them have signed, or will sign the 70% to 100% undertaking, but they will, in fact, not be able to pay it, especially when it rises to R569 in non-metropolitan areas next year.

It has been speculated that this group is playing for time to be able to relocate to neighbouring countries. Bargaining council officials have so far not tried to close any of them down. It has also been said that the final closure of the remaining clothing factories will prove politically unacceptable and something will be done, but this seems unlikely. It is more likely that the workers will not even demonstrate, as some did in September 2010, but will accept their fate.

A clothing worker, who did not want to be named because of intimidation threats, said: “The unions say they are going to represent us with our problems. Because of these promises people join the union. The unions go to the employers and complain about wages. The employers say they cannot pay that much and the unions lead the toyi-toying and striking.

“I came out of school and saw a lot of factories close because of higher wages. In the end [higher wages do not] happen, but the union goes on demanding their fees from the small amount that we earn. The union has never created one job.”